The purpose of this test is to examine individual glow plug operation through measurement of voltage and current. 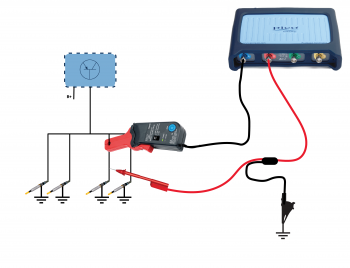 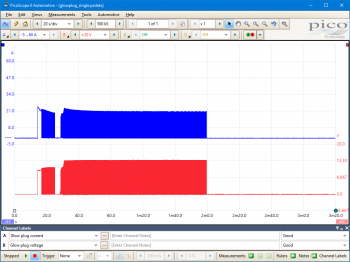 Channel B shows the voltage driving the current in the glow plug circuit:

Go to the drop-down menu bar in the lower left corner of the Waveform Library window and select glow plug current or glow plug voltage. 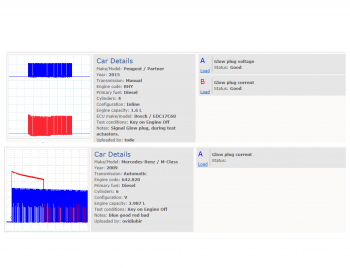 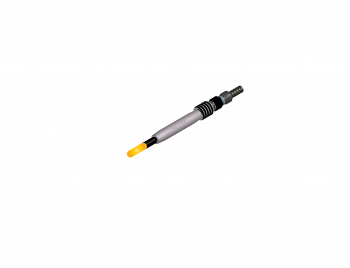 Different types of glow plug are available, with rapid glow systems replacing the traditional direct current type. The later systems tend to use ceramic glow plugs, reducing the glow wait time by more than 50%. Their operating temperatures are in the range from 1000° to 1100° C. Manufacturer specifications vary but these systems are not activated with ambient temperatures above 9°C or if the vehicle is driven and engine speed exceeds 2500 rpm.

Rapid glow plugs have two coils internally connected in series, a small heating coil at the plug tip and a larger regulating coil within the plug case. These systems use Pulse Width Modulation (PWM) of the supply voltage to regulate the circuit current and to control glow plug temperature.

Pre-heat: increases the temperature of the cylinder charge within the combustion chamber prior to start up. As soon as the glow plug temperature has stabilised after their initial activation, they will be switched via PWM to prevent overheating.

Engine cranking: the glow plugs are deactivated to ensure maximum battery capacity is available for the starter motor.

Post heat: the glow plug temperature is regulated via PWM whilst the engine is running. This helps to reduce engine cold running noise and emissions. The post heat run time can vary greatly as it depends on a variety of environmental factors, the engine conditions, and the system design.

Warning:  it is often impossible to distinguish standard and rapid glow type glow plugs by visual inspection. Many of the latter systems operate at lower voltages, such as 4 to 5 V or 7 V. Therefore, glow plugs must not be tested using a directly applied voltage, such as that from the battery positive terminal, a test probe or other test device. An unregulated current through the glow plug will cause irreversible damage.

The most common glow plug fault is a thermal failure from overheating.