The purpose of this test is to examine the primary voltage and current on an external coil type ignition system. 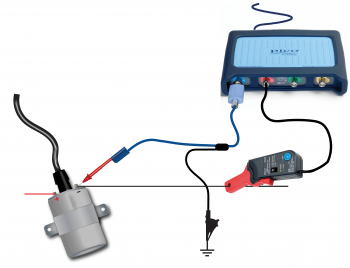 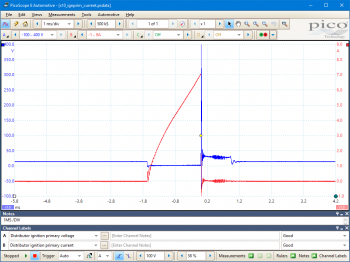 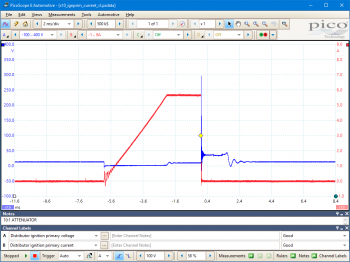 In the Non-current limiting waveform example Channel B shows a rise in primary current taking just over 5 ms and reaching around 5.5 amps maximum.

Channel A shows a primary voltage with good characteristics reaching a peak voltage which is over 300 volts.

Your waveform may show a Current limiting system. In this waveform example on Channel B you can clearly see the peak current is limited by the ignition system. You will also see the current build time is much shorter.

Channel A once again shows a good primary voltage. In this waveform you will also see the characteristic jump in voltage at the point the system limits the current rise. 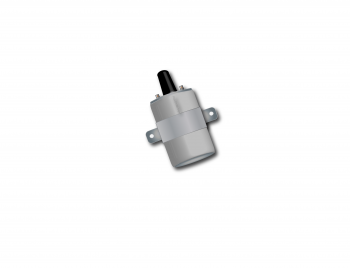 The induced voltage is determined by,

Dwell is measured as an angle, with contact ignition, this is determined by the points gap. The definition of contact ignition dwell is the number of degrees of distributor rotation with the contacts closed.

As an example, a 4 cylinder engine has a dwell of approximately 45 degrees, which is 50% of one cylinder's complete primary cycle. The dwell period on an engine with electronic ignition is controlled by the current limiting circuit within the amplifier or control unit.

The dwell angle on a constant energy system expands as the engine speed increases, to compensate for a shorter period of rotation and maximise the strength of the magnetic field. The term constant energy refers to the available voltage produced by the coil. This remains constant regardless of engine speed, unlike contact ignition where an increase in engine speed means the contacts are closed for a shorter time and gives the coil less time to saturate .