The purpose of this test is to investigate the engine coolant cooling fan operation by monitoring the control unit signal and motor current draw through varying fan speeds. 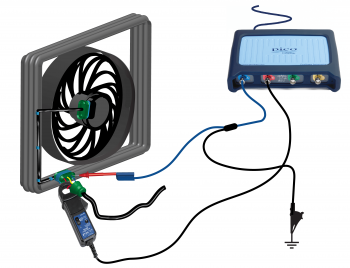 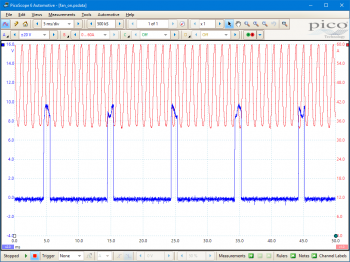 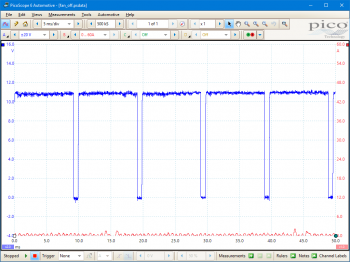 The example connection was made on a BMW vehicle. This system varies the fan speed by a change in duty cycle of the signal. The fan is at rest at 10% and at maximum speed at 90%. The fan or fans have a constant-voltage supply with the earth return path being switched though the vehicle's electronic control unit (ECM).

Go to the drop-down menu bar at the lower left corner of the Waveform Library window and select, cooling fan current or cooling fan voltage. 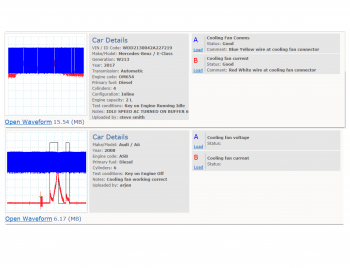 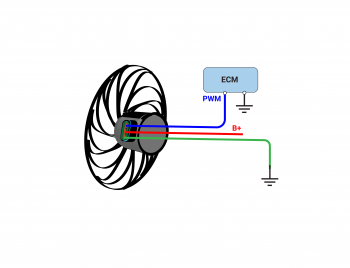 Many motor vehicle manufacturers now use variable-speed engine cooling fans within their model ranges. The advantage of a variable-speed engine cooling fan is that the engine is better able to control its operating temperature under varying conditions. The cooling fan's speed reduces as the vehicles road speed increases, because a larger volume of air naturally passes through the radiator. There may also be an input into the vehicle's electronic control module (ECM) from the vehicle's climate control unit.

The signal (blue trace) shows the cooling fan's earth return as a 0 to 12 volt square wave that is modulated at a frequency of 110 Hz. The ECM adjusts the fan's speed by altering the square wave's pulse width.

Depending on the manufacturer, the fan or fans may continue to run after the ignition has been switched off until the engines reaches a predefined temperature.

Ensure that the fan operates at varying speeds by monitoring the duty cycle on the cooling fan's earth return. This can be monitored using either an oscilloscope or a multimeter set to dwell. If the fan's duty cycle fails to increase with increasing engine temperature, the vehicle's ECM needs to be tested by a specialist to ensure that this function is working.

Operate the climate control and ensure that the duty cycle increases. The increase in duty cycle is required to pull more cool air through the air con's condenser, located in front of the radiator.

Note: Before condemning any of the vehicle's components, ensure that the particular model has the function being tested as there is a wide variation between both manufacturers and individual models.

The connections to test this fan on a BMW vehicle were made at the multi-plug by the top of the radiator cowling. The three wires were: power supply (red/blue), an earth (brown) and the signal from the ECM (yellow/red).