“Can you tell me if disabling the PCV system will affect the crankcase waveform? Similar to blocking off the excessive loss in the exhaust by capping off one outlet. I would assume that the intake vacuum will have some influence on the waveform by way of the PCV system. Have you done any comparisons with and without the PCV involved?”

Thank you for the question above. Like always, access is everything and the PCV valve is no exception. Recent testing of a 1.8 litre Prius enabled a comparison crankcase pressure test with the PCV operational and then blocked. The capture below is from a test carried out at idle speed only with a warm engine.

Blocking the PCV most certainly increases crankcase pressure, which will improve resolution and will amplify anomalies that may be disguised under normal crankcase “breathing” conditions.

I found it interesting how idle speed was affected during the “blocking” and releasing of the PCV hose (78 rpm), but not surprising given that the conditions in the intake manifold will change without crankcase fumes contributing to airflow.

You can use momentary blocking of the PCV while monitoring the engine speed at fixed intervals (1000, 2000 & 3000 rpm) to provide a crankcase pressure signature during routine maintenance (reviewed during each service) or as a technique to adopt during diagnosis. 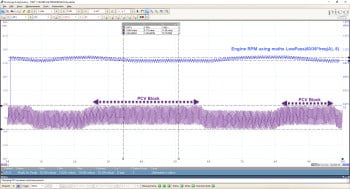 This is an interesting question for sure and one we are all going to ask as these vehicles will be mainstream long before full EV’s arrive.

While I was locating a 48 V Mild Hybrid in order to carry out a relative compression test using PicoScope. While I was searching, I thought it would be a good idea to look at a Power Split Hybrid (Prius) as these vehicles are widespread in various forms from Toyota/Lexus.

The relative compression test can be handled using the scan tool’s Hybrid System Utility menu to put the vehicle into Compression Test Mode. The fuel and ignition systems are disabled and the engine is rotated via Motor/Generator 1 (MG1) at approximately 250 rpm. Does this sound familiar?

The same procedure applies if you wish to rotate the engine to carry out an absolute compression test with a gauge or pressure transducer.

By using the scan tool software, we then graph the speeds of each cylinder to determine the “balance” between cylinders based on their respective speeds.

I must add here that during cranking, the engine/transmission emits an awful knocking/clanging noise, which is typical of these hybrid units thanks to the planetary gear arrangement (power split device) and transmission input damper (similar to a clutch plate).

The question, therefore, is how we measure cranking current/voltage with these systems (to obtain relative compression) while the engine is rotating, given that MG1 utilizes a 3-phase voltage and current via the High Voltage system?

In an ideal world, you should not have to, but if you do, the relevant training and qualifications are paramount.

What is interesting about this capture, is the low level of current required to crank the engine thanks to the high DC voltage.
The DC current flow from the HV battery to the inverter is approximately 5 A DC.
The AC current via W1 winding of MG1 is approximately 4.5 A AC.
Also, note the minimal voltage ripple present at the HV DC battery at approximately 206 V DC.

I think we have to agree that to confirm relative compression as serviceable from these signals alone is going to be challenging.

You can find more information on math channels here: https://www.picoauto.com/support/topic21311-10.html#p97972

I have used two math channels in the image above to try to remove the impact upon the Crank math channel from the missing teeth of the pick-up ring, as no data is drawn when using Crank(A,36) at each missing tooth.

I am not sure if it helps, but I have included the following alternative LowPass(60/36*freq(A),50) if required.

The math channel highlights uniformity across 720° of crankshaft rotation with an equal fall in crankshaft speed during the compression event (approximately 90 rpm). 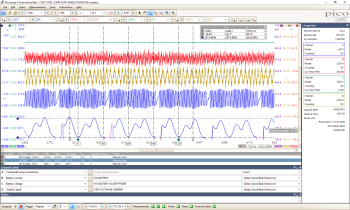 Note how we have captured a momentary reduction in crankshaft speed (almost like an interruption to acceleration) during the acceleration of the crankshaft (post-compression TDC). This event may be caused by the delayed closing of the intake valve during the compression stroke of the opposing cylinder (approximately 60° ABDC) and demonstrates the Atkinson Cycle used for this style of engine. The intake valve close event can be delayed by up to 102° ABDC, which is amazing when you think your effective compression is generated in only 78° of crankshaft rotation.

Another possibility is the intervention of planetary gear “activity”, given that MG1 rotation is connected to the crankshaft via a planetary gear set and transmission input damper. More investigation is required but great for future knowledge.

Below we have the same compression test but with cylinder 2 spark plug removed. We must bear in mind that removing a spark plug is not the most realistic representation of a low compression, such as a poorly seated valve which will allow for some compression to build and therefore apply load to MG1.

With the spark plug removed, we introduce a dramatic, momentary acceleration of the crankshaft, which introduces backlash with the planetary gear arrangement between MG1 and the crankshaft. (I believe we can see this activity in the math channel below.) 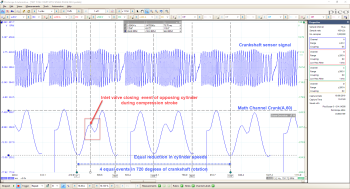 I have annotated the sections of the math channel waveform where no data is drawn due to the missing teeth. While this may not be 100% accurate, it helps to reveal the trend of the crankshaft during the “passing” of the missing teeth.

Notice above how we now have 5 events within 720° of crankshaft rotation instead of 4 (Planetary gear activity). We can see how the crankshaft uniformity has been lost and the speed fails to decrease sufficiently during the compression of cylinder 2, followed by a dramatic acceleration. (Peak to peak rpm is approximately 162 rpm).

Based on the information above, we can conclude that the crankshaft sensor remains our best option with these hybrid systems when evaluating compression in a non-intrusive fashion. Another option may be the resolver (speed and position sensor) for MG1, which is yet another avenue to explore in the future.

With thanks to Audi UK I have been able to capture such data from the following vehicle:
A8 V6 3.0 TDI (2018) 48 V Mild Hybrid Electric Vehicle (MHEV).

As the name suggests (Mild Hybrid), the vehicle utilizes 48 V cranking, charging, advanced stop/start (engine off during coasting) recuperation & boost function for the ICE. More information on the Audi Mild Hybrid system can be found in their SSP 664.

What a Mild Hybrid cannot do, is drive the vehicle solely on electrical power (unlike other options which include Series, Parallel, Dual and Power Split Hybrids).

The 48 V Mild Hybrid in its simplest form utilizes a 48 V Motor/Generator (MG) connected to the crankshaft pulley via a poly V belt. The MG, therefore, functions as our starter motor and generator where the 48 V output (when charging) is converted from 48 V to 12 V to charge the 12 V battery. (Note: The vehicle has a 12 V and a 48 V battery)

One additional feature of the A8 is that it still utilizes a conventional 12 V starter motor for starting the engine from cold. I am not sure why or whether this is specific to the Diesel model only, but I guess that is a topic to discuss another time.

What I did note while working with this vehicle, is that when I introduced a fault or allowed the engine to cool, it would crank via the 12 V system.

Below we have the vehicle starting via the 48 V system: 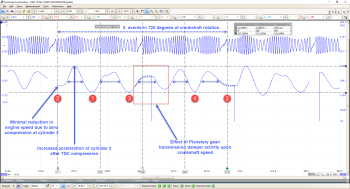 Below is the vehicle starting via the 12 V system: 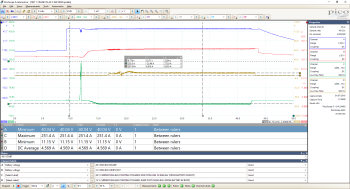 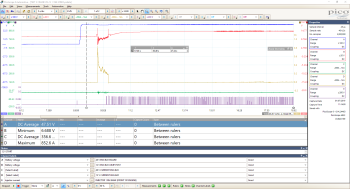 In the screenshot below, we have now lost uniformity of the crank sensor signal due to no compression on cylinder 1 (the glow plug is removed). Both signals can be used to determine compression loss. 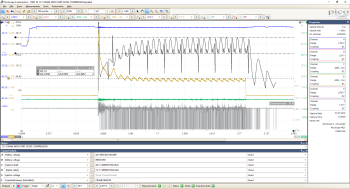 Next, we have 48 V cranking non-start with good compression:
Determining relative compression from voltage and current here looks challenging at best. 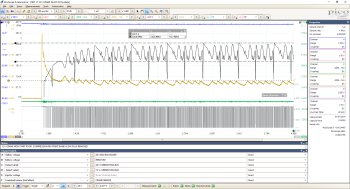 Looking closely at the crankshaft sensor signal we can see how the engine rpm rises and falls uniformly for every rotation of the engine. While I have no comparison to make, there are no known faults with this vehicle and we must, therefore, conclude that this is characteristics of cranking via the 48 V MG.

Below you can see a 48 V cranking non-start with bad compression (the glow plug cylinder 1 removed) and disruption to the uniformity of our crankshaft sensor signal. 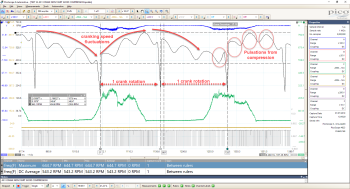 Look a little closer, and we can see the effects on crankshaft signal uniformity thanks to a loss of compression on one cylinder. 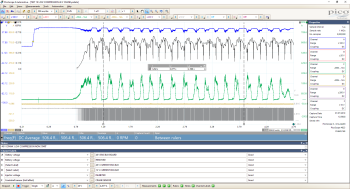 With all the above, we can, therefore, conclude that the crankshaft sensor signal is going to be paramount for future relative compression tests for all forms of Hybrid vehicles.

I have added some additional maths, looking at further comparisons between the 48 and 12 V systems, here.

A little off from Hybrid but in keeping with engine testing:

I thought it would be useful to include the forum post about Mazda Rotary Engine compression testing too. 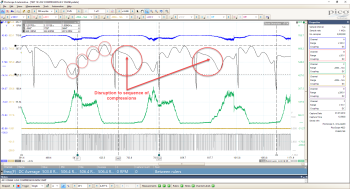