Following on from MAF calculations for turbocharged vehicles here, I have been thinking about DPF back-pressure and in particular, a Toyota formula used for checking DPF breathing efficiency.

The formula states that dividing DPF differential pressure by MAF should result in a value below 0.2 if the DPF is not restricted.

The formula uses serial data obtained during a road test with the DPF temperature stable > 450°C.

Given that we can calculate MAF using PicoScope, I wanted to test this theory with a couple of non-Toyota 2.0-litre diesel engines.

There are a couple of variables to consider before we start condemning DPFs:

1. I will be using a WPS500 pressure transducer inserted before the DPF and not across the DPF as with a differential pressure sensor.

3. I will be using a WPS500 to measure the inlet manifold pressure.

To break the math channel down:

We have RPM calculated using LowPass(freq(A),50)

This gives a “smoothed” rpm value and reduces the spikes from the crankshaft's missing teeth.

N.B. the crankshaft signal (Ch A) is hidden from view in the example waveform below.

Now the formula to evaluate the breathing efficiency of the DPF requires exhaust differential pressure captured in kilo Pascals kPa. This is where one of our variables creeps in as we are going to measure exhaust back pressure using a WPS500 inserted into the pressure sensing hose before the DPF and not across the DPF.

Channel D will be measuring exhaust back-pressure in bar using a WPS500 and so to convert to kPa we are required to multiply Channel D by 100.

Now to complete the entire formula which is: DPF Differential pressure (kPa) / MAF (gm/sec) we use

Remember that the theory states we should obtain a value of less than 0.2 for an efficiently breathing DPF. The results below make for an interesting discussion! 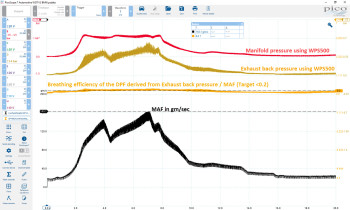 As we can see, throughout the majority of the test we are below the magic “0.2” value but it creeps above 0.2 during WOT. (This may be due to the variables I discussed above.)

Since the performance of the vehicle is fine, I am happy to accept the results above and agree there appears to be some logic to the theory of DPF back pressure / MAF = DPF breathing efficiency.

Next is another 2.0-litre diesel, a SEAT Alhambra engine code BRT. I used the same configuration as the BMW above (WPS500 installed into the inlet manifold and before the DPF).

The SEAT Alhambra in question is the same SEAT discussed at length here. 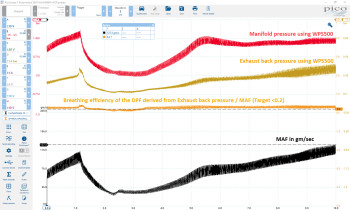 As you can see, when applying the same formula DPF back pressure / MAF = DPF breathing efficiency, we are predominantly above the magic 0.2 during acceleration. This suggests that the DPF breathing efficiency is poor! This is where I have my doubts and once again, we must be conscious of the variables. The above vehicle performed well under WOT conditions.

All in all, I wanted to share this theory as it appears to work well when simply grabbing data from a scan tool and carrying out the math’s, using serial data, grab DPF differential pressure (kPa) and divide by MAF (gm/sec).

Here is an example: 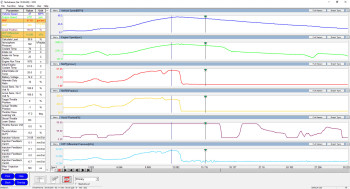 I hope this helps, and please feel free to experiment; having a data list displaying differential pressure (and not back-pressure) removes the main variable and so the scope may not be required. However, having the formulas above will help with graphing the breathing efficiency of the DPF over time.