When it comes to diagnosis, perseverance is key and never has this been more relevant than in the following case study.

If at first you don't succeed...you know the rest.
This case study follows post- purchase rectification of a 2007 VW Caddy 1.9 TDI (Engine code BLS). The Caddy was purchased at auction during the summer with the knowledge that the vehicle was not running at its best, but was "running"!

How this differs from a normal case study is that we do not have a customer complaint. In this case we are assisting with a local rectification project, when the owner called upon us as the going got tough.
The initial symptoms surrounded engine vibrations, engine noise, lack of power and poor starting.
To cut a very long story short the following items were replaced by the owner, curing the performance and balance issues, but leaving the starting issues:

Now had this been a customer's vehicle, can you imagine the cost and explanation to go with each repair above? Knowing the history of the vehicle it proved too much of a temptation to not get involved and apply the PicoScope.
To begin, a basic inspection is invaluable and proved that all the above repairs had been carried out correctly and the fuel quality to be normal. The prolonged cranking symptom was confirmed and easy to reproduce regardless of engine temperature. Once running, the performance of the vehicle was fine with no drivability issues.

The engine warning light remained on but with reference only to EGR (which was removed by owner).
Cranking the engine in the fault condition confirmed air pulsations from the exhaust tailpipe but no fumes or smoke, suggesting no fuelling during the cranking period (cranking could often be as long as 15 seconds before the engine would fire and run!).
Thinking this through and accounting for the history above, compression, valve timing and injector signals had to be high on the list of probable causes knowing the timing belt had been replaced and no fumes or smoke were present during cranking at the tailpipe.

The capture below looks at Crankshaft-Camshaft-Starter Motor current and Injector signals during cranking. Here we kill a number of birds with one stone confirming that Crank and Camshaft signals are present, injection events are taking place, relative compressions peaks are even and cranking speed is correct based on the frequency calculation (see below on how we calculate cranking speed). 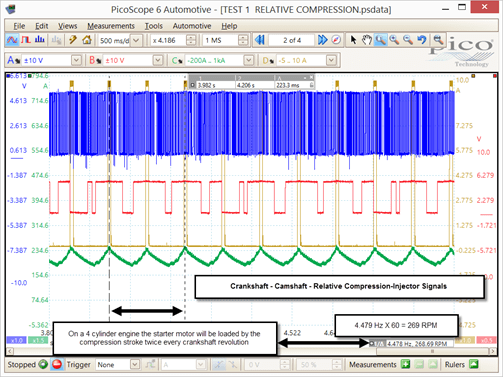 Placing both time rulers to indicate 2 X compression peaks for each revolution of the crankshaft allows the software to calculate the frequency of these peaks (4.479 Hz). Frequency is measured in cycles per second, so multiplying 4.479 Hz by 60 we arrive at cycles per minute, better known as RPM. The test confirmed a cranking speed of 269 RPM.

Now we have confirmation injection events are taking place (at what appears to be TDC), how can we confirm the correct valve timing based on just a good signal from the Crank and Cam sensors?
This is where the Pico Waveform Library came into play. A browse of the waveform library using the search tool found a similar waveform from a known good engine, uploaded by a Pico user.

Access to the waveform library is via the File menu, requires an automotive PicoScope to be connected to your PC and a valid username and password to the Pico Automotive Forum. 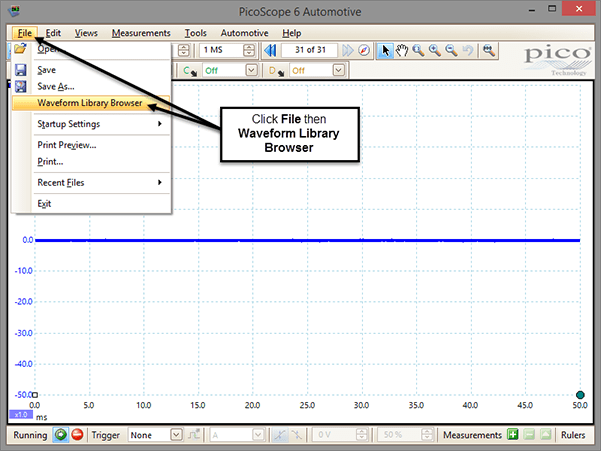 The waveform library image demonstrates how searching for "VW, CADDY, 2001-2008, BLS" found an identical match from 1077 uploaded waveforms, allowing the Crankshaft and Camshaft correlation to be confirmed in a non-intrusive fashion. 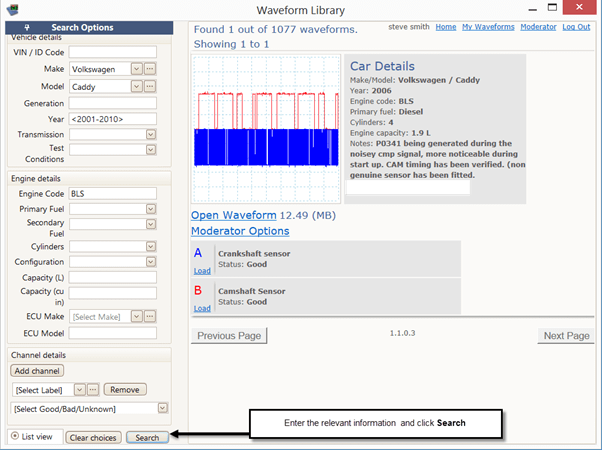 Here, we can see the downloaded waveform from our waveform library with the correct valve timing. 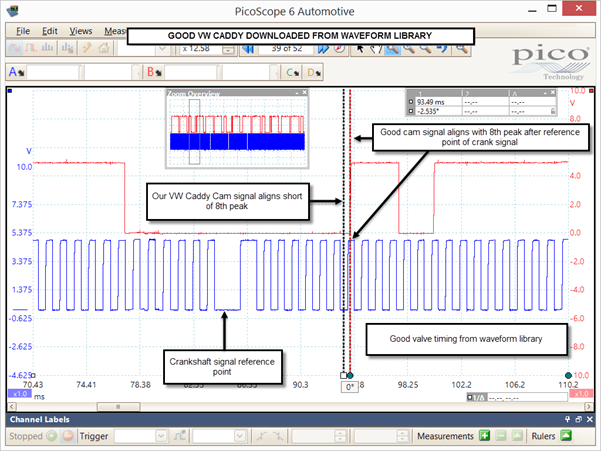 The image below confirms a valve timing error with our VW Caddy, where the Cam signal does not align with the 8th peak of the crankshaft signal after the reference point. 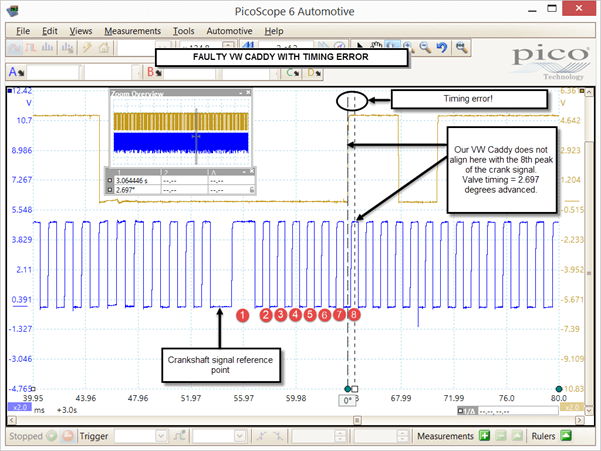 Using the Rotation Rulers to indicate 0 to 720° degrees of crankshaft rotation and the zoom function of PicoScope to see more detail in the area of interest, we then introduced the Time Rulers to indicate the alignment error between the Crank and Camshaft signal. Not only can we measure the time difference between the camshaft and crankshaft, we can now measure the error in degrees of crankshaft rotation with reference to the rotation rulers.
Looking at the zoom overview it is easy to see just how much detail has been revealed without compromising resolution given we have 1 Million Samples on one screen. We can clearly see each individual peak (tooth) of the Crankshaft and Camshaft signals and bear in mind the engine is running at idle speed!

The known good waveform confirms the relevant peak of the camshaft sensor signal to align directly with the 8th peak of the crankshaft sensor signal after the reference point.
The identical camshaft signal peak from our problematic Caddy does not align with the 8th peak after the reference point, but falls short by the equivalent of 2.6 degrees of crankshaft rotation.
Looking at the timing error (2.6 degrees of crankshaft rotation) we know we are not looking at the timing belt being 1 tooth out as this would equate to 16°+ given the crankshaft sprocket has 22 teeth per crankshaft revolution (22 X 16 .3 = 360 degrees). 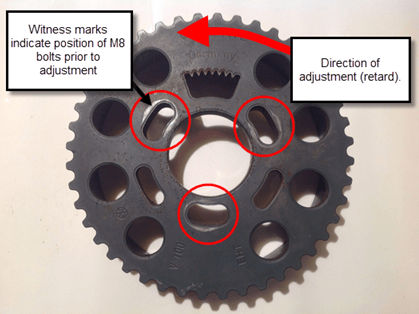 A swift adjustment was made to return the sprocket to its original retarded position (based upon the witness marks) and the valve timing re-checked to confirm all is OK. 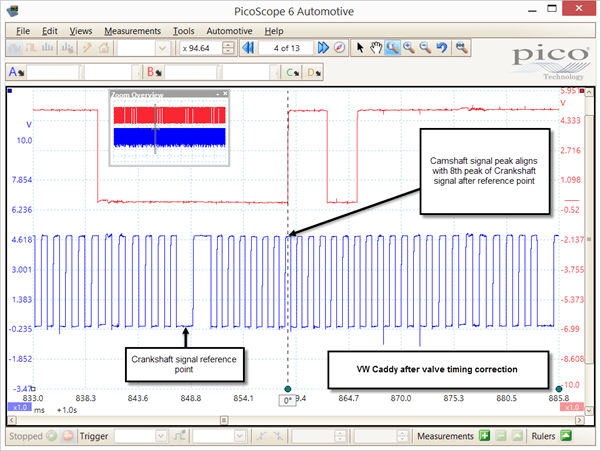 At this point it would have been great to say the starting issue had been resolved, but the truth is...NO! The poor starting symptom remained present with cranking time exceeding 15 seconds before start up! Time to recap:

The lack of exhaust fumes during the cranking stage led us to check to fuel delivery and pressure testing using the WPS500 pressure transducer.
Here we have utilised the WPS500 with a sight block to monitor the diesel positive priming pressure by connecting into the fuel feed hose, and the Tandem Pump delivery pressure via the test port built into the Tandem Pump body. 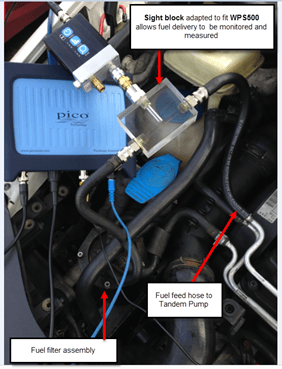 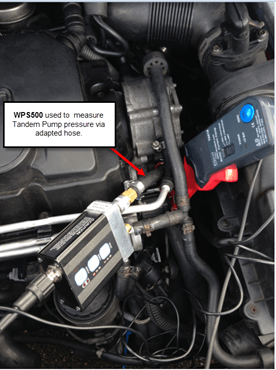 The waveform capture that followed confirmed our suspicions:
Priming pressure and fuel condition proved to be fine with no aeration of the diesel viewed through the sight block and adequate fuel priming pressure at ignition on and throughout cranking. The Tandem Pump however highlighted insufficient pressure for the engine to start (continual cranking would eventually result in sufficient pressure for the engine to start). 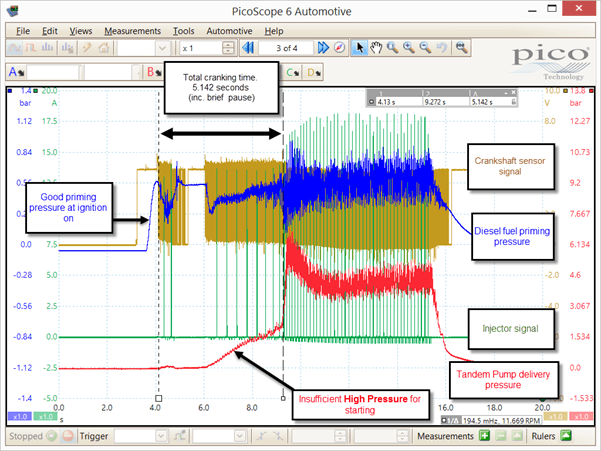 The waveform captured most certainly matches with the symptoms and explains why we have no initial combustion and no smoke via the exhaust during cranking. The question now is why (remember the Tandem Pump has been replaced and fuel priming is good)?
What became evident during the standby time (test equipment connected but engine off), fuel appeared to be passing from the sight block towards the engine followed by air bubbles until the sight block cleared of diesel fuel, suggesting a leak within the priming or high pressure circuit!
The priming circuit could be eliminated as no external leaks were present. We therefore had to concentrate efforts on an internal high-pressure circuit leak, so focusing attention on injectors, the only items that had not been replaced! 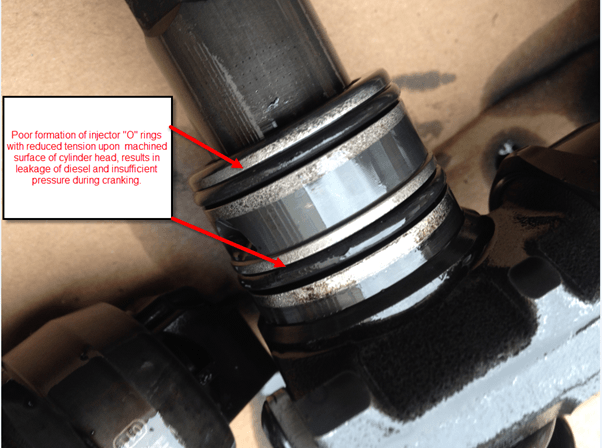 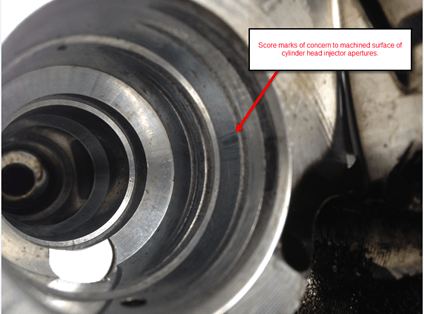 Due to the costs involved of replacing not only the injectors but the cylinder head assembly, nothing could be lost (other than time) by replacing the O-ring seals and hoping for the best! The good news then followed from the owner that the starting issue was cured, and so the scope just had to be connected to confirm all was OK.

On return to Pico, two sight blocks were used to monitor fuel priming and return pressures, whilst the Tandem Pump pressure was measured via the test port, utilising three WPS500 transducers. This gave a rare insight into the activity of the fuel delivery system of this TDI engine in real-time during the various stages of priming, cranking, idling, and shutdown whilst we had no reported starting or driveability issues. 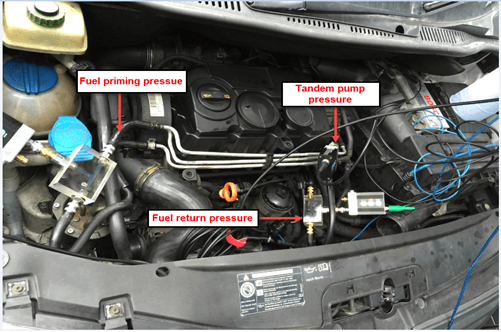 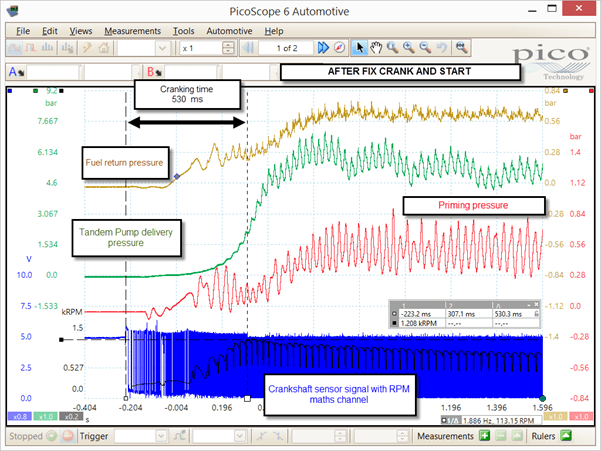 The waveform above confirms adequate priming pressure and a rapid build-up of Tandem Pump pressure upon cranking. Engine start is now achieved in 530 ms (1/2 a second).
Below we have an overview of the fuel pressure circuits from ignition on (priming), cranking, start up, idling, and finally shutdown at ignition off. 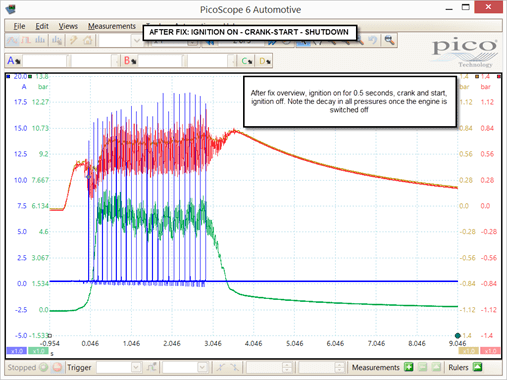 The following waveform revealed an unexpected scenario where the priming pressure at ignition on is equal to the return pressure. Notice also a slight increase in the Tandem Pump pressure that is also equal to priming and return pressures during the ignition off decay period. 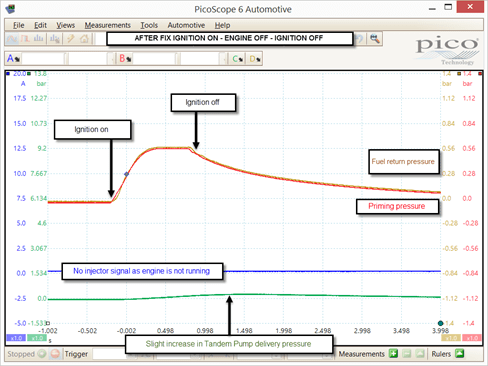 Whilst we had the luxury here to use numerous pressure transducers, had only one been available (as in the real world) we would have used a trigger at ignition on whilst measuring each pressure point individually. Saving each capture as a reference waveform we could then overlay each waveform to arrive at the same conclusion, assuming we keep the time frame and operational conditions identical.

The starting issues that were present from purchase in the summer to mid-winter have now been resolved after replacing the injector O-ring seals. The seals would appear to have leaked (internally) high pressure diesel supplied by the Tandem Pump, preventing adequate engine start. Prolonged cranking would eventually build the Tandem Pump delivery pressure to a point where the engine would start.

The owner had also reported a marked increase in the engine oil level, possibly as a result of contamination from diesel fuel leaking via the high pressure circuit, past the injector, into the combustion chamber and past the piston rings into the sump pan.

Since repair the vehicle has been used daily for over a month and covered numerous miles with no repeat issues and no increase in the engine oil level.

Hi Steve,
it is really a great case, i can learn a lot from it. i have a request, can you upload the high quality images and original pico files, thanks.

Many thanks for you great paper !
I had the same hidden problem of leaky injectors seals, and I followed your diagnosis procedure (with a manual manometer on HP probe screw), and bingo : slow pressure buildup while cranking.
I replaced the selas, and now it starts perfectly 100% of time.
You rock !
Regards,
Bob

I HAVE VWCADDY THE CAR CRANK BUT NOT START I CHECK ALL THE WIREING SYSTEM AFTETR THAT I SEE THE GLOW PLUGS LIGHT IS NOT ON. I NEED A SOLUTION

An awesome case study just go’s to show the picoscope it’s software and some careful thought of how and where to test it is possible to find almost any fault.

Great piece of patient diagnostics & great to see the use of the waveform library & the WPS500. We will now check out the library more often. Well done busta.

Excellent diagnostic approach. Please forward future pico releases to .(JavaScript must be enabled to view this email address)
As a lecturer, these are excellent training resources

Cam crank sync is easily checked with a diag tool. Any fuel pressure gauge would have worked in this case. Nice use of pico though.

i am not happy with the test hose you made up from the tandem pump it looks to be hose with a jubilee clip. a hydraulic type crimp hose is mandatory on this test port.

Thanks for an in depth, detailed case study with exceptional use of diagnostic tools.

Well done Steve a very interesting case and a bit of head scratching no doubt.

The marked increase in the engine oil level is a very clever observation. Very good case of study. Congratulations Steve

this is a common issue on 1.9 pdi engines for quite along time

Quite a challenge, but superbly and logically followed through to conclusion. These superbly-presented explanations clearly show the seemingly endless, time-saving and conclusive uses of PicoScope and its accessories. Another riveting read and another lesson in the bag. Thanks!

As the injectors are under the rocker cover , when the o,rings fail diesel leaks directly into the cylinder head crankcase and simply drains down into the sump, seen a few.