The Mercedes W140 S-Class V8 engine had developed an intermittent misfiring fault. The misfiring could be observed during idle speed when the engine was warm – however it was not a serious issue. Within a month it became apparent that as the engine coolant temperature reached 60 °C, the ‘intermittent’ fault became permanent. At this stage the car was still drivable, but had significantly less performance than expected and higher fuel consumption than normal. The engine has a Bosch LH-Jetronic (‘Luftmasse-Hitzdraht’) injection control with hot wire air mass meter, 2 ignition coils and 2 distributors. The ignition is controlled by a separate EZL (‘Elektronische Zündanlage’) i.e. ignition control module. There were no DTCs stored.

As an initial test, the injectors were cut off one by one in order to determine the cylinders at fault. It was found that with cylinders 1, 4, 6, and 7 cut off, the idle speed did not change. These cylinders are all fed by the distributor mounted on the right cylinder bank.

Injector 6 was double checked with the scope and was found working but unsettled. The injector open time changed quickly (±1 ms) and in turn the engine idle speed also changed: 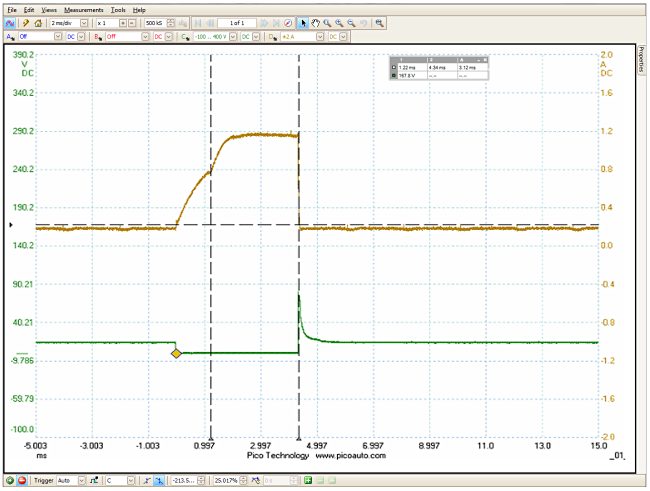 The king lead was checked and showed two typical waveforms: 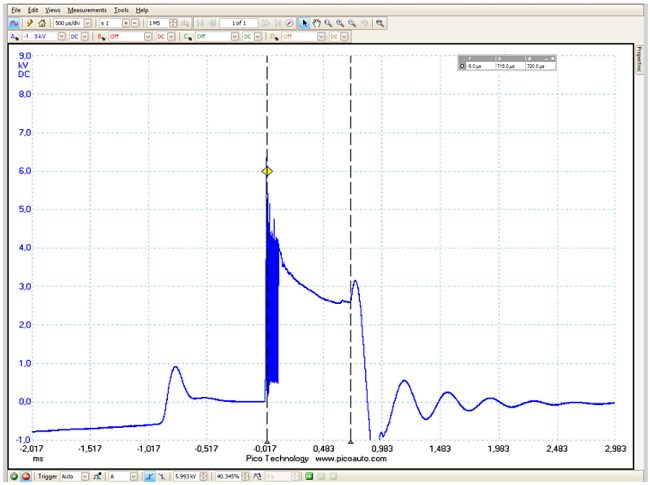 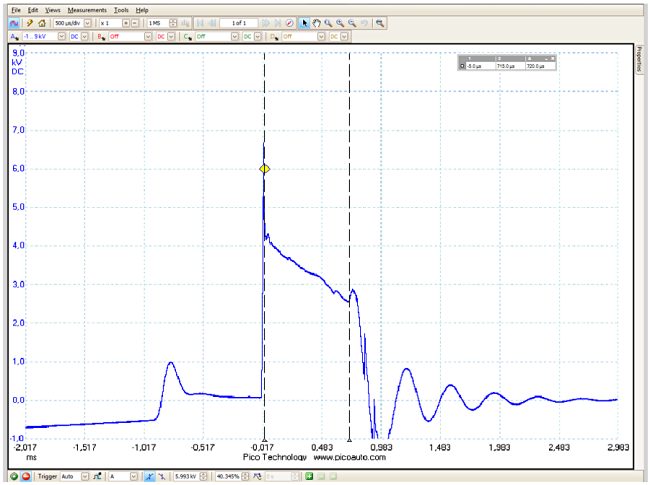 The spark plug leads were then checked at cylinders four and seven, and the kV was found too low and unstable returning waveforms such as the two below: 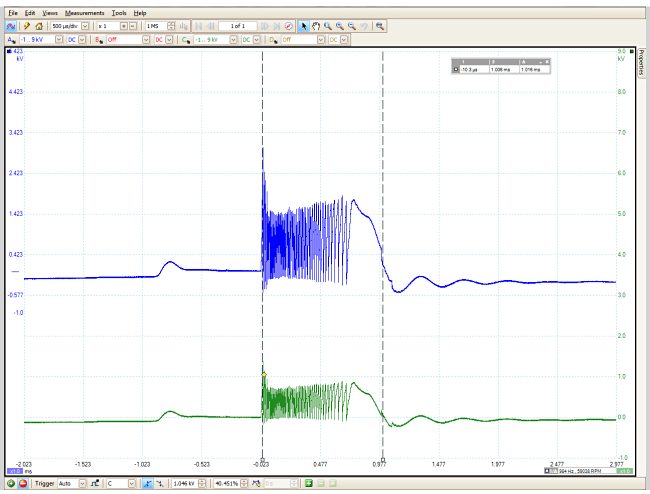 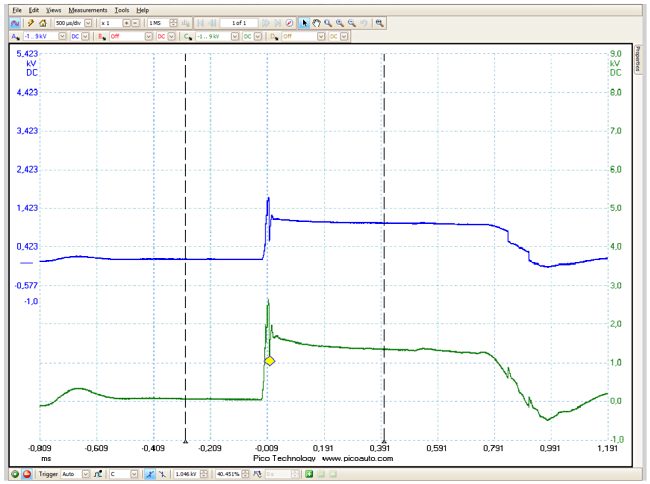 The primary ignition was measured and compared to the king lead. The primary voltage wave (Ch A) looked normal, but there were abnormal signals on the king lead (Ch B). Here is an example of a good waveform: 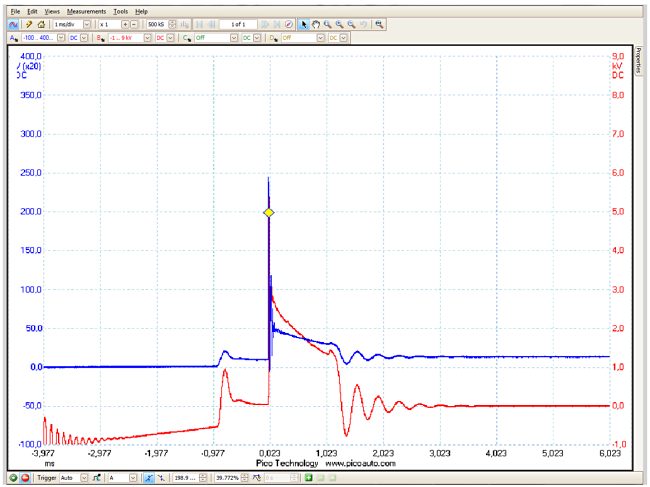 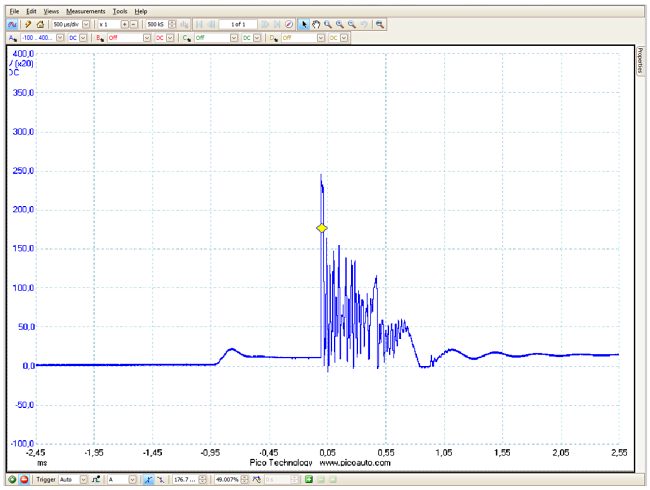 However, the primary current was showing normal signals: 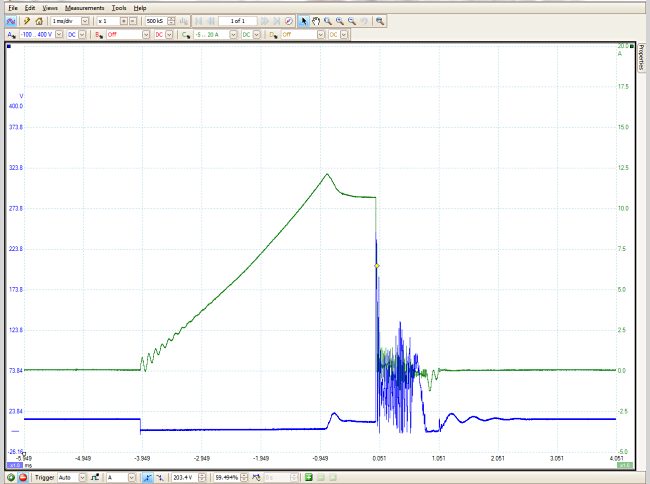 The first step to solving this issue was to replace all the spark plugs. This was done as they were all close to their 25000 km life span. In addition to new spark plugs, one suppressor with a new HV (High Voltage) lead was replaced temporarily. However, neither change solved or improved the problem we were experiencing. Through a process of elimination, the problem could now be identified as being with either: the coil, the distributor, or the ignition control module (EZL).

The interference at the primary ignition was misleading when viewing the diagnostics results. This was proven because the temporary connection of a good coil did not change the recordings. Due to this, we moved our attention on to the distributor.

Only once the distributor was removed, was it possible to see where the high voltages had broken through on the back side and jumped against the engine block. This resulted in all energy being lost under the cap, and nothing being delivered to the plugs. The problem had started when the misfiring at idle speed was first noticed. Various small cracks in the casing, starting from the distributor centre pin, were growing in length over a short time. The distributor was later cut for investigation to identify that cause of the problem.

The high voltage shot out at the glass fibre 1 kilohm resistor and made a conical hole in the casing.

n the above left image, the distributor is shown still in place; you can clearly see the discolouration in the middle. Both the centre and right images show the micro cracks.

Once the distributor had been replaced the waveforms showed the expected signals. 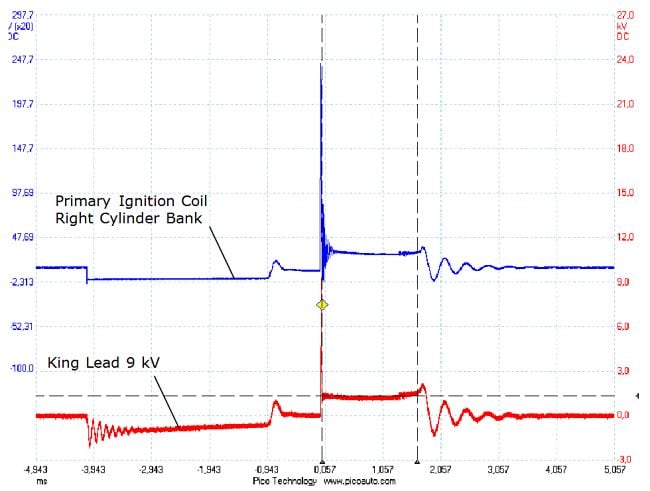 The capture of the waveforms did not take long, but the interference on the primary side was misleading, due to the ground signal being disturbed by the high voltage going into the engine block. Other than that no part was unnecessarily replaced and the fault was found even without stored DTCs.

The reason the distributor was not considered to be at fault earlier in the investigation was because it was almost new, having been replaced in 2007 and only been used for 25000 km.

Those who posted about misfires, backfiring, stalling, when warm, should change the bakelite dust shields (spark insulators) behind the rotor.  This is the part with the o-ring on it.  These develop cracks and when condensation forms in the distributor, the spark finds its way to the block rather than the spark plugs.

I’ve been searching for answers for this very problem for approximately 4yrs!!!!!!!!!! Yesssssssss, I’ve thrown a ton of money into different parts that didn’t do the trick as everyone else has. I have a 95 S420 w/130K on the dash. Reading other posts made me lean towards buying an EZL until I finally read this one. My rotors and caps were changed in 2012 and by 2013 this stalling problem started. So I was like, “it cant be the rotors…..” But after reading this, I will definitely look into purchasing new ones. (probably will get the EZL for gp)  Andy, is there a test that can be performed on the rotors or caps that would tell if their good or bad?

I have the same problem as many here with the M119 in my 400E….misfire, backfire, lose of power then completely stalls and won’t re-start when hot. Replaced crank sensor and ignition module. Caps/rotors/dust covers all look fine. These are the exact same problems written about here but nobody has re-posted how they fixed it. Can someone please update how they identified then fixed the problem. Thanks.

Hi I have same problem cuts out when hot and backfires when trying to restart fuel pressure steady at 3 bar live data good I.e temp and rpm. I have replaced crank sensor and ezl also new engine wiring loom as had coman fault with wire cracking. Also had new coils and checked injectors switching ok with noid bulbs . Did find that spark was intermitant and weak when fault occurs

Thanks for your feedback again, your English is fine. With reference to the Pico post above I would start by keeping things simple. Hoses, connections and fuel quality etc. Valve clearances as mentioned above are a good place to start assuming they are adjustable. Without a PicoScope you really are going to struggle and so it would be well worth joining our Forum and posting your concern under “Help me fix my car”. Here you can post more details about your vehicle where you will discover techniques from Pico users in our trade who most certainly will assist. Good luck.

Thank you for the reply. When my car is cold it run perfect. Stable idle, no missfire, no backfire, good power, good acceleration at WOT. When the car getting 80C and 5 min. later starts to interrupt, engine shaking, and died. In this moment i can crank i smell fuel and start exploding in exhaust. I think unburnt fuel goes to hot exhaust and detonate there. One year ago (10.000 km) i changed all ignition system: caps, rotors, plugs, wires from BERU. Also EZL is changed used but godd one. I dont have a osciloscope so i cant measure it and i cant drive to many km becouse i scare of my car will die in center of the city. What kind of mechanical issues you mind ? Really thx for help and sorry for my english 😊

Hi thx, for that post. Is rotor problem can be temperature related ? I ask becouse i have similiar problem with m119.970. When the car is cold the start and run perfectly. But when temp getting 80 C. then missfire and backfire and finaly shutdown. After that i cant run engine, cranks but only backfire to the exhaust. After couple hours i can start it without problem. Any suggestion ?

Hi Andy, my car is now fixed ! thanks to you

Currently I am going through misfiring 😊 this helped me a lot 😊 going to check the retor 😉 Thank You !

Thanks Andy,nice explanation.
Thanks very much.

Well done Andy,
I ran into similar fault with a Holden V8 Late model. Being a bit cheeky thought I was on track. Fault still there so pull out the PicoScope which soon showed something similar to your shots bleeding off hi voltage through a crack in a place I failed to see owing to it’s position.
The Scope would have saved me wasting time and my money in my business—live and learn!!

I often use secondary patterns as a starting point with engine issues before getting over involved in other areas.  The behaviour of the voltage ( particularly the spark voltage and burn line profile ) give a very good indication as to the nature of the fault as you have shown.  There is so much information in a primary and secondary pattern and yet many techs don’t go there.

This is a good example of how to test and not guess, nice work.  Who needs Googleostics when you can do that 😊

Great job Andy,and thanks for sharing the case with us. I’m a beginner but you explained it so well that I could easily understand it and convince me that I definitely need a Pico.