The purpose of this test is to investigate and examine the secondary voltage waveform from a Coil on Plug (COP) ignition unit using a COP probe. 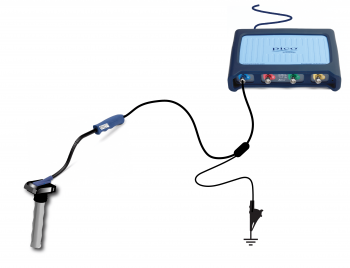 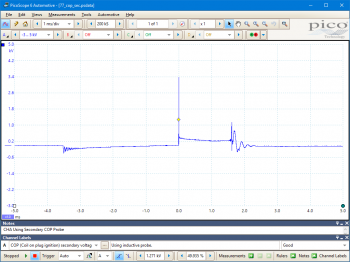 The ignition picture shown in the example waveform is a typical picture from an engine fitted with electronic ignition. The waveform has been taken from the coil on plug.

The coil oscillation period should display at least 4 peaks (including upper and lower). A loss of peaks indicates that the coil needs substituting. The period between the coil oscillation and the next 'drop down' is when the coil is at rest and there is no voltage in the coil's secondary circuit. The 'drop down' is referred to as the 'negative polarity peak', and produces a small oscillation in the opposite direction to the plug firing voltage. This is due to the initial switching on of the coil's primary current. The voltage within the coil is only released at the correct point of ignition when the HT spark ignites the air/fuel mixture.

The plug firing voltage is the voltage required to jump the gap at the plug's electrode, commonly known as the 'plug kV'. In this example the plug kV is 13.5 kV.

Go to the drop-down menu bar at the lower left corner of the Waveform Library window and select COP (Coil on plug ignition) secondary voltage. 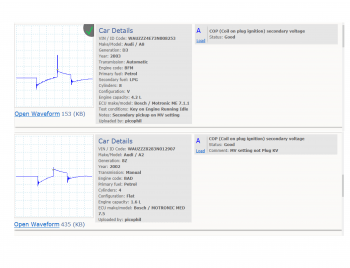 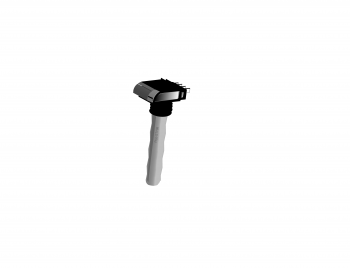 The operation of the coil on plug is essentially the same as any other ignition system. Each coil has a low primary resistance, and steps up the primary system voltage to as much as 40,000 volts to produce a spark at the plug.

Using individual coils for each spark plug also means the coils have more time between each firing. Increasing the "coil saturation" time (the time the voltage to the coil is on to build up its magnetic field) increases the coil output voltage at high rpm when misfire is most likely to occur.

Hello Steven, firstly thank’s for the feedback. From your description it sounds like the system you have falls between two different guided tests. I’m sure the info you require can be found in - Ignition - COP 4-wire trigger and feedback, and in - Ignition - COP secondary HT extension lead. Sounds like you don’t need the extension lead only the capacitive pick-up. (please read the safety warning). Waveforms for secondary and primary ignition should all be very similar, it’s only the switching/triggering that is different. you might like to log-in to our automotive forum, contact like minded tec’s. http://www.picoauto.com/support/

Working on a GM V8 pushrod engine 6.0 liter. This engine uses a four wire primary, one coil per cylinder with a short HT wire to the plug. Will a capacitive pick up at the plug wire give me a usable waveform?  I think that it will, but your automotive test guidance does not address this ignition setup . Are the actual waveforms themselves pretty much the same amongst the all the ignition systems?    Thanks for your help.