The purpose of the test is to check the excitation and position signals and circuits of an Electric Vehicle (EV) motor resolver. As the test involves multiple differential measurements across inductive circuits, it is only suitable for floating ground scopes (i.e. PicoScope Automotive 4x25 and 4x25A models only). 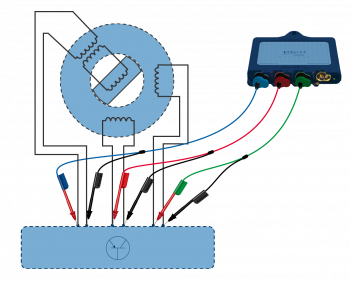 The resolver unit comprises a rotor winding circuit (in a dual winding arrangement), fixed to the motor rotor shaft, and three separate stator windings, consisting of an exciter winding and two output windings.

The two output windings are 90 degrees apart. Therefore, the induced current in one will vary according to the sine of the rotor angle, whereas in the other it will vary according to the cosine. Hence, when measured across an output winding, the output voltage will oscillate at the excitation frequency but with an amplitude modulated by either the sine or cosine of the rotor angle.

When carrying out motor resolver testing it is necessary to be aware of different possible internal combustion engine (if hybrid) and/or motor-generator configurations. The resolver may need the vehicle to be either driven, idling whilst stationary, or jacked up with the wheels turned manually to produce an output. The required method will depend on the vehicle and the diagnostic requirements. In all cases, you must strictly adhere to manufacturer operating procedures and safe working practices.

As motor resolver output voltage measurements are made across each output circuit, an oscilloscope with a floating input or differential probe must be used. Oscilloscopes having common ground inputs are unsuitable for making these differential measurements.

The motor resolver output voltages can be evaluated using PicoScope's Math channels feature, as shown in the above figure.

The relative angle of the rotor is given by the Math channel:

The associated Math channel signal in the graph view clearly shows how the rotor position varies.

The effect of the relative rotor position on the output voltage amplitudes of the induced output winding currents (i.e. the envelope) is given by the Math channels:

The associated Math channel signals in the graph view clearly show the modulation effect of the rotor position on the output voltage amplitudes.

Motor resolvers have no onboard electronic components and avoid direct electrical connections. Therefore, they are well suited to harsh environments, have no wires to limit rotation and no wearing brushes. However, they may be susceptible to the following faults: