The purpose of this test is to evaluate the in-cylinder pressures of a gasoline engine during a snap throttle test using the WPS500X pressure transducer. 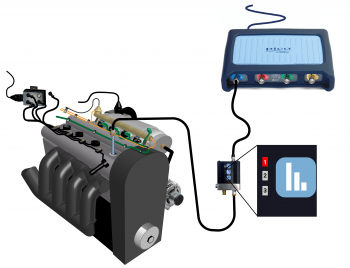 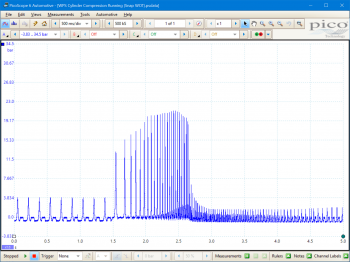 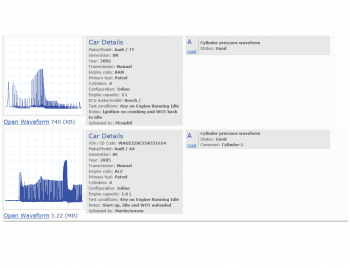 When used with a snap throttle test, a WPS500X allows you to observe how in-cylinder pressures change over a range of air flows in and out of the engine.

It is possible to use PicoScope’s Zoom, Rulers, and Rotation rulers to analyse and identify similar features in your waveforms to those described in the In-cylinder pressure during cranking (gasoline) and In-cylinder pressure during idle (gasoline) guided tests. However, the snap test waveform allows us to look at other broader trends that occur as the air flow and engine speed change.

When captured during a snap throttle test, the relationship between the in-cylinder pressure waveform features and engine events can be described in turn, as follows:

When two Rulers are placed on the time axis, the Frequency legend indicates the equivalent cycle frequency calculated from the time period (delta) between the rulers. The frequency is displayed in units of hertz and RPM. Therefore, if rulers are placed at two consecutive pulse peaks, which are separated by 720° of crankshaft rotation, the RPM value indicates half the average engine speed over the period.