The purpose of the test is to evaluate the charging split between the vehicle's Low Voltage (LV) auxiliary (12 V) and High Voltage (HV) battery systems when being charged by single-phase Mode 2 Electric Vehicle Supply Equipment (EVSE). 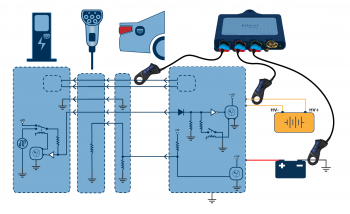 However, there is an additional side effect that an auxiliary battery fault can also cause HV battery charging problems. As such, it is critical that the auxiliary battery is of the correct type and specification for the vehicle and remains in good states of charge and health (see here for an example of what can happen in the opposite case).

A poor or failing auxiliary battery might be detected after the EVSE is connected to the vehicle, as it first delivers charge: An auxiliary battery with a high internal resistance will draw more charge, reducing the charge available to the HV battery. In this way, it is possible that a faulty auxiliary battery could cause a HV battery to never be fully or properly charged. The test described here shows how the charge from the EVSE is distributed between the LV and HV battery systems. As such, it is a good test to help identify whether one of these systems is causing a charging fault.

This test assumes that a single phase Mode 2 type charger is being used. However, it is possible to perform the test with 3 phase chargers: consult the vehicle manufacturer's data to identify a suitable input charging phase instead of the L1 or Neutral cable described above. Note that the test is also suitable for both Type 1 and Type 2 charging connectors.