The purpose of this test is to view and evaluate Controller Area Network (CAN) bus messages in their number, rather than their voltage, form. 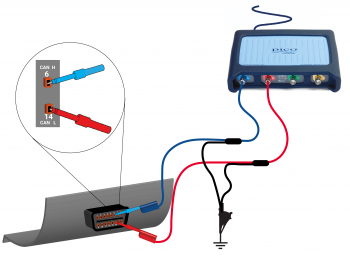 If waveforms do not appear on the screen, the DLC may not provide direct access to a CAN bus. Use manufacturer data to identify appropriate access at other locations.

If the Serial Decoding function does not decode your CAN bus data, check its speed and enter the correct Baud Rate in the tool’s Settings (with these signals the baud rate = the number of bits per second). 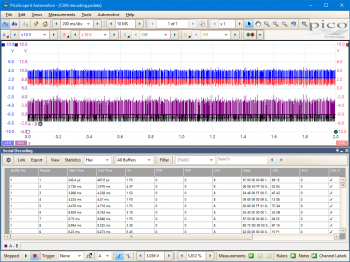 The CAN-L and CAN-H waveforms mirror each other about 2.5 V and have a 1 V peak to peak amplitude.

CAN-L and CAN-H remain at 2.5 V in the periods between messages.

The low and high voltages are relatively uniform without significant noise or distortion.

A third channel, A – B, shows the voltage difference between CAN-H and CAN-L and represents the bus’s logical state.

Many messages are captured across the screen (Buffer). Serial Decoding assigns each a row in the data table.

Each message’s identifier (ID), payload (Data), and related properties are displayed across the table’s columns.

Go to the drop-down menu bar at the lower left corner of the Waveform Library window and select CAN bus H or CAN bus L. 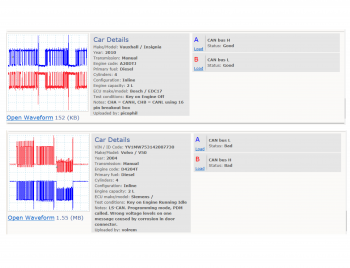 CAN messages are transmitted digitally as a series of low or high values within a fixed structure known as a frame. The smallest data unit within these binary encoded messages is a bit, logically representing either 0 or 1. A message identifier follows the start of the frame. The identifier assists message arbitration when two or more control units try to broadcast a message at the same time; the lower the identifier’s value, the higher the message’s priority. Various values, including the data payload, and a checksum follow the identifier.

The voltage difference between the CAN-L and CAN-H lines represents the bus’s logical state. Therefore, the lines are referenced to each other rather than to an external potential, such as the chassis ground. This differential arrangement improves noise rejection as interference affects the lines equally and their voltage difference is maintained. Typically, the lines are configured as twisted pairs to reduce interference effects.

High speed CAN buses use terminating resistors to remove transmission reflections within the bus; without the resistors, transmissions can bounce back from the end points and distort the messages. Typically, a 120 ohm resistor is used to connect the CAN-L and CAN-H lines within the two control units at each end of the bus. In this parallel configuration, the total resistance between the CAN-L and CAN-H lines is around 60 ohms. Therefore, measurement of this resistance will indicate the bus’s integrity. Resistance measurements must not be performed on buses without termination resistors, unless all the attached control units have been previously disconnected.