The alternator
by Pico Technology 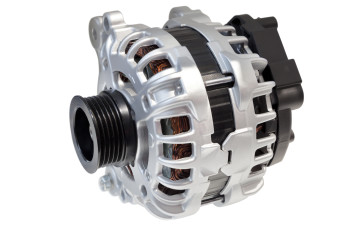 The alternator, as the name implies, produces an alternating current (AC) output, which is rectified to direct current (DC) to provide the correct type of voltage to replenish the battery, to keep it at full charge.

The field current, approximately six to eight amps, energizes the rotor which then induces an electric current in the stator as it rotates. The rating of the alternator tends to be vehicle-specific, as a base model has less electrical demand than a vehicle with typical top-of-the-range accessories, such as electric front and rear heated screens, heated mirrors, additional lighting, heated and electrical adjusted seats, etc.

The alternator stator has three internal windings wound 120 degrees between phases and it requires nine diodes in 'bridge' configuration to rectify the output. The voltage is controlled by a solid-state regulator that maintains the output in the range stated in the notes above. The output current is determined by the requirement at the time. For example, a battery that has just been subject to prolonged cranking draws a higher output from the alternator than when the battery is fully charged.

A good charging system has the following characteristics:
A fall in battery voltage should be accompanied by an increase in charging current and vice versa.

The regulated voltage can be measured with a multimeter, but this reading can appear correct even if the alternator has a diode fault that reduces the output by 33%. The only true way to monitor the alternator output is to observe the output voltage and current waveforms using an oscilloscope. 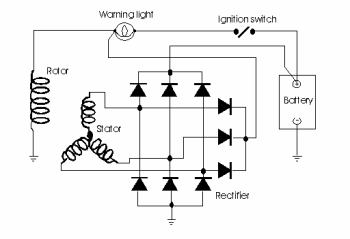 Some vehicle manufacturers may use a ‘smart’ alternator that varies the alternator voltage based on other conditions.

For example, Ford uses what is termed a 'smart charge' system. With a conventional charging system, the battery is charged at a voltage that is determined by the voltage regulator, with the entire electrical load being drawn from the alternator-fed battery.

The alternator has two connections to the Engine Management Module (ECM), to monitor and control the output. This monitoring also allows the Idle Speed Control Valve (ISCV) to be operated when high electrical demands are made when the engine is at idle. The ECM also controls the engine run relay, which only allows circuits with a high current demand to be activated when the alternator is charging. Until then, the components remain inactive.

The ECM is now responsible for switching off the dashboard-mounted 'charging light'. When starting the engine with a conventional alternator, the unit is activated as soon as the ignition is switched on, but a 'smart charging' system will only initiate the alternator once the engine has started. This action avoids an unnecessary waste of voltage on a vehicle with a discharged battery and also avoids the extra effort involved in cranking an engine with an operational alternator. 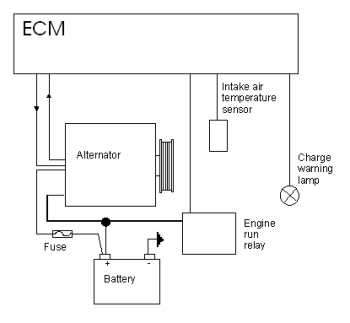