With reference to the following case study.

I thought it would be good to revisit the maths and modify the technique to calculate the theoretical MAF. Thanks to Andy Crook at GotBoost and the comments left at the end of the case study they are always appreciated.

Like with all measurements, accuracy is paramount and there will always be variables where maths is applied to raw data. Hopefully, the information below will help minimise inaccuracies attributed to how maths and filters are applied.

Here we have a 1.8-litre, 4-cylinder, normally aspirated Toyota Celica (engine code 2ZZ-GE).
Our capture focuses on the relationship between the crankshaft sensor, throttle position and MAF, from idle to WOT. 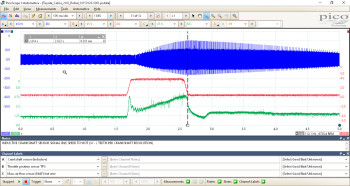 To accurately determine the maximum engine speed during the WOT event, I have zoomed in at the point of peak amplitude to measure one engine revolution with the time rulers.
Note: with an inductive style crankshaft sensor the amplitude increases in proportion to engine speed.

The math channel Crank(A, 36) is also included to graph the engine speed (topic11511.html). 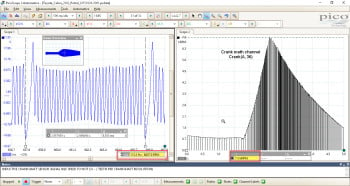 As we can see above, there is a discrepancy between the measured value at higher engine speeds when using the accurate time ruler method on the left (6807 rpm) and the crank math channel on the right (7000 rpm).

We also have the presence of those “nuisance spikes”, where the software detects the instantaneous dramatic increase in signal frequency, immediately after the missing teeth.
This has been documented and will be resolved given that the crank math channel should not draw data where the missing teeth pass the crankshaft sensor; instead, it should seamlessly display data as the remaining teeth continue "en route".

We can tackle the crank math channel concern (nuisance spikes) by using the filtering function of math channels.

The crank/rpm math channel would (as usual) utilise “frequency” and be re-written as LowPass(60/36*freq(A),8) to incorporate an aggressive lowpass filter of 8 Hz. 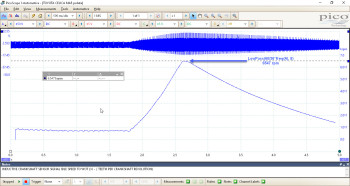 Above, we can clearly graph an overview of engine speed without the intrusion of nuisance spikes. 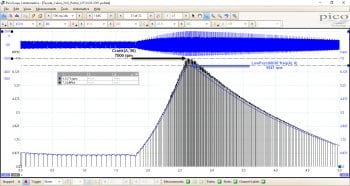 The LowPass(A, 8 ) section of our equation applies an 8 Hz lowpass filter to the rpm math channel, which has the benefit of removing the nuisance spikes (for ease of viewing) but at the expense of peak accuracy.

Our initial rpm measurement (using the time rulers), confirms our peak rpm to be 6807 rpm, whereby the blue lowpass math channel above indicates 6547 rpm, which is 260 rpm adrift.

If we are just after an indication of rpm activity this rpm math channel is fine, but if we want to calculate theoretical airflow we need an accurate peak rpm value where our math channel matches our measured value obtained using the time rulers.

We can achieve the correct peak rpm by amending the amount of lowpass filtering we include in the math channel.

Now we have an accurate math channel indicating the correct peak rpm, we can move onto our theoretical MAF calculation.

Calculating theoretical MAF values:
MAF = (RPM X ENG CAPACITY in LITRES) / (60 X 2 INTAKE STROKES PER REVOLUTION)
While there are several routes to arrive at the same MAF value, I will break it down as follows:
Using the process below, we can estimate MAF for a normally aspirated engine (assuming a WOT).

Example
Our normally aspirated Celica uses a 1.8 litre, 4-cylinder, 4-stroke engine.
Assume now this engine is running at 3000 rpm (WOT) the airflow consumed could be calculated as follows:

With that said, aerodynamic calculations are based upon air mass at sea level at 15 degrees centigrade being approx. 1.223kg/m3 or 1.223g/l.

Be aware that all the above assumes the volumetric efficiency (VE) of our engine to be 100 %, where in reality, we can pray for 90% at peak torque (a true reality check is more like 86 to 88 %). 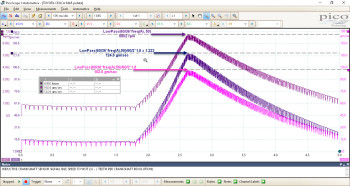 Above, we now graph the theoretical MAF across the entire rev range using both values for air mass (assuming 100 % VE). I guess the question now is which values are used for air mass by the vehicle manufacturer (1 gm/l or 1.223 gm/l) and what values are displayed on their data lists? Food for thought for sure.

VE calculations.
Calculating VE is challenging regardless of ability or formulas as the complexity surrounding manifold configurations, throttle positions, valve duration/lift and aerodynamics do not lend themselves to a simple formula.
However, as a baseline calculation of VE, we can use airflow figures.

We can never assume that an engine has a 100% VE, but if we calculate airflow assuming our engine has 100% VE using the airflow formula, then using a scan tool (gm/sec), we can obtain an approximation of the actual VE using the difference obtained from the scan tool compared to the value obtained via the scope formula. (This is assuming that the air mass meter is performing correctly, with no air leakage post-MAF meter and an engine with no performance issues.)

Interestingly enough, the throttle is closed at the peak rpm and MAF measurement points of the math channels! This may be due to a combination of how math channels are applied/calculated and how engine speed does not immediately fall at the instant of the closed throttle. Remember we are calculating peak MAF based on calculated rpm. 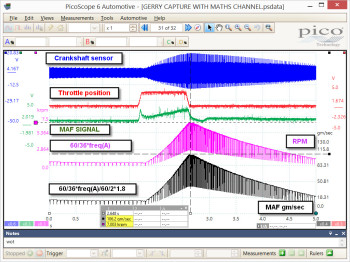 While this engine utilises VVT-iL “Variable Valve Timing and Lift” (valve lift increases at high rpm), it is certainly not over 100 % volumetrically efficient and does not suffer from external air leakage (post-MAF meter) to warrant such airflow.

The psdata file can be found below. You will need to download the latest PicoScope software to view the file.

I hope this helps and reveals the many challenges we face using these techniques. 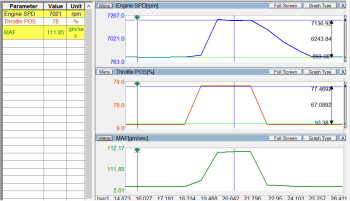