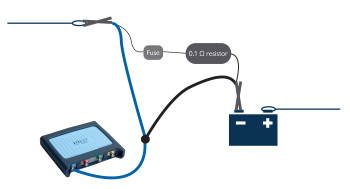 As in part 1, the math channel in this second part uses Ohm’s law: dividing voltage by resistance to obtain current. We will be looking at prolonged parasitic drain measurements through a 0.1 ohm resistor placed in series (via a fuse) with the battery negative lead and the battery negative post. 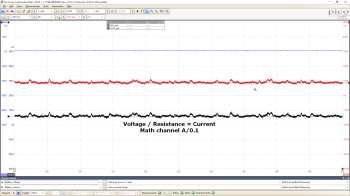 Be aware of any current flow through the 0.1 Ohm resistor in the case of a device waking up or activating during your measurement. Make sure that your resistor has a wattage rating that is sufficient to carry a specified amount of current to allow for events like these. A 0.1 ohm resistor rated at 50 watts should carry 4 amps comfortably if mounted in a heat sink: Watts = Volts *Amps 50 W/12.6 V = 3.96 A.

For parasitic drain of 4 A, a current clamp will be far superior. However, if the 4 A discharge only occurs after 12 hours, the resistor method is perfect. You can feel safe in the knowledge that it can carry 4 A comfortably. If all else fails, your inline fuse will act as a fail-safe.

Given the small voltage levels, filtering will be essential. Most certainly bandwidth limit (4225 and 4425) accompanied by lowpass filtering (1 kHz minimum). You can read more about filtering here.

The following is a great example of the resistor volt drop method capturing parasitic drain over long periods of time. The math channel confirms that there is a component that wakes up every 15 minutes for approximately 2 minutes and 16 seconds. The total test time was 13 hours and 16 seconds, with no need to worry about battery failure on the current clamp or thermal drift. 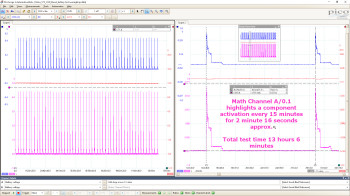 For increased accuracy, you could modify the math channel to allow for resistance of the inline fuse too.

What would happen IF I didn’t use this resister???

Shouldn’t the unit for channel /red trace be milliohms instead of miliamps?

Shouldn’t the unit for the red trace be ohms (or milliohms) instead of miliamps?

I think you need to see clearly the picture above.