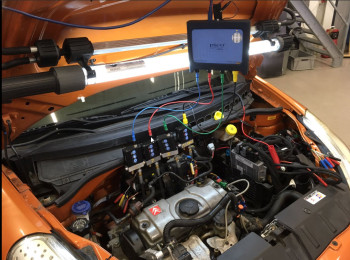 Every day is an opportunity to learn something new, as Steve Smith proved recently. He was at the AMT Automotive Boot Camp held in Holland to deliver a 45-minute presentation to 10 groups over 1.5 days, a place for like-minded technicians hungry for something new.

His presentation focused on WPS500X in-cylinder measurements from a petrol engine where the valve timing could be manually adjusted. This is a great way to demonstrate the diagnostic capability of the WPS500X pressure transducer.

The engine they used was the PSA “TU” 1400 cc unit, with the valve clearances adjusted as follows:

The colours of the channels were changed to make them clearer when they are overlaid for comparison.

The captures were taken simultaneously with four pressure transducers and the intake partially restricted in order to produce a well-defined intake pocket (to help identify the exhaust valve closure and intake valve open points).

The .psdata file below has the waveforms captured from the vehicle above during cranking. Steve used the Reference Waveform and Delay features in PicoScope to align the waveforms to make it possible to do like for like comparisons. You can find more information about these features on pages 30 and 132 in the User’s Guide.

In the following screenshot, the reference waveforms are aligned together. 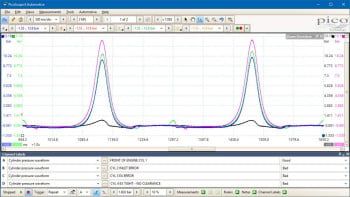 You should be able to see how the activity midway between the compression peaks (valve overlap) has changed for each waveform.

The blue waveform is taken from Cylinder 1 with no valve clearance issue, forming the benchmark for all cylinders in the comparison. We are often asked “What should a good one look like?” and often have no answer as there simply is no technical data. In cases like these, we can refer to the Waveform Library or an available vehicle with a known good cylinder. It is rare to have 3 cylinders with different valve timing errors and hopefully one cylinder will be performing correctly. 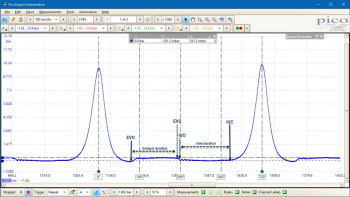 It is interesting that there does not appear to be any valve overlaps around 360 degrees as the pressure waveform falls to negative prior to 360 degrees, suggesting the exhaust valve is closed and the inlet open. 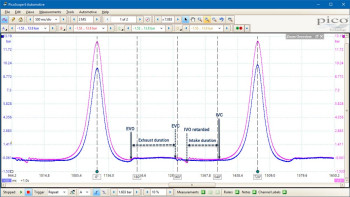 Looking at Cylinder 2, what stands out is the retardation of the inlet valve open event (IVO), given the deep negative pressure that formed in the cylinder between 360 and 540 degrees. The inlet valve close event (IVC) was advanced (the compression started to rise far sooner than Cylinder 1, shortly after 540 degrees) and the valve duration was shortened.

The point to note here is that excessive valve clearances result in a retarded opening event and an advanced close event.

The Boot Camp crew asked the following question: “How can you determine the difference between excessive valve clearance and a shifted camshaft lobe?”

By discussing it they agreed on the following answer: The valve timing will change for the valve in question (inlet or exhaust) but the duration will remain the same (unlike excessive valve clearance).

The second question was “Why is the compression higher on Cylinder 2 with excessive valve clearance?”

At first Steve thought that the compressions may have been uneven before the adjustments but one of the delegates pointed out that the compression stroke had increased due to the early closure of the inlet valve. He went on to discuss how this was a technique they used during the winter months with fixed duty diesel engines, where the compression is raised to assist with cold starting.

Notice also how the expansion pocket negative pressure between 0 and 180 degrees is greater for Cylinder 1 due to the fact the peak pressure at 0 degrees is lower.

The expansion pocket is formed as the piston descends the cylinder during the expansion stroke while the inlet and exhaust valves remain closed. As it started from a lower peak pressure (Cylinder 1) it is no surprise that the negative pressure is greater.

This may be fine for fixed duty engines and for this engine during cranking, but may introduce combustion anomalies at higher engine rpm and load.

“We live and learn together” 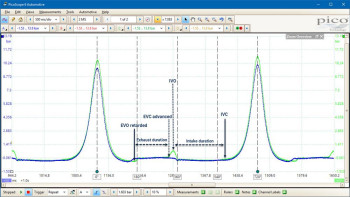 Cylinder 3 is the reverse of cylinder 2. The exhaust valve opening event is retarded and the close event advanced. This can be seen by the positive pressure formed between 180 and 360 degrees. This pressure drops immediately, prior to 360 degrees, when the intake valve opens. Notice how the intake and compression events are identical between Cylinder 1 and Cylinder 3 as the intake valve clearances are the same. 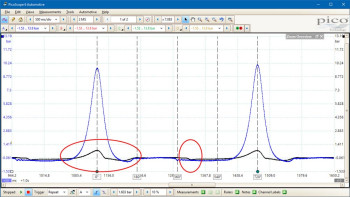 You may not need a pressure transducer in the scenario for Cylinder 4, as low compression is conclusive regardless of using a transducer or compression gauge (unlike the other cylinders). Any feedback here would be most welcome as to whether we could identify which is our offending valve (we know the exhaust valve is held open with this cylinder).

Steve has highlighted his concerns, which are non-uniform compression towers, a reduced expansion pocket, and what looks to be a retarded opening of the intake valve between 360 and 540 degrees

Moving onto the final demonstration relevant to cylinder leakage.

With four transducers connected to four cylinders, an opportunity arose to introduce compressed air into a cylinder with closed inlet and exhaust valves. 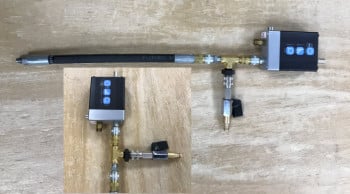 By rotating the engine by hand and monitoring the cylinder pressures on a slow time frame reveals which cylinder to leak test: 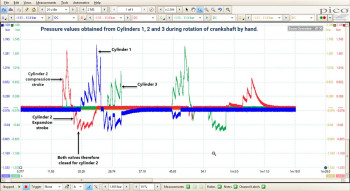 By locking the engine in this you can pressurize Cylinder 2. 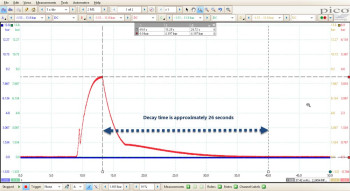 Given there were no compression issues with this engine we must assume this is a typical value. Once again, there may not be a lot of “decay time” data like this out there, so we have no other cases to compare with. The Waveform Library could be a huge resource is we adopt such a technique.

If this was a faulty cylinder, the decay time would decrease accompanied with an air leak into the crankcase, exhaust, intake or an adjacent cylinder. Another WPS located in any of these locations would provide evidence of the source of the leak.

The vehicle that was used during this test had a MAP sensor. With the ignition on and the intake manifold blocked it was possible to monitor MAP sensor voltage for any fluctuation in proportion to the cylinder leakage (if the intake valve was the offending component).

All in all, there are a number of things that can be discussed as to the accuracy of valve open and close events, but comparisons with non-offending cylinders is key to reveal anomalies.

We hope this helps to reveal the possibilities of detection when it comes to shifted camshaft lobes, lifted camshaft, worn followers or poor depleted valve seats.

Here are some typical values for valve open events for engines with fixed valve timing:

A lot to read, digest and discuss.

If you want to read more, there are two a great forum posts. One called “The search for overlap” that digs deep into valve event approximation, and the original forum post of this article which has caused much discussion, "Individual cylinder valve timing errors".

This is a wrong sentence:
“It is interesting that there does not appear to be any valve overlaps around 360 degrees as the pressure waveform falls to negative prior to 360 degrees, suggesting the exhaust valve is closed and the inlet open.”
In fact, the valves are overlapped and is the reason for that the pressure is falling BTDC. Using your .psdata I can estimate that the IVO is at 349 degrees and the EVC is at 366.5 degrees.

Also is a good habit to ask Google before…

thank you for sharing knowledge, rich material.
could you please describe these values?
I didn’t understand the acronyms.