I will try to cut a long story very short:
A BMW 114i (N13) suffered a vacuum pump seizure due to oil starvation. This resulted in the locking of the exhaust camshaft that consequently spun the exhaust Vanos unit until the securing bolt sheared. And the rest, as they say, is history.

Post engine repair, I saw a great opportunity to measure the control signals to the Valvetronic unit (responsible for adjusting the inlet valve lift) which utilizes a 3-phase DC brushless motor.

It is worth mentioning here that Valvetronic (VT) is predominantly about reducing fuel consumption, and it includes many beneficial side effects such as improved engine efficiency with a reduction in exhaust emissions. VT operation allows the throttle plate to remain in a fixed position under a variety of engine operating conditions where the air intake is controlled by varying intake valve lift!

With the VT actuator disconnected, the engine can run as normal utilizing the throttle plate for conventional air intake control with a fixed valve lift (set to maximum). 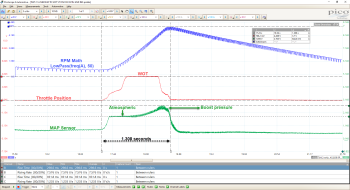 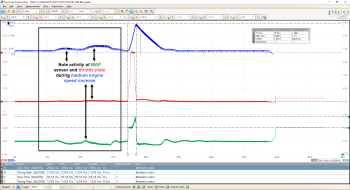 Moving now to a WOT test with the VT connected and active.

The additional channels at the bottom of this capture are connected to the VT motor, which I will go through later. Notice the completely different signature from the MAP sensor during the WOT event, given there is very little change in manifold pressure until approximately 26.03 seconds where the throttle has reached its maximum position at 4.47 V. Here, we use a combination of varying valve lift and throttle plate control. (N.B. Max power demanded by the driver will result in WOT regardless of whether the VT system is active or inactive)

Below is an overview of the engine speed, throttle plate position and MAP sensor activity during the engine speed increase from idle to medium speed, then WOT (with VT operation). Focusing on the MAP sensor, from idle through to medium engine speed, we have minimal fluctuations compared to image 2 above (VT inactive). This is thanks to a combination of throttle plate control and variable intake valve lift. This capture can be used as evidence that the VT system is active. 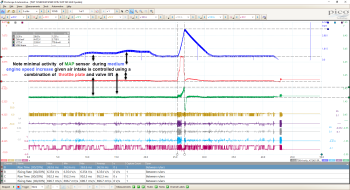 Let us concentrate on MAP sensor voltage. There is virtually no change in manifold pressure until we go to WOT. The voltage here is fixed at 1.775 V, regardless of engine speed, which is quite impressive when you think that the MAP sensor reads 1.859 V at atmospheric pressure with the ignition on and the engine off. The manifold pressure is held purposely below atmospheric pressure to enable purging of the fuel tank via the EVAP system. I have also included a number of measurements that highlight throttle position and MAP sensor rise time/rise rates to bring home how the different air intake control strategies influence these values.

I turned to the Valvetronic motor control. Below I have included the channel labels to assist with identification of each channel. 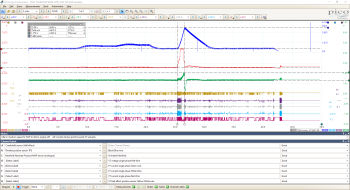 Here I focused on MAP sensor activity with the VT active during the transition from WOT to overrun. I chose this area of the waveform rather than idle to WOT due to the noise present on all waveforms thanks to ignition/injection and 3-phase activity.

Note the current flow through each phase of the VT actuator, accompanied by one of the five Hall effect position sensors confirming the rotor's activity/motion. 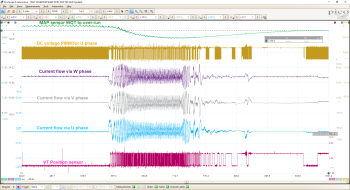 To assess the electrical integrity of the VT actuator, we can compare the phase currents for repeatability, uniformity and peak-to-peak values. These should theoretically be near equal. Below we have some variance in the peak-to-peak value of channel G (“U” Phase). As the vehicle has no running errors, I may revisit this value to check for a possible measurement error such as current clamp drift. 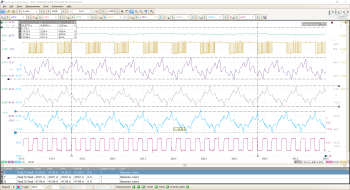 Note below how the three phases align perfectly with each current peak (120° apart using the rotation rulers to denote 0-360° then partitioned by three to reveal the three phases). I know that as the years go by this measurement will become more frequent than 0-720° partitioned by four. Take a look at the “U” phase voltage fixed at approximately 14.58 V (CH D) and how the “U” phase current increases in proportion (CH G), both highlighted in yellow. 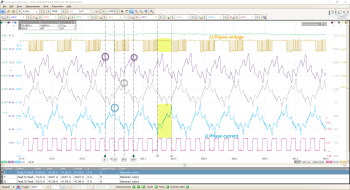 Finally, to add a clearer view of events we can use maths and filtering to bring about clarity. 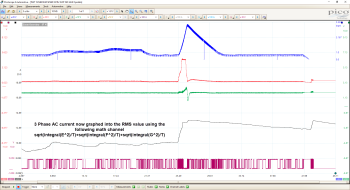 To graph the RMS of the VT actuator's 3-phase current, please see the “Maths is cool" forum post here.

I will try to add more on those VT Actuator position sensors ASAP. 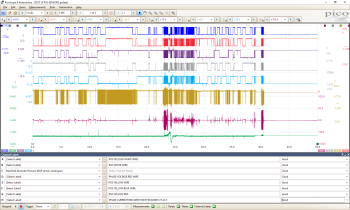 Below, we have zoomed in at the point of WOT followed by releasing the gas pedal (MAP sensor CH C starts to fall towards the end of the capture). 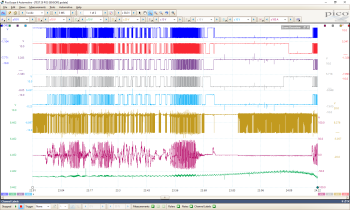 The final capture below looks at all 3-phase voltages during the shutdown (the passive discharge period).
We had previously looked at phase current (images 6 and 7 above) in order to evaluate the electrical integrity of the VT actuator. Comparing phase current for repeatability, uniformity and peak-to-peak values, which should theoretically be near equal (here each phase is under load).

Monitoring the 3-phase voltages at the point of “vehicle power down” allows us to record the voltage decay during the passive discharge phase. Once again, this should be near equal without “drop out” across the expected decay time. This delay time is not specified, and so we refer to the capture below at approximately 26 seconds as a typical example (each phase is without load). 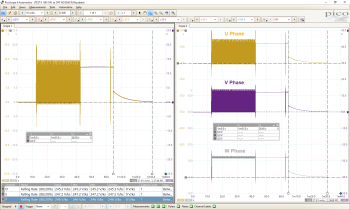 It would be nice if all these screen shots were saved/downloadable PICO files. Good Stuff!