Following on from part 1, and after navigating the potential differences between different scan tools, we ended up with two fault codes we could take direction from. They pointed to the boost pressure issues between the low-pressure turbo and the MAP sensor. Further investigation led us to the connectors for the low-pressure sensor and the downstream air filter pressure sensor. After swapping the two connectors the captured signals were correct, that fault codes were cleared and the vehicle’s performance was noticeably improved.

However, during the road test to confirm the fix, we began having problems again. When pulling away from a junction, the warning lights came back on and we had a dramatic loss of power. The battery power gauge was also stuck at MAX.

Looking at the fault codes again we now had a new one: U0129:00 Communication with Regenerative Braking System (RBS) control module is faulty. This sent us off on another wild chase looking at a potential CAN fault, but we knew that the Regen was working fine when both driving the vehicle with the engine and the electric motor. We spent a bit of time checking the CAN network but everything looked good at each step. Not wanting to ignore the fault code, as it had been set for a reason, we looked at the situation when the warning lights came on.

We knew that when driving the vehicle on the engine with the electric motor assisting, it drives fine with no warning lights and plenty of performance. We could prevent the vehicle from entering electric mode by selecting ‘S’ mode and sometimes it’s worth remembering that different modes will affect the vehicle's drivability, especially hybrids. This can be very useful when detecting these types of faults, as we found out. When selecting Eco mode, the engine would shut off and the car will select the appropriate power source and can be driven on electric only. However, there are limitations to how much driving power the electric motor can provide the vehicle. For many hybrids, it is limited to vehicle speed and input demand and as soon as either reaches a set limit, the engine will be restarted to provide the driving power and the motor is there to assist in order to meet driver demands. What we quickly started to realise was that the fault was being set every time the vehicle tried to restart the engine after having been in electric mode. To capture what was going on we decided to connect PicoScope to the crankshaft, gas pedal position sensor and HV current used to drive the vehicle. 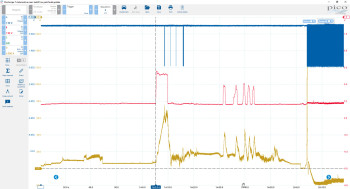 As you can see when we put our gas pedal down for a WOT response, this would have been the moment the engine restarted in order to meet the driver request but there is limited movement in the crankshaft. It almost looks like an attempt has been made to turn the engine but it has not been successful. At this same moment, the warning lights were on and we had a loss of power before having to stop and restart the engine.

Time for some background work on how the system is supposed to operate! When the engine was started up from being switched off, using the ignition key, we could see that it was the job of the electric motor to start the engine. This means that the typical cranking of a diesel engine using a 12 V starter motor doesn’t exist, with start-up being extremely fast and with considerably less noise. Once the engine was running, the motor was still connected to the crankshaft allowing the engine to recharge the HV battery as you can see in the capture above. For this vehicle to drive on electric-only power, a wet clutch is used to separate the connection between the motor and the crankshaft, which allows the motor to independently drive the conventional automatic gearbox.

We later found out that if the engine failed to restart using the 12 V starter motor, the wet clutch would attempt to engage the gearbox and electric motor with the engine in order to ‘bump’ start the engine. This only occurs in certain conditions and results in an exceptionally harsh jolt through the vehicle, but it explained the slight movement in the crankshaft in the above capture. Knowing what was supposed to happen gave us yet more direction. The scan tool had an active test which allows the technician to set the vehicle to perform a relative compression test. This forced the engine to use only the 12 V starter motor to perform the test.

Not wanting to miss anything here, it was time to bring out the 8-channel PicoScope. In this situation, eight channels allowed us to see how the system interacted, much like how we used the 8+channel scope to see the operation of the rear steering control on a DAF Lorry as described here. 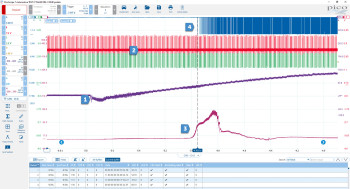 Here we could see that as the relative compression active test was activated there were some changes in the 12 V current but there was no movement in the crankshaft signal. After a period of time, current was then pulled from the HV battery, which in turn started the engine as we have activity from the crankshaft sensor. We have included CAN here, as the fault code was pointing to a loss of communication when the engine was attempting to restart using the 12 V starter motor. Looking back through the decoded data we could see no disruption or corrupted packets during this moment so it was time to look more closely at the 12 V starter motor circuit and operation.

The starter operation used a starter relay much like all conventional vehicles. A signal was sent to ground pin 85 at the relay, which in turn created voltage differential between pin 85 and pin 86 that allowed the current to flow. This current then creates the magnetic field in the coil that pulls the contactors together. The contactors were connected to pins 87 and 30 where 87 was a constant power supply and 30 was connected to the solenoid at the starter motor. When there was a demand for the engine to be restarted we should see this change in pin 85 and 86 to switch the solenoid to engage the starter motor. Using the 8-channel scope, we also decided to capture the three phases on the motor to see when the demand from the motor needed the assistance from the engine. 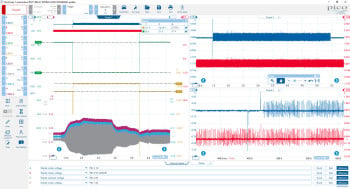 In the above capture, we can see that as the load increased on the motor there was a change in the voltage differential of pin 85 and 86. Although there was voltage present at both sides of these terminals, they are of equal voltage meaning no current can flow. As this potential difference changes, we can then expect current to flow. This is highlighted in pin 30 and 87, Channel A and B respectively, as during operation there appeared to be noise on pin 87 while pin 30 was very clean. As the relay was energised, this ‘noise’ transferred to Channel A and disappeared when the relay was de-energised. Looking closer at the two signals during the operation we could see that the noise was identical, implying that the contactors were closed and made a connection. Sometimes noise can be useful!

Looking at terminal 87 we also saw that there was no voltage present. In all situations with the ignition on, there should be a voltage from the 12 V system to supply the starter solenoid when the relay is energised. This was traced back to a blown fuse which would also make sense as to why the 12 V starter motor wasn’t engaging.

After replacing the fuse, we decided to jump the relay to see if we could detect any activity in the starter motor. We bypassed the relay with a jumper wire and added a current clamp to observe the flow when we supplied the starter motor solenoid with power. 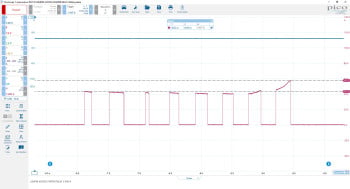 In the above capture, we have the output from the crankshaft sensor and the current flowing from pin 87 to pin 30. As you can see there was no movement in the crankshaft, yet there was a lot of current flowing. In this case up to 50 A, which would definitely blow the fuse. The lack of any sound from the solenoid also backed up the capture and resulted in the next part of the diagnosis. We needed to get access to the starter motor and check the wiring between pin 30 at the relay and the solenoid at the starter motor. It could be that the starter motor had failed and shorted internally to ground resulting in the current draw, or the wire could be trapped or shorted to the engine block. All of this would need intrusive steps to get access and as the vehicle needed to go back, we instructed the technicians with our findings.

We have now heard that the starter motor was removed and bench tested and failed to operate indicating it had indeed failed. The control wire from the relay to the starter motor was also tested for shorts to ground, with no issues detected. A new starter motor was ordered and fitted and I've had a confirmation video sent to me showing that when the vehicle is being driven in electric mode and pulling away from a junction, the starter motor can be heard to engage and start the engine. There are no more warnings on the dashboard and it appears that full vehicle functionality has been restored.

This was a case full of twists and turns and it was a real challenge. A lack of product knowledge, inconsistent scan tools reporting different faults and sensors with the same plug next to each other are all issues we face when a problem car enters the workshop. Understanding how things work has never been more important and I have to thank a number of people here who have helped guide and teach me with the operation of this vehicle. Peter Melville of HEVRA who, with his knowledge on all things high voltage, hybrid and electric, is a fountain of information and always willing to help, Ashley Giles who had an overwhelming amount of product knowledge and made sure that I understood what was supposed to happen, Saqib Nazir for the opportunity to work on this vehicle and for sending me the confirmation, and of course Steve Smith for coming along for the journey! Let me share one last picture to show the joys of working with eight channels: 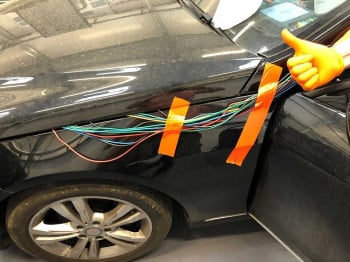 Thanks for sharing this case study. Very interesting and almost thrilling 😊