The vehicle, a 1991 Opel Kadett 1.6S saloon, had developed a very loud screeching noise, which sounded like a cross between a squealing drive belt and a loose stack of rapidly vibrating metallic plates. The car was powered by the original GM 16SV OHC transverse-mounted petrol engine and the THM125 automatic transmission and had covered a genuine 52k miles from new.

The screeching noise was both when the car was stationary and moving. It was present on acceleration, deceleration, at a steady speed or at idle, irrespective of load, in gear or in Neutral/Park.

The noise only depended on engine RPM, and, as soon as the critical engine speed had been passed, it disappeared. For this reason, it was referred to as a resonant screech.

In all other respects, the transmission behaved perfectly.

A Pico NVH 3-axis pick-up indicated that the noise originated inside the automatic transmission at a position close to the governor housing.

An initial investigation using a Pico NVH kit showed that the dominant audio frequencies of the screech were around 2700 Hz, and a 3-axis accelerometer, mounted on a cylinder head bolt and set up to measure vibration fore-and-aft, showed accelerations of well over 0.5g and sometimes up to 1g at engine speeds near the resonant RPM (which seemed to vary slightly but was around 1000 RPM). 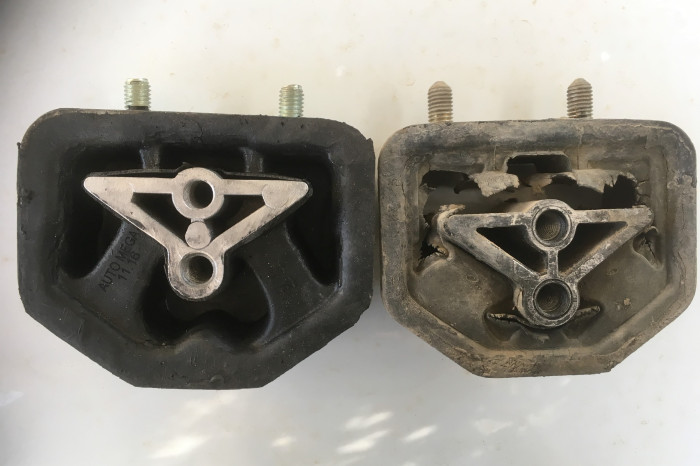 These excessive accelerations pointed to a solution that lay in a set of new engine mountings rather than a trip to an automatic transmission specialist.

Nevertheless, to begin with, I added a Wynns transmission flush product to the transmission fluid and ran the car for 10 minutes. I drained the transmission fluid. The sump refilled with ACDelco ATF Type III (Dexron), and I directed the outlet pipe from the oil cooler into a bucket to make sure that all the old fluid was expelled. The sump was refilled a further two times and the engine ran in Neutral. This had no effect on the screech (the transmission fluid in the sump had been replaced twice previously over the years but never totally renewed). The addition of a bottle of Gunk Trans Medic (a highly rated US product that makes no claims about swelling the oil seals) did not help either, although the gear shifts felt smoother after these treatments.

The first step was to take a series of NVH measurements before replacing the mountings so that I could make an objective assessment. I collected one set of data by placing the NVH pickup on the engine as well as the transmission, and a further set of data by moving the 3-axis accelerometer inside the car to the driver’s seat rail so that an assessment could be made of any improvements of NVH inside the passenger compartment.

The first mounting I replaced was the right-hand one, which was closest to the centre of gravity of the powertrain. A visual comparison of the old mounting and the new one left no doubt about the need for replacement.

This mounting took longer to replace than expected, so the replacement of the other two mountings was delayed by a couple of days. In the meantime, the car was driven, and, disappointingly, the screech was still present. The other two mountings, the left-hand one and the one behind the gearbox, appeared to be in a far better state than the right-hand mounting. In fact, a visual inspection alone would have suggested those two mountings did not need replacing. However, after all three had been replaced, there was no doubt that the car was much quieter and far smoother at idle.

The NVH tests were repeated as far as possible, at the same RPMs and after the 3-axis accelerometer had been recalibrated, to ensure fair before and after comparisons. By using the reference waveform feature in the Pico software, the initial set of frequency-domain curves (with the original mountings) are shown together with similar data taken after the mountings were replaced, making it easy to compare.

The NVH data measuring fore and aft acceleration at a front cylinder-head bolt shows the peak of the second-order vibration was significantly reduced by the new mountings.

And in the time domain, the accelerations similarly showed a reduction. 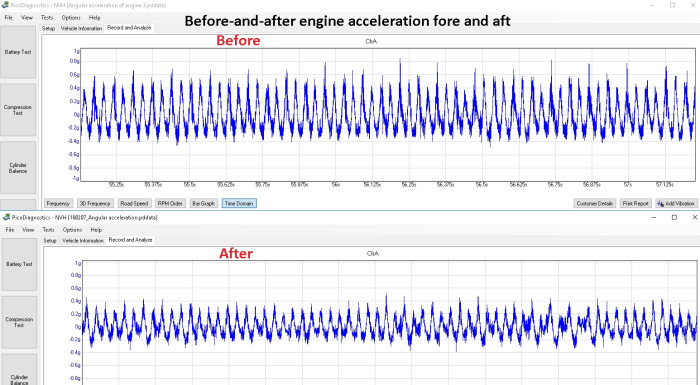 When the 3-axis pick-up was placed on the kick down lever on the transmission, the frequency-domain plots show an interesting characteristic not seen in data captured at the cylinder-head bolt: strong vibrations across a continuous and wide band of frequencies from 120Hz to 200Hz; significantly, these vibrations are virtually absent after replacing the mountings.

The accelerations in the time domain measured at the kick down lever similarly show a significant reduction in the vibration of the transmission. 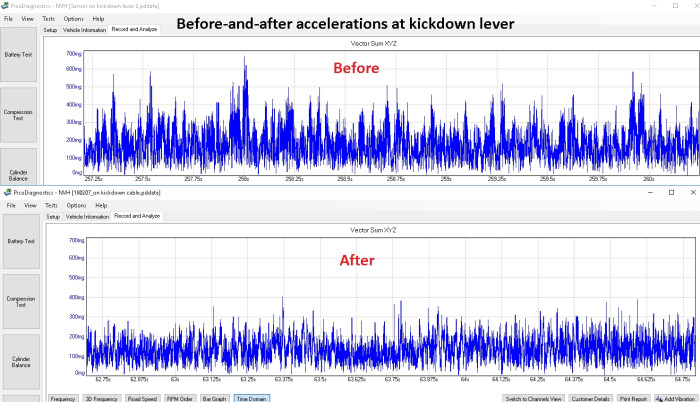 The reduction in vibration on the powertrain units is due to the improved vibrational damping of the new mountings. Even more dramatic is the improvement in vibration isolation, which shows in the NVH data taken inside the passenger compartment.

And the vibrations as measured in the time domain inside the passenger compartment are a mere fraction of what they were, proving that the sensation of a smoother, quieter car was more than plain wishful thinking. 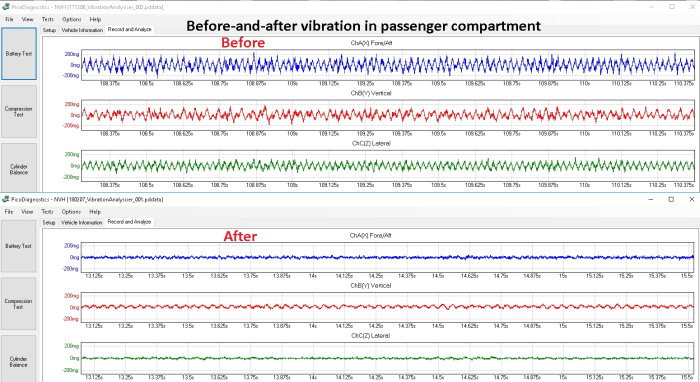 Objective NVH measurement aside, the real test came with driving the vehicle over the following weeks, which left no doubt that the resonant screech had been eliminated. The Pico NVH kit along with the PicoDiagnostic NVH software played a central role in identifying the cause of the problem and the correct solution; furthermore, the NVH data taken post-replacement will allow an objective assessment to be made of the state of the mountings in the future, because, as this exercise has clearly shown, unless the mounting has collapsed, no credence can be given to visual inspections of engine mountings.

Thank you, Dave, that’s much appreciated.    I haven’t used my kit much - just the Opel and a Rover 100, also before and after changing its engine mountings.  With neither being OBDII cars, I used a current clamp around the LT side of the coil to get my RPM signal for Channel D, but there were a couple of times I’d wished Channel D had been free for a mic.  With OBDII you have the advantage of being able to put a Mongoose lead into a usb slot for the RPM signal and that leaves Channel D free for other use.  I also break out the NVH kit every so often just to retain familiarity with it to avoid slipping back down the learning curve or becoming hesitant to use it because it’s no longer second nature     It’s now several months on and the Opel is still as good as new.

Excellent piece of work. Well presented, too. Will be useful to those still unfamiliar with NVH testing and the numerous benefits which accompany such tests.