I take no credit from the following post as it is from one of our users on our Facebook Automotive Group. Edward Boers was kind enough to share his experience of working on a Pierce Aerial Ladder. Should you not know what this is please look it up! Thanks Edward for allowing me to post here as it's great to see Pico being used in application that may not be obvious! 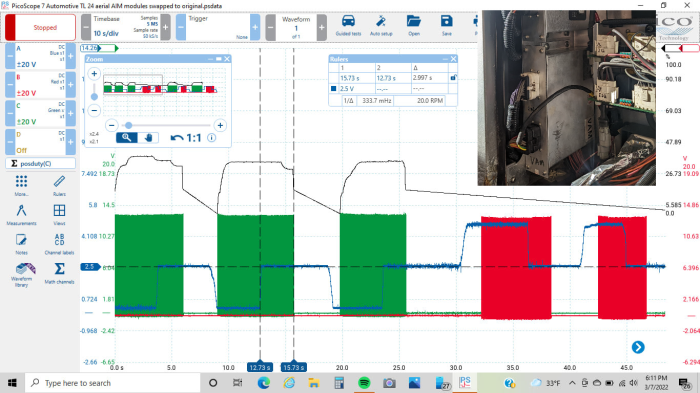 Just wanted to share a screen capture of a Picoscope being used to diagnose an issue not of a traditional automotive application.

I am a EVT technician and our city owns nearly 200 fire apparatus and approximately 120 ambulances.

This screen capture was for the purpose of diagnosing a Pierce Aerial ladder which had complaint of the ladder would continue to either both raise and lower for a period of time after the operator would move the control lever to its neutral position.

The green markings on the screen are the pulse width modulated output from what is known as an AIM (aerial interface module) module to move a solenoid operated directional control valve to raise the ladder and the red would be the same except to lower the ladder.

I added a math channel which is the black trace so that one could see the duty cycle on the raise pulse width modulation function coming out of the AIM module.

What was initially challenging was to determine if the problem was an electrical issue or a hydraulic issue. One could clearly see that after the control lever is moved from the raised position or the lower position and moved back to the neutral position the module could take up to 3 seconds to bring the pulse modulation back to zero and stop the hydraulic control of the ladder.

I didn't have the forethought to take another capture but this pulse width modulated signal leaves the AIM module and then enters a digital to analog converter and then it moves on to a programmable end of line device which will also ramp up or slow down the control of the hydraulics to make sure they are soft movements that don't throw fireman off of the ladder if it were to stop moving suddenly.

Having the scope hooked up showed that the AIM module was the culprit and powers and grounds checked out on it just fine. The module was replaced and it's been in service for an entire year with no issues."

Thanks again Edward and look forward to seeing more.