Komatsu 138US | Engine hunting under load

You’d have thought that when faced with construction equipment, the smaller the engine the easier it would be to work on. That couldn’t be further from the truth! A smaller machine typically means it’s more difficult to work on. This little 14T Komatsu was no exception as we were to discover.

I was asked to take a look at this 2016 Komatsu 138US. The customer complaint was that when loading the hydraulics, the engine would ‘hunt’ and black smoke was emitted from the exhaust. As with all diagnostic challenges, the customer interview was vital to ensure that the fault could be replicated along with anything other relevant information, such as whether it was refuelled recently.

When speaking to the operator we learned that the machine was worse when hot, it had no warnings on the display and that the fault occurred without warning. Fortunately for us, the machine had not been started yet that day which allowed us to go through the warmup stage to verify that the issue was indeed worse once it was hot. More often than not, when faced with potential temperature-related issues, you don’t have the luxury of testing through all operating temperatures!

We did a quick fluid and visual check around the engine bay to confirm that there was no obvious fault. But, as mentioned earlier, the smaller machines have everything crammed into a very small space and when you can’t even see the injection pump and pipe you know you’re going home with red and sore arms! 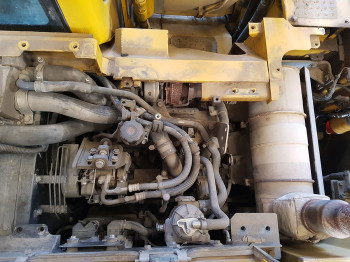 There was no apparent issue with starting the machine and there was no adverse noises or smoke. For this reason, we omitted to do a relative compression test. By working the machine while it was still warming up, we could get an idea of the customer’s complaint. By holding the boom service all the way up and then keeping the lever in this position, we could ensure that the hydraulic pump is requesting the maximum torque from the engine. In doing so we’re putting load on the engine. While the engine was still cold, the fault was definitely not obvious. We noted that there was a small drop in engine speed but the customer’s complaint of hunting and black smoke was not apparent. After bringing the machine up to temperature we observed some serial data made available to us from the display in the cab. Komatsu has a great resource built into their machines that allows technicians to view certain serial data without the need for a scan tool. By accessing the service menu, we could now view data such as targeted and actual EGR position, MAF, target and actual rail pressure, as well as hydraulic fluid pressures, which meant that we could start building an action plan.

To get a little more direction, we observed the hydraulic pressures on the display to see if we needed to focus on the hydraulic system or the engine. A hydraulic system that is overloading the engine will have a similar effect as seen by the customer. This can often be seen where relief valves have been set too high, creating more pressure in the machine to give more digging and lifting force. I would certainly never recommend this, as it would cause more problems than it would solve, but being able to determine pressure can give you some direction. By using the monitor, we could see that the pressures were correct for the machine, under load around 340 bar.

Being happy that things appeared OK on the hydraulic side, we moved hydraulics down on our action list. As the engine continued to warm up, the fault started to become apparent. While maintaining the load from the hydraulic system, the engine started to hunt and as the RPM dropped the black smoke appeared. Black smoke is caused by poor combustion which can be down to a number of factors with air, fuel and compression being the biggest contributors. We had our first three items on the action list.

Compression-wise the machine started up on the button and with no misfire, even when the fault was occurring, so we moved this down on our list and focused on air and fuel. With construction equipment, the most common problems are usually related to fuel, so it was important to get the rail pressure. I always try to capture the engine speed whenever possible, as being able to graph the crankshaft acceleration and deceleration during the 4-stroke cycle has massive diagnostic benefits. A cylinder ID usually completes this first capture setup, but it was not easily possible due to the design of the engine. It would have required more intrusive work, so we settled on capturing the exhaust pulse as we appeared to be dealing with poor combustion.

Problem no.1 – the rail pressure sensor location. As mentioned earlier, in the smaller machines it is a lot more difficult to access components. Some of the bigger machines have letterbox style cutouts on the ballast weight on the back of the machine, but we had no such luck on this little Komatsu. Below you can see the fuel rail pressure sensor, which was buried underneath the intake manifold! 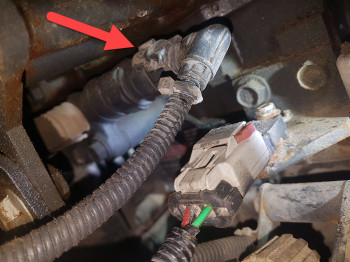 A lot of off-highway machinery also include protective covers around the connectors which make access that bit more difficult.
Problem no.2 – engine speed. The crankshaft sensor was in an equally difficult position and involved us removing the cover from underneath the machine. Making any connections would have meant running a test lead through the belts, which is something I wasn’t prepared to do. Fortunately, the teeth for the crankshaft sensor were on the pulley itself so all I needed to do was create an inductive sensor and I should get a signal.

Bring in the Keyless Entry detector, TA330, and a magnet. This is not an ideal solution by any stretch of the imagination, and I’ve not worked out the limits of the TA330. By attaching a magnet to the outer body and then positioning it to the toothed area of the crankshaft pulley I managed to get the following capture. 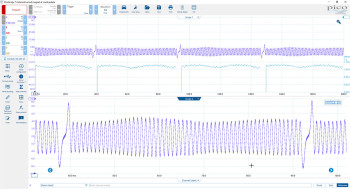 Not bad considering that it’s created from bits I had in the kit! The crank maths needed a little more resolution that some refinement on the position of the magnet may have helped fix. 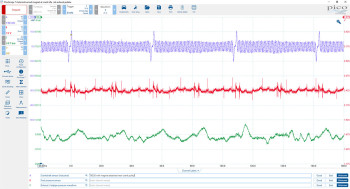 The capture above was taken with the engine at idle with no load. As you can see, the fuel pressure doesn’t look too erratic but the focus here is the exhaust pulse. Normally we would be looking for a nice even pattern but it is more erratic on this machine.
By loading the engine and putting a little more time on screen we could begin to see a pattern emerging. 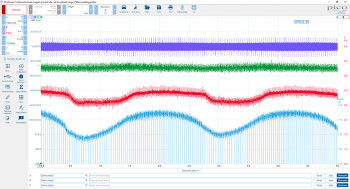 We can see that the rail pressure is reacting to the slowing down of the engine speed and that it is being controlled. This tells us that fuel isn’t our area of concern. Because of this, we could turn our attention to air in the combustion system.

Going back to the serial data available to us through the screen, we observed the MAF, EGR and boost pressure. All the expected and actual data are the same when the machine is at idle and under load. MAF had an interesting unit choice though, being in kg/s. I don’t think this helped us when the engine was hunting, as the value didn’t change much when in reality it would have to be changing due to the change in engine speed.

We had the luxury of a sister machine with the same engine on-site that was without any faults. When we compared the live data between the two, they were almost identical. We had already discovered that the MAP sensor was impossible to get to, which meant we had to get a little creative with the WPS500X. Fortunately, there was a blank in the intake manifold, which to our surprise fit a spark plug adaptor from the WPS500 kit! This meant that we were able to see MAF, fuel rail pressure and intake manifold pressure. The MAF sensor is a digital type, but inverted, as seen on some PSA vehicles. By using the inbuilt frequency math channel, we could easily graph this alongside the other channels. 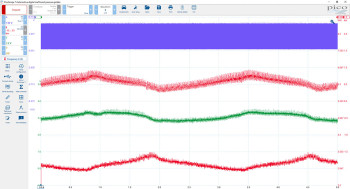 When looking at the frequency math channel for the MAF sensor we have to remember that it works in the opposite way from what you would expect. The faster the air the lower the frequency. From this, we can see that the rail pressure is following the same pattern as the intake pressure and airflow.

Tech Tip – To invert any math channel you can put a minus sign in front of the channel letter. E.g to invert the frequency math channel above you would type freq(-A).

While connecting to the MAF and the manifold, I stayed on the top of the machine to ensure that the connections were maintained and that the WPS500 adapter didn’t eject itself from the manifold. While the machine was being loaded, I heard something that I hadn’t done while I was on the ground.

When listening to this, you should be able to hear the rush of air as the machine is loaded, which can mean only one thing. A hole on the boost side of the intake. As mentioned above, this was not audible when standing on the ground or from within the cab.

When tracing the sound, we found that the housing for the MAF sensor had rubbed a hole through the boost pipe from the turbo to the intercooler. 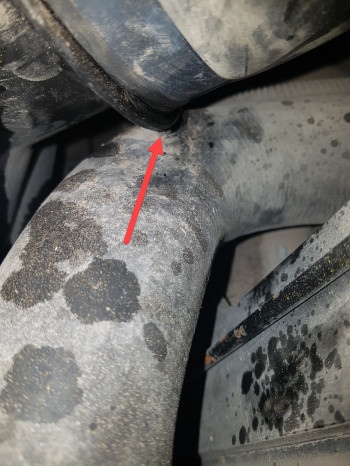 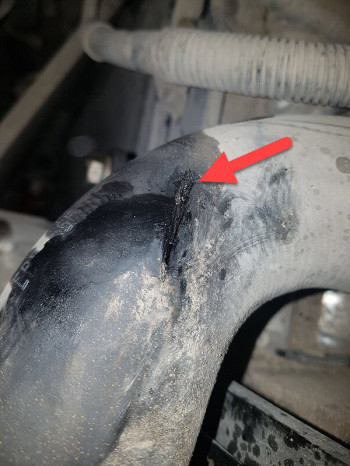 This appears to be a slight design flaw in the MAF housing, which over time has cut through the pipe. Due to where the pipework was located, it was impossible to hear this over the normal noise of the machine during operation.

While I was convinced this was indeed the issue, we made a temporary repair to the split and loaded the engine as before to verify any fix of replacing the pipe. 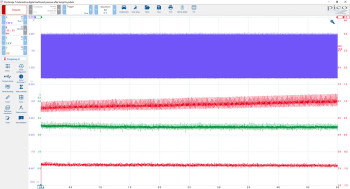 By using the same time base, we could do a comparison. In the capture above, we can see that the intake manifold pressure is consistently rising throughout the buffer, reaching 1 bar at the end. When compared to the previous capture, the boost pressure didn’t make it to 1 bar and was dropping down to under 0.5 bar before building again. The engine was no longer hunting and although there was some black smoke, it wasn’t anywhere near as bad as before the temporary fix.

We were left wondering why the problem was only evident once the engine was warm. One theory is that the rubber pipework had hardened over time and that this rigidity was allowing the pressure to build up while the rubber was cold. As the engine and the air temperature warmed the pipework, the rubber would become more supple which in turn would allow the hole to open and cause the drop in pressure. As the engine rpm dropped, so did the boost pressure and so the hole resealed, allowing pressure to build once again and so repeating the cycle. This is just a theory and it would be really interesting to hear if any of you have any thoughts on this.

It’s very easy to get lost in a fault like this, especially when nothing is obvious. By using the scope, we could visualise the interaction between the sensors to find the relationships between them. I’m sure a few people might have gone down the smoke test route, but I’m not sure it would have shown up based on the amount of pressure that would have had to be generated as well as the location the cut was in. I have a limited knowledge of smoke testers and I am unsure if they are designed to pressurize to this amount but would be happy to be told otherwise.

Thanks to Roy Sturges of RCT Power Services for inviting me to come along for this adventure!