I thought I would share one of my recent troublesome vehicles with you; I admit that the fix is probably quite obvious using the parts darts technique or best guess scenario, but I thought this particular job demonstrated the use of the WPS500 as an everyday aid to speed up the diagnostic process.

The vehicle in question is a 2010 Ford S Max diesel, which had a history of repeated sudden power loss (vehicle in limp home mode) with a recorded DTC for overboost detected. I apologize for the lack of “P codes” and accurate description as given by the diagnostic tool upon initial interrogation, but, in my defence I can state that the description did lead me to believe that the vehicle was producing too much boost pressure albeit intermittently.

As is our normal approach we carried out a global scan of the vehicle's various control units and identified that the PCM had detected an overboost condition, along with a myriad of DTCs all relating to components associated with boost pressure generation. E.g. MAP sensor circuit, turbo position circuit fault and turbo pressure control circuit fault.

We cleared down all of the DTCs, therefore starting with a blank canvas and carried out a road test at various speeds and loads. At this point I must mention that the vehicle performed impeccably, with no reduction in power and a crisp response to all demands made on it. We returned to the workshop and carried out a further check of the PCM error memory and sure enough 1 DTC had been recorded for an overboost condition, we assumed that the vehicle had to experience the same fault over a prescribed drive cycle to actually cause limp home mode.

Our first diagnostic route was to observe live data whilst exercising the accelerator in the workshop; at this point we had discounted all the previous DTCs as erroneous, due to perhaps previous disconnection of the various aforementioned sensors and actuators. Live data did not produce any helpful data only to confirm that boost pressure was occurring as confirmed by the MAP sensor.

So out with the PicoScope to confirm that the MAP sensor was accurately displaying the pressure generated in the manifold. This vehicle’s system employs a standard 3 wire sensor which provides a 5 V reference voltage to the sensor, an earth and a linear increasing voltage signal output proportional to the pressure recorded by the MAP sensor. The process was carried out with the aid of a Mityvac switched to pressure generation and basically removing the MAP sensor and connecting the Mityvac to the MAP sensor pressure port and with key-on-engine-off, apply a known good pressure to the MAP sensor and observe live data to confirm accuracy. We also observed the signal trace over a long timebase monitoring any glitches that may occur due to a faulty sensor (an obvious fault, that would not necessarily be recorded in live data due to the length of time of the glitch e.g. ms or even Âµs), the sensor was also agitated to observe whether the fault was due to an internal fault in the sensor causing an intermittent high pressure/voltage reading due to engine vibration, and lastly the sensor was heated to see if it may have been temperature related. None of the above displayed any errors.

With nothing untoward noted our next operation was to check the operation of the actual turbo actuator and as we already had the Mityvac to hand it seemed the most logical route to take. This management system also utilizes a turbo position sensor, located in the actuator capsule to enable the PCM to monitor turbo position. This is a similar 3 wire sensor to the MAP sensor, namely a 5 V reference, earth and linear voltage signal which increases as more turbo boost is required; the actuator movement being recorded by the sensor. I must point out at this point that the order I elected to test the various components was based purely on the ease of access, and that on a different vehicle, depending upon component location and access I may have opted for a different order of measurement and diagnosis. I also concluded with the absence of DTCs other than actual overboost that the reason for the fault would be of a mechanical nature not electronic control. With the engine running and the Mityvac now switched to vacuum operation, we used a T-piece and teed into the vacuum hose at the variable vane actuator vacuum capsule. Here we could observe the amount of vacuum applied to the capsule and therefore the control applied by the turbo pressure control valve. An increase in engine RPM resulting in an increase in vacuum and turbo boost pressure and prompt reduction in vacuum and turbo boost pressure when the engine revs decrease. With no faults again noted we then attached the Mityvac directly to the turbo actuator capsule and with key-on-engine-off only, exercised the actuator throughout its entire range noting that it promptly reached its maximum and minimum stops dependant on whether vacuum was present or not. With the aid of the PicoScope we were also able to monitor the turbo actuator position electronically and prove the promptness of action in response to applied vacuum.

At this point our conclusions were that we must have an intermittent vacuum solenoid fault and assumed that either the PCM was not effectively controlling it or that the solenoid was not responding promptly to the command under road test conditions. The valve itself is a little difficult to access on this vehicle, but with the Pico break out leads we were able to extend the wiring to gain access in order to carry out our measurements and again we could observe PCM command and resulting vacuum applied to the turbo actuator. The PCM appeared to have control over the actuator and the actuator responded immediately to the command by either increasing or decreasing vacuum dependant on engine speed and load. Wow where to now?

We needed to take all these measurements on the road as it appeared that the fault only occurred during actual driving conditions, something we could not replicate in the workshop (no rolling road). So out with the WPS500!

We then carried out a road test over the same route whilst recording the whole procedure with our PicoScope attached set up with a long time base and also our diagnostic tool to keep checking if an overboost condition was logged. The attached image was taken from a clear error memory to the fault actually having occurred, again with no difference in driving characteristics.

We had found the fault! Between the cursors it is clear that the vacuum (Channel D - Yellow) to the turbo actuator had been vented, so we now had proof that the control was taking place yet the MAP (Channel C - Green) was still registering full boost and the turbo position (Channel A - Blue) was somewhere around halfway through its range of movement. The command from the PCM was of no value (Channel B - Red) as the valve had functioned correctly, dumping vacuum. 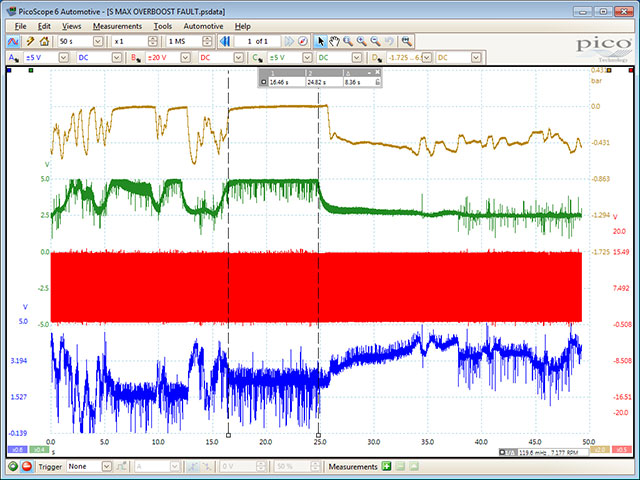 Even though the turbo actuator moved throughout its entire range in the workshop, under road conditions exhaust temperature would substantially increase and cause some expansion within the turbo/vane housing and due to some carbon build up would restrict the movement of the variable vanes and hence cause the overboost DTC to be set.

Can you add a psdata file. I wish to analyse the PWM signal (red)

Same problem on my 2007 S Max, your report a great help, thanks

Hi, which gear you road tested?