I had a customer's 2007 JEEP Compass , European Spec, fitted with the VW 2.0l TDi PD engine (code BLY). Unfortunately standard VAG software (e.g. VCDS) cannot communicate with this ECU (due to it being a JEEP). Communication via standard EOBD displayed "No Codes" although the check engine light was illuminated, and a misfire fault was present.

At this stage I needed to determine 3 things:

I now knew that the problem lay in one cylinder but had no idea which one. In the PD engines the injectors are fed via a multi-plug at the rear of the cylinder head. It is a very simple matter to connect a current probe to check the current waveform of all 4 cylinders via the common supply wire. It is also very easy with a second current probe to get the waveform of cylinder #1. Thus in seconds I was able to see that all 4 injectors were being actuated evenly and drawing very similar currents. This quickly eliminated any possibility of an electrical source being responsible for the misfire. I now needed to see which cylinder was misfiring. Normally I would check the Crankshaft Position Sensor (CKP)  waveform , but:

As I was already connected on Ch A to the alternator I decided to use the variation in alternator output voltage to find the misfiring cylinder. By setting the scaling of Ch A to x10, I was able to focus very clearly on the slight variations in the line voltage. By setting the low-pass filter to 400 HZ I was able to further enhance the signal and produce a very clear series of voltage readings which varied consistently with engine rotation. 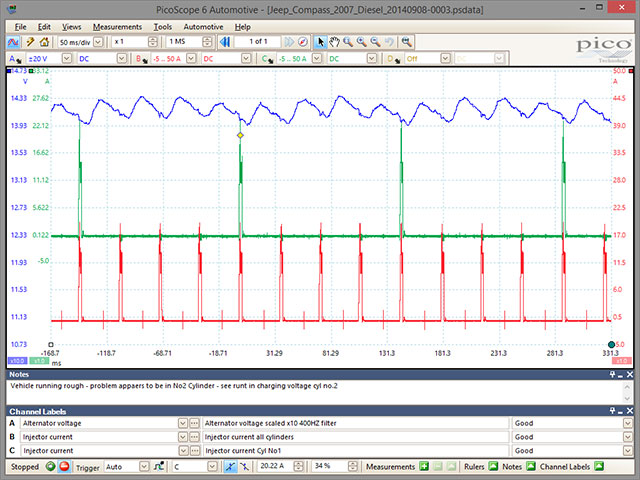 Knowing that the firing order was 1342 I could immediately see without the use of tools apart from my PicoScope that the misfire was in cylinder #2, and that it was a mechanical injection fault rather than an electrical one.

You can know cylinder#2 misfire from the waveform. But how can you get a conclusion for a mechanical injection fault? You said the current waveform without problem.

Thanks for the contribution. I’m interested in a more detailed view of the injector current. Can anything lack-of- Pintle opening be observed in the current-waveform?

Well done Daniel. It’s always great to see methods and processes to find mechanical problems using non-intrusive electrical ones!
Using the alternator output and marrying this to the cylinders is a great idea, especially when the management system uses digital RPM. I’ll have to try that one myself!
My only question is what method you used to tie the low charge to cylinder 2? I’m guessing you paired the low alternator output to the injector 2 trigger from the ECM?

To find out which cylinder is not firing properly spray all the exhaust outlets with wd40 or simular and see which one takes the longest to evaporate simples.

I am not understanding the graph. If the four peaks green represent four different cylinders? What trace is supposed to be showing only #2 cylinder is different? Please help me find Waldo.(G)

Nice bit of lateral thinking Daniel.  Just to confirm, it’s the slightly lower peak alternator voltage after the cyl no.2 injection pulse that’s the give away?  Due to the misfiring of this cylinder not momentarily accelerating the alternator as much as the other three?
Thanks & regards,
Ian

An interesting way to find the problem. I wonder how the scanner should work with this car?

Spot on diagnostics. I arrive at similar conclusions using my pressure transducer in the exhaust. A misfiring or miss fueled cylinder can be diagnosed by its lower peak value compared to the other cylinders. The position sensor is used on the second trace to sync pressure pulses with firing order.