There can’t be many workshops that have not seen the DTC (Diagnostic Trouble Code) P0420 Catalyst efficiency below threshold. It is becoming something of an epidemic these days and the fiercely competitive catalyst market has driven down the quality of the after-market product to the point that, at best, you would be lucky to pass your MOT emissions test the following year. Disputes with suppliers are not uncommon and often the supplier will argue that the vehicle has underlying issues that have not been addressed. This might be true in some instances, but we need to prove our case, if we are to fix the car without being “out of pocket”!

As of August 13th 2009, a new regulation came into effect that makes it an offence in the UK to sell or install a non-approved catalyst to a car or light commercial first registered after March 1st 2001. Hopefully this will bring an end to the misery and expense that affects both customers and workshops. In the meantime we need to know how to diagnose and recognise a failed or partially failing catalyst.

Some scan tools have the capability to display live data in a graphed format and this can give you the information you need. However, not all scanners have this function and sometimes we are left with just OBD coverage as our only source of info! Fortunately, modern technology plays into our hands a little here and with the use of the oscilloscope we can utilise the downstream Oxygen Sensor signal to tell us how well the catalyst is performing.

Although we are seeing many instances where various types of Wide Band Oxygen Sensors are fitted in the pre-catalyst (upstream) position, generally we will encounter a conventional Zirconium Dioxide type Oxygen Sensor fitted in the post-catalyst (downstream) location. This is helpful, as the major function of this sensor is to provide information to the Engine ECU about catalyst performance.

Once a fully functional catalyst is up to working temperature and is “lit”, we should see a nice “flat line” signal from the downstream sensor, which shows that the exhaust gases have been successfully converted. If you were to remove the catalyst altogether, both Oxygen Sensors would report the same condition, although the downstream sensor would display a delayed reaction due to its location and might also take a while longer to reach operating temperature. What we need to do in our diagnosis is recognise the difference between these two conditions and make a judgment about the efficiency of the catalyst.

Recently I had a 2003 Dodge Ram 4.7 litre V8 booked in with the MIL (Malfunction Indicator Light) reporting a problem. With only OBD connectivity I managed to pull P0420 catalyst efficiency bank 1. In the following waveform I am monitoring the output of both upstream and downstream Oxygen Sensors from each bank, taken from “key off” to start-up and straight away to fast idle (2,500 RPM). We can see clearly the difference between a good a bad catalyst, as the signal on channel D (in yellow) displaying a successfully converted exhaust gas, as opposed to the red signal that almost mirrors the signal from the pre-cat sensor (in blue). 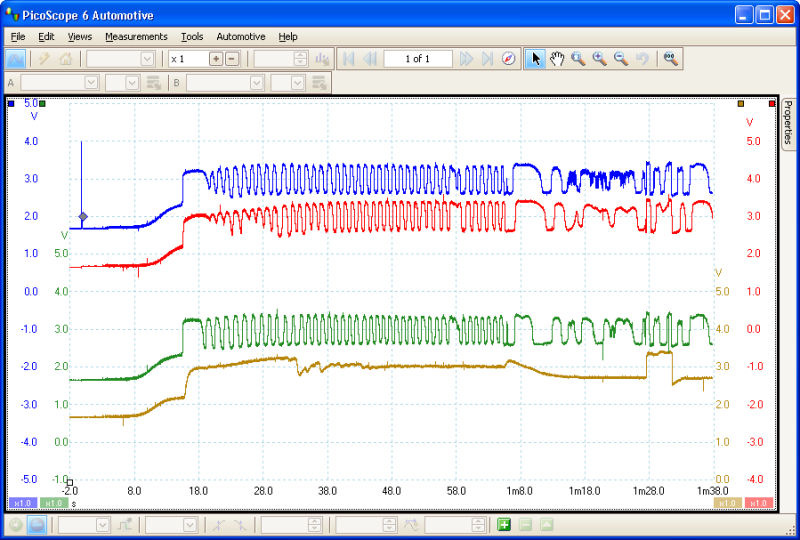 It is also useful to observe the reaction time of all the sensors during this type of test and, with repeated “snap throttle” events, it is possible to verify that the sensors are functioning correctly. This is a vital point and one that can add a lot of weight to your case against the supplier of the under-achieving catalyst. Armed with this information and also confirmation of fuel trims and the printout from your gas analyser, you will find that your point is proven.

Over time, you will come to learn the differences between a good, bad and even a marginally performing catalyst, by observing the downstream O2 sensor behaviour through varying engine speeds. Often you will see a catalyst take extended preconditioning periods before it achieves “light off”. Other times you will see a catalyst that copes well with gas flow at low engine speeds, but starts to show minor symptoms as the gas flow rate increases at a higher RPM.

The waveform below explains what information can be drawn from a simple capture.

It is hard for anyone to argue with a conclusive waveform printout as displayed above. It really does speak for itself, I think.

I don’t know if i am reading the the trace wrong, please correct me if i am.  but in the first section the post o2 seems to be reading on the rich side around what would seem like .6v if the cat was functioning correctly wouldn’t that post cat be reading lower.

I have a graph of my newly mounted TopCats convertor on my Toyota Avensis Verso 2.0 VVT-i 2002, showing that it’s not working well and would like to upload for others to see and learn.
Please let me know how to upload this file

Good explanations. But, why is there a ~2.5V positive offset for all four waveforms on the first image? Whereas the second image shows a (much more common) ~0.5V sensor switch point (cross-count threshold)?

A very informative presentation - a good example using a v engine to compare banks.
It’s also worth using an I.R Temp gun to compare temperatures at either end of the Cat, as a quick confirmation of your suspicions before unboxing the scope.

There really ought to be more legislation regarding their quality of aftermarket parts in general as their poor quality and failure rate only reinforces the public’s view of the motor trade as cowboys when we have done a good job of repair or diagnostics only to be let down by aftermarket parts.
Maybe there’s an argument for all replacement parts to be oe by law?

Good article that highlights the task we face in getting a better suppply of cats, the only trouble now is getting the cat suppliers to pay the labour for diagnosing there poor products, its only if we all stand together and demand a better product we will win that fight, nice to see we are not the only frustrated garage out there.

Nicely presented as usual, great explanation, and I echo Rogers sentiments thanking you.

Hi Dave - Great explanation, simply presented. Pretty conclusive stuff, too! Shows also the advantage of having 4 channels, and being able to capture quite a bit of information from several sources. The explanations regarding the relationship of function, time and effect are superbly presented. Classroom stuff bought to the workshop. This just shows how useful the scope is, and how you can’t be doing it right if you don’t have one? Great job!

Very nice explination and the scope pattern really supports the findings.This will be much easier to “lay blame” on a poorly designed cat. Where were the test leads hooked up?

Dave Superbly professional presentation as usual from you, thanks for taking the time and effort to post your article, I’m sure a great many fellow technicians would join me in expressing our sincere thanks for your presentations.

Was unaware of the legal change a while back, thanks for that. Although Id like to see the logistics behind enforcing that. Yeah, the aftermarket stuff in majority cases just wont satisfy the MIL; they should come with a sticker “Do you feel lucky?”. A few of my trade customers have been hit with standing the cost of new OE replacements because the vehicle owner wont pay twice.

Aside from that, its difficult convincing a vehicle owner to pay double for an OE unit when they see an aftermarket unit for less. Maybe its as simple as supply and demand.

I too have seen some terrible aftermarket cats that really are not fit for purpose. Quite often an aftermarket replacement cat is almost half the size of the original… how can it be as efficient??