My approach to this problem was to take the car for a spin and look out for driveability problems concerning the engine. I soon found out that the car was almost impossible to drive when engine speed was between 1200 rpm and 3000 rpm. Within this range the engine would cut out, but when passing 3000 rpm it ran almost like normal.

The next thing I did was to connect my serial tester VCDS (VAG COM) and look to see if DTCs (Diagnostic Trouble Codes) were present. To my big surprise — there were none stored. This engine ran really bad and yet no DTC!

When looking at the measuring block 003 on VCDS (this measure the MAF airflow) I could see that the specified vs. actual value was wrong, by around 130 mg/stroke. It showed 130 mg/stroke more than it should. My focus then shifted towards the EGR (Exhaust Gas Recirculation) valve and the operation of this as it determines how much air there is drawn into the engine.

I then switch to basic settings in VCDS to perform an actuator test on the EGR valve and its components. I did the test and could see that when the EGR valve was not active it draws 980 mg/stroke of air through the air mass sensor — it’s almost the double of what is in expected in limp mode (very basic mode in which the car runs in order to get the occupants home) which is 550 mg/stroke.

I then checked all the vacuum hoses for leaks with a vacuum pump and the function of the exhaust recirculation valve (N1), I found that nothing was outside the specified parameters.

With these preliminary checks in mind — I concentrated on the air mass sensor and its function. My conclusion was — if the EGR valve is okay — the only thing back that controls the amount the air through the engine is the air mass sensor.

With my PicoScope I connected to pin 5 on the air mass sensor. Pin 5 is the output pin and with engine idling it should output around 1.9 volts DC. Then I got confused — I thought I may have picked the wrong pin number. I checked my wiring harness diagram again and sure enough — it was the right pin number… “but it can’t be true?!” …the air mass meter was sending out a static value of 6.95 volts DC! Additionally there was no change in values when I revved the engine. 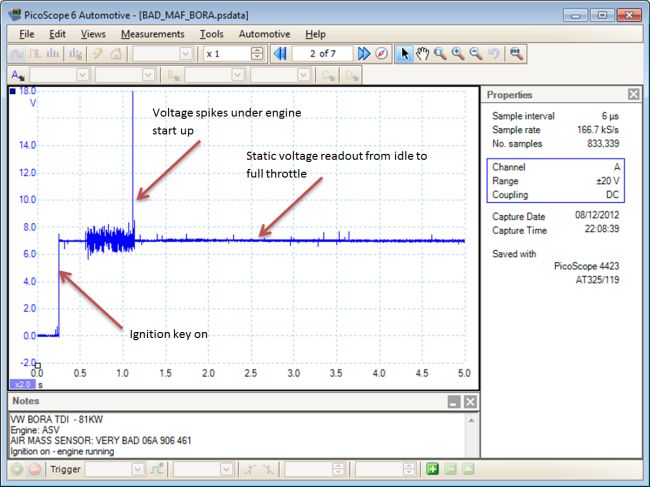 I now fully understand why it ran so poorly with such a bad air mass sensor.

A new air mass sensor was fitted and the engine got its normal idle again and could now take full throttle without misfire and cut outs. 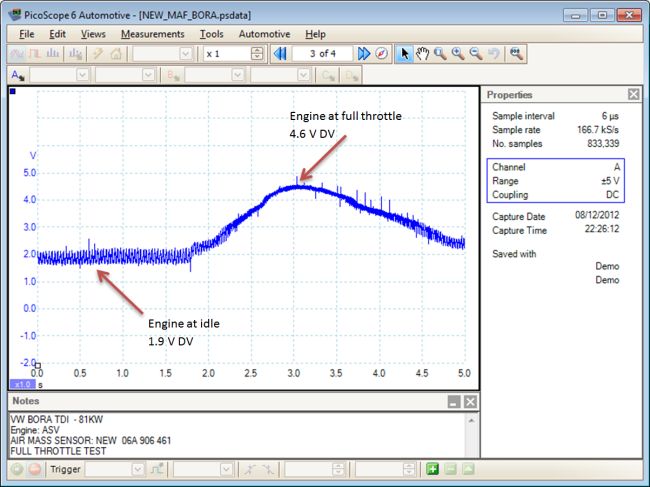 What I don’t understand is why it did not set a DTC when the air mass sensor was that bad!

Yes - theoretical the engine could only draw in 475mg of air per stroke.

From the above - wrote i this.

The specified values for the air mass sensor at idle speed with the egr valve not active are 400 - 580 mg/str - so the reading i got at 980mg/str was to much.

Regards the scanner live data & scope data disparity in relation to the MVB3 & scope tests. If you unplug the MAF on this engine & look at the MAF readings while running from WOT to idle you will see the MAF reading rise & fall in line with good known values. The PCM substitutes a set of pre programmed (mapped)values when it can no longer see the MAF. That is why the scope is so important, other sensor failures also cause this phenomenon of displaying a healthy live reading on the scanner. Granted, if you unplug the sensor a DTC will be logged, but don’t expect to always see a DTC on Bosch EDC on VAG, I’ve seen some glaring faults on these engines not logging DTC’s. Only one query, shouldn’t a 1.9 engine running no EGR only draw a maximum of 475 mg/str due to the physical boundaries of the cylinder displacement? i.e 475mg/str x 4 = 1900. You stated a reading of 960mg/str as within limits, wouldn’t that be correct for a 3800cc engine?

Well done Kim, a really nice write up. As with a few others here I would of also investigated EGR as during your roadtest you discovered that the running issue was only at a certain engine RPM which ‘could’ indicate EGR issues. And as airflow readings are the true sign of operating EGR it is a legitamite area to explore, especailly if serial data was showing air flow change (maybe a calculated figure?)

Yes - there were added a lot of fuel. The car was sending heavy black smoke out under a acceleration. In the lower rpm area the car were sluggish - like it was in some sort of limp mode - no power at all and when the rpm increased to around 3000 rpm, it then suddenly becomes more normal or almost normal.

But i am still puzzled about its not setting a DTC !

I guess its the same as when a coolant temp sensor sticks at one voltage output, If its within its operating parameters it will not flag a fault code? The faulty air mass was chucking out quite a high voltage wasnt it, must have been adding a lot of fuel hence better running at over 3000 rpm. It all makes sense when you found your fault!

To Antonio.
Regarding the missing dtc or MIL - there is in fact a DTC that covers the air mass sensor ( G70 ).

It must be as you said, that the values is within its upper and lower limits that the air mass sensor works - though it sounds strange and come to think about - how long a value could be high or low before it sets a DTC - is it milliseconds or seconds we are talking about ! IÃ‚Â´m well aware there must be other parameters that has to be included in this calculation.

To Henk Castens
I haven’t come across a measuring block in VCDS where you can read out voltage on the air mass sensor (G70) yet - but i can be mistaken.

The reason there was no MIL on is because this engine (ASV)is not a Euro 5 anti-pollution type and the MAF was sending values in between its window of work. More than a preciosism it should be told that this sensor its a debimenter rather a MAF.

a well choosen route i would have checked egr too as it is a relationship,maybe keith would be good enough to post one of his diagnostic issues.a first time fix with the use of pico… guessnostics not an option.well done and a good report.

It seems that connecting the scope to pin 5 influenced the reading,  as you described that you had variations before,Keith’s comment therefore NR, no offense. Higher than normal MAF can also be caused by ruptured hoses in the the turbocompressor’s discharge side or by too high a turbo pressure for instance. VAG Com also can also read the MAF voltage BTW, but as said it probably would just have displayed a higher than normal value but probably not higher than 5V, otherwise it would definitely have set a DTC. I think your approach was OK, there are many roads that lead to Rome as the saying goes. In hindsight we would all almost always have done things differently, but then we didn’t know everything yet 😊

When I used my VCDS and observed the measuring block and gave the engine some RPM the values changed from 420 mg/str to 1080 mg/str - which is extreme values. It was first when i got my Picoscope connected, i could see a fixed value. I could also as a option used my multimeter.

Great piece of analytical diagnosis,starting from first principles and following through logically.I wonder how long it took after the test drive to reach the conclusion that it was the Air Mass Sensor.. Well done for a correct analysis and conclusion.Many lessons learned there I reckon for future reference and for others with a similar situation!

Maybe I’ve misunderstood your description but surely when you first looked at the measuring block for the live data of the MAF and see that it was not the desired value you would have changed the rpm to see if the reading changed. If it was infact at a fixed voltage you could have then scoped the sensor confirming the fault without all the additional EGR checks. As for no fault codes some earlier engine management systems seem less sensitive to some faults than others.