This is the tale of a 2002 Ford Explorer with an idle quality complaint. According to the customer the idle would surge, especially when first started and would even stutter a bit when put into gear. As the engine warms up, the problem fades and is much less noticeable. When I got the car, I could feel the misfire and an overall harshness in the way the engine was running.

The history revealed that this complaint had been raised many times before and treated without success. The last tech assigned replaced a leaking vacuum line and cleared the memory, so there were no codes or Mode $06 information available for me to see. I had a new diagnostic aid I hadn’t had the chance to put to the test yet, the ACE Misfire Detective, a software program designed for use with the Pico Technolgy DSOs (Digital Storage Oscilloscopes) and the SenX FirstLook pressure sensor. By monitoring the exhaust pressure pulses on a running engine and synching them to the #1 cylinder’s ignition, the software can help identify not only the amount of misfires, but which cylinders are contributing to the problem.

I ran three tests using this software, and all three reported misfires on cylinders 1, 2 and 3 with #1 being far and away the worst offender (see figures 1a and 1b). 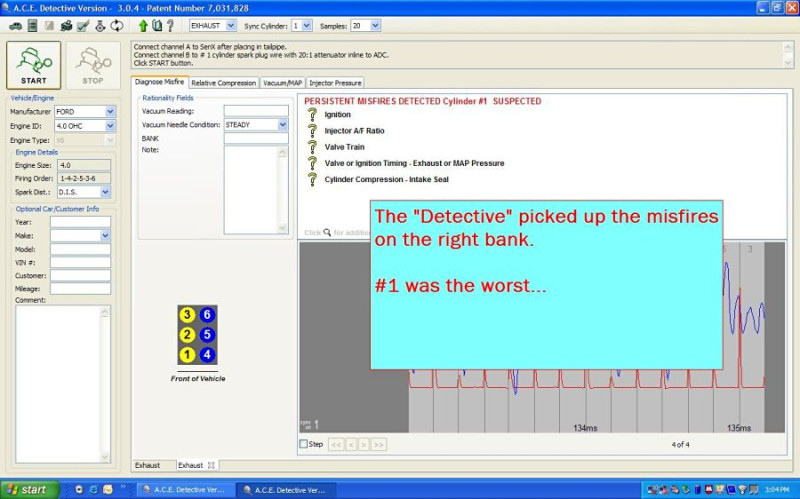 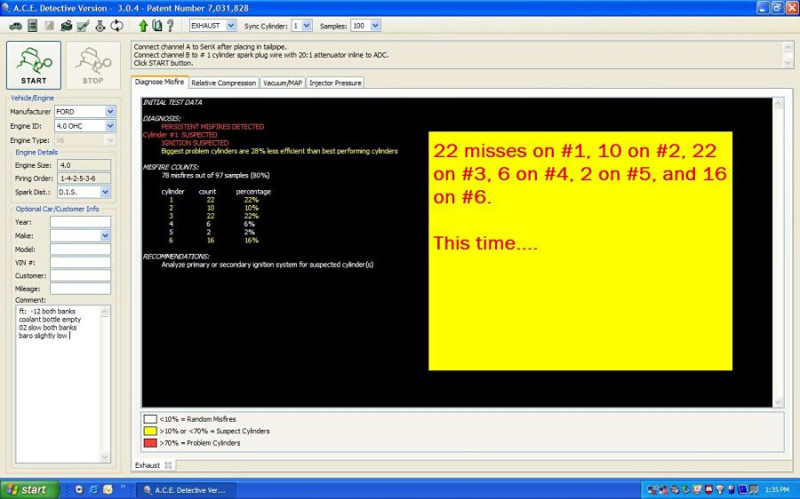 The counts, however, were not consistent and one test reported misfires on some of the right bank cylinders. I wasn’t looking for exactly the same results…the counts were sufficiently different to raise an eyebrow though. What would make the misfire rates differ that much? On with the investigation…

Misfires are caused by ANY condition that affects the quality of the combustion process. That means variances in compression, spark and fuel can all contribute their fair share. The next step I take is to gauge the health of the engine, so a relative compression test was next on the list. Pico Technology have a diagnostic software of their own, and it performs a relative compression test by simply hooking up to the battery. The scope then measures the normal AC ripple coming in from the alternator, on the theory that if engine rpm is affected by misfiring cylinders (the engine slows down, even if only for a millisecond or two), the AC ripple wave will act like the crankshaft sensor and also vary in frequency. The results are then posted in a bar graph format, with the healthiest cylinder labeled as #1 and the rest listed in the normal firing order of the engine being tested.

It is a quick look, but can’t isolate what cylinder(s) are actually low on compression. I ran this test three times as well (see figure 2). 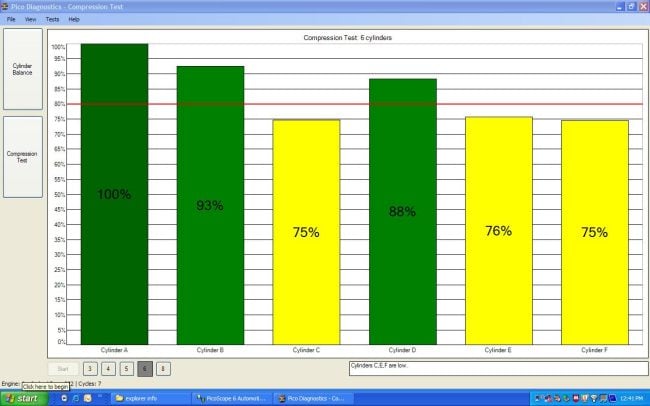 OK, let’s get more specific and test using the FirstLook. This can be a standalone test or done with the ACE program, using the relative compression tab on the screen (see figures 3a and 3b). 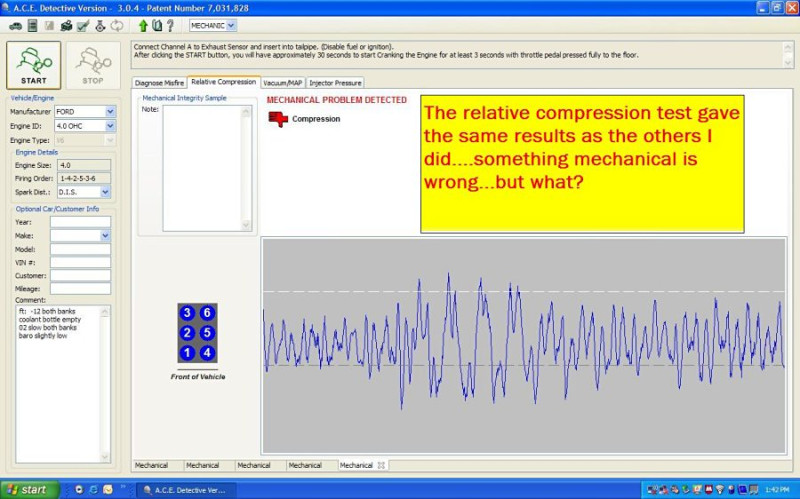 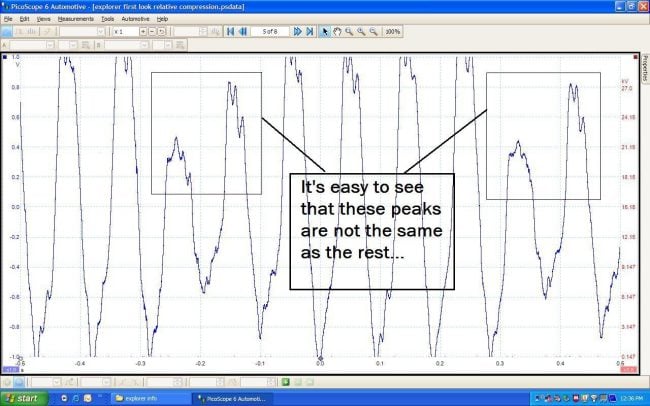 Again, I got varying results. Whatever was going on, I definitely had a mechanical issue of some sort. Now I moved the FirstLook to the oil dipstick tube to measure pressure variances under the pistons. This test checks the ability of the rings to seal…if the pressure pulses here are even, then at least I’ve narrowed the problem to the valve train (see figure 4). 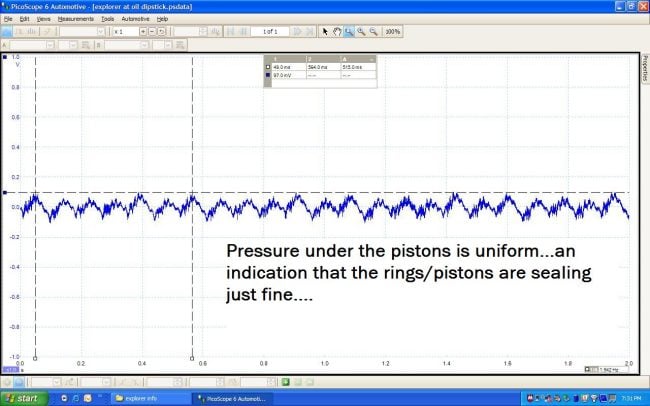 This test passed, with all peaks being relatively the same, so I knew that the problem was up top. Now to isolate exactly what was going on. I shared what I’d found with the boss, and got the authorization to tear it down and visually inspect the valve train (see figure 5). 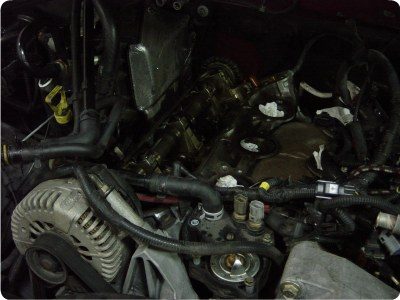 With the plugs removed, I happened to notice that all the plugs on the right bank still had the little tell–tale paint marking on the top of their center electrodes. That told me that they had never been changed. For laughs, and out of curiosity, I measured the resistances of the plugs themselves and found #1 measured over 15,000 ohms! Well, that explains why #1 was the worst offender and why the majority of misfires happened on that bank. It still didn’t explain the loss of compression I was seeing, so on I went.

I knew there were issues with broken valve springs on the 4.0 SOHC engine, so that’s the first thing I looked for. I didn’t expect to find any, though, since a broken valve spring would be more apt to cause problems at higher rpms and my problem was at idle.

I decided to see what I could see with a cylinder leakdown test, and hooked up my tool to the #1 cylinder, bringing it up on its compression stroke, and pressurizing the cylinder. Air immediately poured out of the intake valve, with a leakdown rate of nearly 100%! I reached over to the rocker arm to see if there was any play and found none…this valve was being held open. I repeated the test on the remaining cylinders and also found some leakage on the #5 intake as well, but not nearly as severe as #1 had been.

After I tested all 6 cylinders, I went back to #1 and repeated the test. Now the cylinder sealed fine! OK, why? What could cause the valve to be held open one moment and seal perfectly the next?

The only thing that made sense to me was a problem with the lifter. If it was sticking internally, it may hold the valve open just enough for compression pressure to be lost, and this could occur intermittently, explaining the varying results I had gotten in the relative compression tests earlier. This engine requires 5w20 oil, but in the real world of “quicky” lubes, I knew it was likely that this engine had the wrong oil in it once or twice.

I showed the boss what I had found, and got the OK to replace the lifters and spark plugs. I followed up with a new oil filter and fresh oil, and fired it up. Engine smoothness was noticeably improved and a rerun of the Misfire Detective passed with flying colours. The boss drove it over the weekend, just to make sure, and it was returned to the customer the following Monday morning.

It had been several weeks, and the customer called to let us know the car was running great, and to tell us how happy they were to finally have their problem fixed.

Hi
It really reminds you that basics are important before you get to tackle complex elements.

I was very impressed with the write up, and its great to know that we have some very skilled automotive technicians out there. I’ve worked on engines as a hobby, so retain an interest in all thinks mechanical and electronic. I use my scopemeter for diagnosis on Control systems for Electric vehicles.

A nice job of explaining the variation of accesory tools used. However, I would have gone first to secondary scope annalysis, since that leads you immediately to the cylinder as well as the cause. Nevertheless Pete, nice job.

That was a really interesting diagnosis.

A very good example of following a logical train of thought completely, and a reminder that even modern engines still suffer simple problems. Well done, Pete!

Hello from Cape Town,
I find it a very good report. I also would start with Misfire Detective-which gives a starting point. But after that I would check the HV Secondary ignition first and not the compression and look what the bank has in common (for example the same ignition coil, etc.). Because compression problems are not common problems but ignition material problems are very common.I probably would replace some ignition components and get an improved engine. It would be only the half job and the customer would return the car and than I would do the other tests -like fuel injectors and compression.
What we can always learn is that you can expect anything on a old car. No book can tell you what can happen if the owner is doing no maintence or using (saving) on a wrong oil. A scope is always useful to have and to know how to use it.
Thanks for the report - in future I will leave the Senx in the tailpipe for that compression test.
regards
andy cape auto diagnostics (South Africa)

Looks like the hardest way to diag this issue.

In the new world of electronically controlled vehicles, it’s good to be reminded that they still rely on the same old mechanical basics, and that these fundamental checks are just as important today as they were before the ‘electronic’ age.

What’s particularly interesting about this article is that it clearly shows that the oscilloscope can readily differentiate between the various potential problems, be they mechanical, hydraulic, electrical, etc. - and quickly lead us to a conclusion.

We shouldn’t think that the oscilloscope is only used for electrical or electronic tests: more, as a tool for confirming a wide range of faults, which could otherwise require lots of dismantling, lots of head scratching, and lots of soul searching - not to mention a wider range of tools for various specific tests. It is in fact a ‘proving’ tool, which should be used either alone, or in conjunction with a scan tool, or other specialized tools.

The ACE Misfire Detective is clearly a useful addition to the Picoscope, which enables some further fairly conclusive tests to be made without major dismantling of major components.