Here’s another example of the oscilloscope being used as a versatile fault-finding tool. The fault itself is for the most part incidental here, but it demonstrates the level of information held within a recorded trace and how quickly you can be put on the right diagnostic path.

The case was a 1999 Fiat Bravo 1.6L with a complaint of intermittent speedo operation. The speedo would read correctly up to cruise speeds then would suddenly drop to almost zero. A new speed transducer on the gearbox had already been installed and a dealership had recommended a new instrument cluster be fitted at £400+; another incident where the cost of a new electrical component may render a vehicle uneconomical to repair. This car initially arrived to me as can it be repaired? I advised first to verify the fault and then decide what action to take, with a likely task of inspecting the instrument cluster in detail. But the first step was to see the fault.

The car was road-tested to recreate the complaint. While cruising at about 40 mph, it wasn’t long before the speedo dropped sharply to almost zero. Repeat testing showed similar results and I noticed it wasn’t directly linked to a certain speed: it was sometimes 30 mph and sometimes 50 mph before the needle dropped. The next step was to validate the speed signal arriving at the instrument cluster. If the signal displays the correct frequency in proportion to vehicle speed then focus of the investigation would rightly fall on the instrument cluster as already reported.

A speed signal can arrive at the instrument cluster in many forms i.e. through a serial line with the Engine Control Module, or a direct line from the ABS system, or through CAN, or in this application using a simple gearbox transducer connected directly to the instrument.

The instrument cluster provides the sender with a +12 V  power supply and a signal reference voltage of about 5 V. Under normal operation the sender modulates this signal line between ground and 5 V  creating a square wave pulse. As the vehicle speed increases, the frequency of pulses increases in proportion.

TIP: The instrument calibration is matched to the gearbox transducer, its drive, and the road wheels to generate a specific number of pulses over a given distance. Altering the road wheel circumference (modifying rims and tyres) will throw out the calibration and cause speed to be registered incorrectly.

As a general starting point, the scope was hooked up to the speed sender by monitoring the two power cables in and the speed signal out. It’s best to collect as much information about the fault as possible. 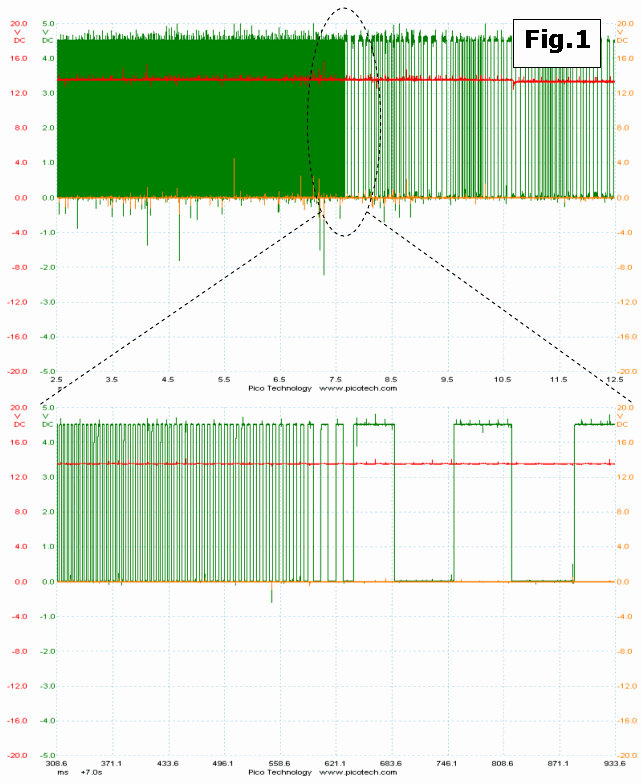 Fig.1 was recorded during a fault event where at steady cruise speed the needle suddenly dropped, and judging from the results this investigation has taken an unexpected turn. There are several important observations to make:

By applying these key observations it is possible to localise the fault to the sender or its drive connection with the gearbox. From this result, an appropriate test plan can now be formed.

The fault was traced to a damaged plastic drive insert that fixes to the gearbox. This drive insert is separate from the electrical transducer and did not get replaced by the previous repairer, so obviously it wasn’t spotted. This insert is a rotating shaft with a female sliding contact which had become worn and lost its grip with its male counterpart on the speed transducer, and as vehicle speed increased this was causing the two mating shafts to lose each other. A new drive insert rectified this complaint.

I’ll leave the obvious “parts fitting” approach for you to scrutinise. The purpose of this example and others is to highlight the importance of a recorded trace, which by a correct interpretation of the information held within can lead to a trustworthy test route.

There seems to be a lot of spurious noise embedded in the signal. Is this the nature of the environment or is it coming from the picoscope hardware?

A typical example of logical thinking and a superb process of elimination!
My compliments.

THIS WAS TECH WORK AS IT SHOULD BE DONE BUT NOT WHAT HAPPENS AS A RULE WHEN THE MECHANIC FOLLOWS THE SERVICE PROCEEDURE. A LITTLE THOUGHT AND MINIMAL SKILL WITH A DECENT INSTRUMENT WAS ALL THAT WAS NEEDED. TODAY, NO MECHANIC SHOULD BE WITHOUT A MEDIUM GRADE SCOPE AND INFRARED TOOLS AS WELL AS THE SKILL TO EFFECTIVE USE THEM.  I had basically Same kind of problem with in warranty new +5000 MILES 91 Chev cargo van cruise control which would only work after driving a few miles and the distance kept getting farther with time. Dealer had no cruise components. Service manual instructions = change three parts in sequence 1.wand 2. speed ecm 3.servo.  Dealer would only order in sequence and would keep van. Cycle time per part 30 days total 90 days if servo was bad. As owner, this was not going to happen. My choice = jack up axle, Verify with OSCILLOSCOPE that cruise was not working and that output from Tranny was good to ecm and that instructions to servo were correct. Everything was good to servo which proved to be in permanent “dump mode” Disassembled NON SERVICEABLE servo laying parts out on white towel. Dump solenoid slug was stuck in grease that Hencho assembler had used to facilitate his job. This grease had become stiff and only when very hot would let go. Cleaned out grease in all three solenoid slug areas and replaced with oil/graphite door lock lube. Reassembly was tricky but doable.  225 miles later it still works every time, hot or cold. NOTE: A NEW SERVO MADE IN THE SAME FACTORY BY THE SAME ASSEMBLER WOULD HAVE DONE THE SAME THING IN THE SAME 5000 MILES THEREBY REPEATING THE GRIEF. I used a lab grade scope but any dc triggerable scope would have given the same results. Like ignition scopes that will tell you things you had no clue existed, a basic scope gives you waveforms, dc levels, and shows you any artifacts that should not be there. This time, I verified the track of the instructions from the operator to and through the system and the inputs from the system and in minutes not months isolated the problem that GM says should be done by replacing using the “EASTER EGG PROCESS” of replacing in sequence and road testing.  IF YOU DON’T HAVE A SCOPE WITH AT LEAST ONE 100 TO 1 PROBE (YOU CAN MAKE THIS),,, GET ONE. LEARN WHAT IT DOES… SEE WHAT YOU COULD NOT SEE ANY OTHER WAY. Simple tools such as inductive pickups are easy to make using line cord ferrite filters with a few turns of wire to the scope input wound around them. NECESSITY IS THE MOTHER OF INVENTION AND A DECENT MECHANIC THINKS AS WELL AS WELL AS FOLLOWS INSTRUCTIONS. IF A SINGLE DAY GOES BY AND YOU DO NOT LEARN SOMETHING, YOU WERE ASLEEP.  OF COURSE, SOME SHOPS MILK THE PROCESS BUT SOONER OR LATER THE PUBLIC WILL BECOME AWARE OF THEM AND STOP BUYING. I DID SERVICE WORK IN A SMALL COMMUNITY FOR 40 YEARS AND ENJOYED THE FACT THAT THE CUSTOMER IS THE FIRST THING TO BE “FIXED” AND THAT IF HE IS NOT GOING TO GET HIS MONEYS WORTH HE MUST BE TOLD THAT. SOMETIMES YOU FIND GIVING THINGS AWAY WHEN YOU CAN AFFORD IT, IS THE CORRECT PATH. THE THING I OBSERVED THERE IS THAT STUFF COMES BACK AND YOU END UP WITH MORE THAN YOU WOULD HAVE WITH THE CORRECT PROCEEDURE. PEOPLE ENJOY BEING TREATED WITH RESPECT AND CARING.  AND THEY DESERVE IT MOST OF THE TIME.

I agree, Nick does a very good job & presents it very well.

“If you don’t soon scope, you soon won’t cope! “
WOW I wish I had thought of that comment.

Seriously though, I totally agree with you. I can’t imagine how I would go about my job now, without the scope. The ability to view & understand electrical processes give us the ability to move forward, where many workshops are still stabbing in the dark.

It is the customers that suffer in the end!

As always, a superbly presented article. Nick really does a first class job of presenting his case. He also clearly shows what’s required to avoid the all-too-frequent replacement of the wrong part: training, understanding, equipment.

I’m certain these articles encourage anyone struggling with fault finding to become more interested in oscilloscope diagnostics. If you don’t soon scope, you soon won’t cope!