MAF sensor seemed to be in range based on DVM measurement, .6 to .9 V DC. However, unplugging
MAF sensor connector allowed a stable idle and the vehicle was drivable with the occasional stumble but
no stall at idle.

Engine generally idled okay until it was shifted out of Park, and then it started surging. Going back into
Park did not return to a better idle and continued to surge.

Time for the scope! 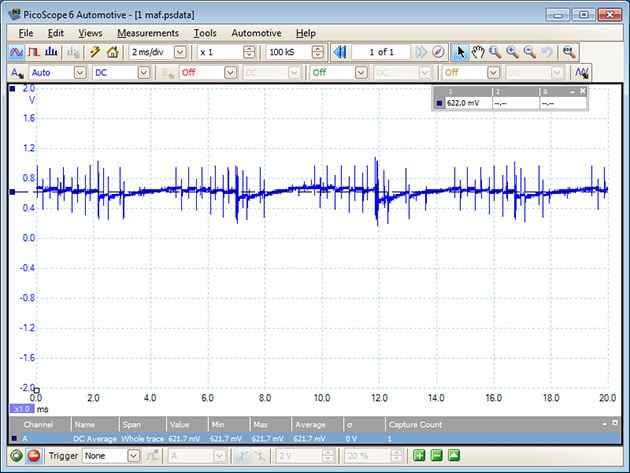 Here we have the MAF waveform after shifting out of Park- 1 V DC, saw tooth from MAF? 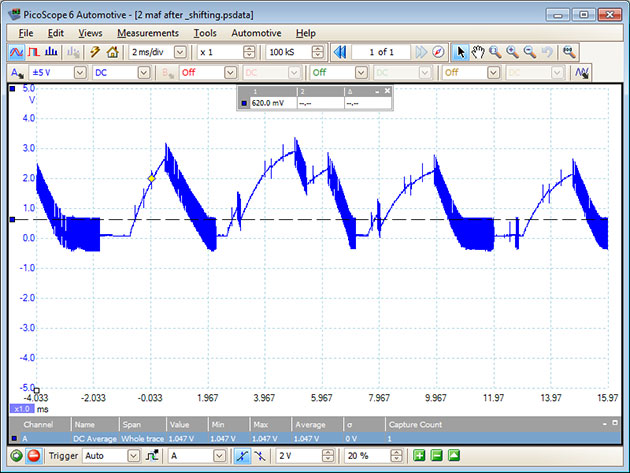 Here we see the alternator output and MAF sensor signal, where oscillations and switching spikes are
present. Could this be caused by the MAF or something else? Average DC is about .6 V DC 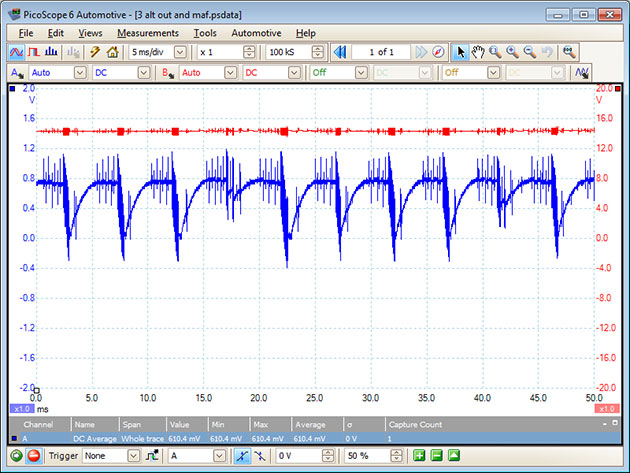 The oscillations would continue even after the engine had stalled. If the key was turned off and then
restarted, the oscillations were gone until triggered again by shifting. All accessible power and ground
circuits were checked and cleaned. I unplugged any accessible connectors; this improved the idle and
heavy spikes disappeared when the Axode2 connector to the transmission was disconnected. The
transmission pressure control solenoid (EPC) was included in that connector. 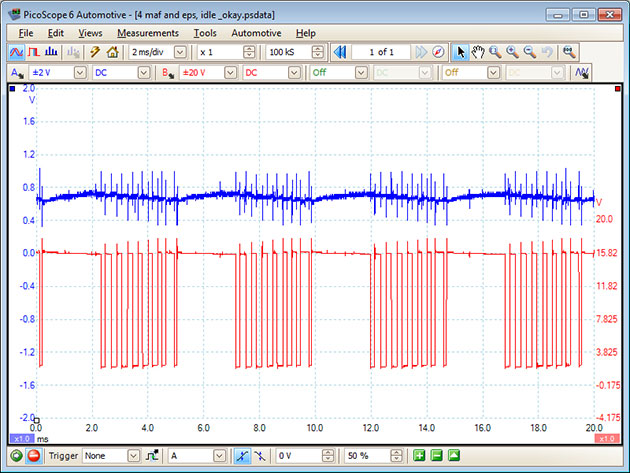 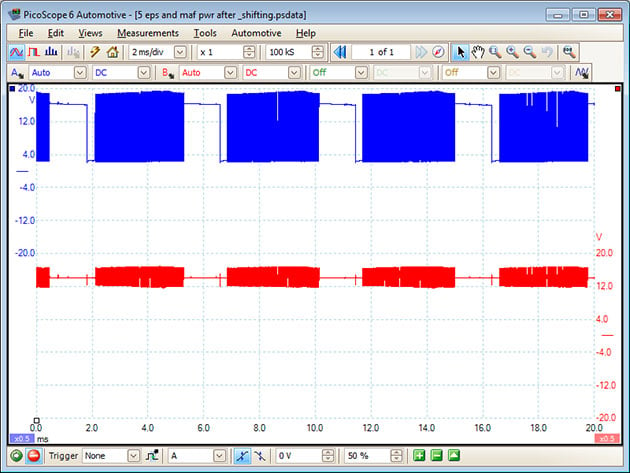 I wondered about the EPC solenoid chattering or having a failed snubber, but the instability was too
uniform. Applying an external snubber diode only made the oscillations worse. It seems that the ECM is
the primary candidate. Opening up the ECM revealed 3 bad electrolytic capacitors.

After changing the 3 electrolytic capacitors, the car is working correctly and as expected. 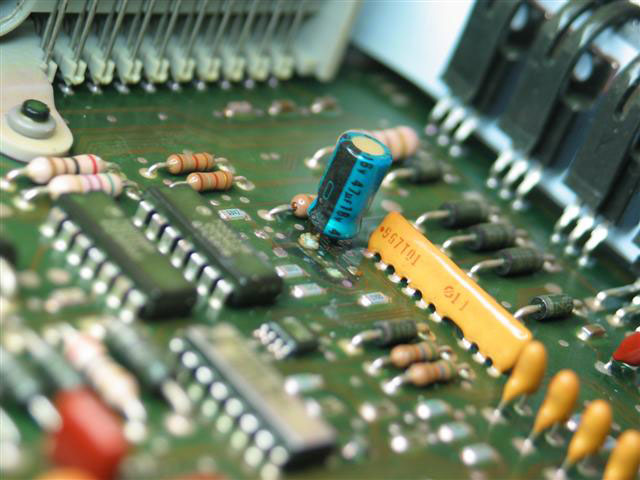 Also, With Ford MAF’s remember to look at the the Baro reading. If it is normal, the MAF is likely OK. If it is showing 150 at sea level, or worse, it will change fuel trims and back off timing for altitude. This is an inferred reading on MAF Calculations.

I wonder if ac or garbage was visible on the 5volt reference line rather than a flat dc. If so perhaps jumping a filter cap on the line to prove a filtering problem.

Good skills by observing the irregular MAF patterns and then observing EPC after drawing a link to the fault occurring when shifting out of park. Unfortunately more modern PCMS are less able to be opened up for inspection or repair.

Thanks to all for your comments.  And to Pico for their products and forums.

David Paterson- Interesting! You clearly have a pretty good understanding of the function of the electrolytic capacitor, which I suspect gives you a certain advantage of many of us! Would you like to share with us: a) How you spotted the 3 failed electrolytic capacitors; b) what caused their failure? This isn’t

>>Yes, I have a background in electronics.  Electrolytics are common failure points in electronics.  I think a typical failure mode in this application is temperature cycling which degrades the canÃ¢â‚¬â„¢s seal, allowing the corrosive electrolyte to leak out.  Corrosion of the capÃ¢â‚¬â„¢s leads or the circuit board are easy to spot.

James- In the photo of the ecm, can the failed parts be identified?

>>One cap is in this picture, the large blue can.  Note the corrosion where the left lead is soldered to the board.

Will- What is a snubber?

>>Coils store energy during operation.  When the circuit is opened a snubber provides a path for the energy to dissipate, protecting the switch or controlling circuit from a voltage spike (which can cause arcing at a switch).

—How do you know that a capacitor was bad?

>>All 3 showed signs of leakage, one measured low capacitance on a DVM.  I changed all 3.

—You did not mention if you checked the MAF sensor for contamination.

>>An internet search suggested Ford MAF sensors are subject to contamination, resulting in degraded idle.  Ã¢â‚¬Å“GoodÃ¢â‚¬Â, I thought, Ã¢â‚¬Å“this will be an easy fix with the magic MAF sensor spray from the local parts storeÃ¢â‚¬Â.  The sensor wires didnÃ¢â‚¬â„¢t look too bad, but I blasted them with the spray and hoped for the best.  No change.  Ford has the maintenance cycle built in- cooks the wires to burn off contamination.

James- Nice work, but did the Pico really expose the problems or was it the last resort to go to the computer.
Just a thought. still, nice call

>>Couple of things.  At first I didnÃ¢â‚¬â„¢t think I could get out the ECM without removing the AC dryer (and opening the system).  So I kept looking for another cause.  When it was down to something either inside the tranny or inside the ECM, I chose to make another attack on the ECM.  It was my lucky day when I discovered I could pull the ECM out (behind the interior glove box) without making changes on the engine side of the firewall.  I briefly considered (a few nanoseconds) troubleshooting the ECM with the caps in place, but I didnÃ¢â‚¬â„¢t have a schematic nor any easy way to operate the ECM on the bench.  The scope would have been necessary on that quest.
If I had known how to remove the ECM early on I would have solved the issue much earlier.  Without the scope and not knowing how to extract the ECM, I might have submitted to changing out numerous other components, all to no avail.  The scope was instrumental (duh) in getting the problem down to 2 possibilities.

Nice work, but did the Pico really expose the problems or was it the last resort to go to the computer.
Just a thought. still, nice call

What is a snubber?
How do you know that a capacitor was bad?
You did not mention if you checked the MAF sensor
For contamination.

Interesting! You clearly have a pretty good understanding of the function of the electrolytic capacitor, which I suspect gives you a certain advantage of many of us! Would you like to share with us: a) How you spotted the 3 failed electrolytic capacitors; b) what caused their failure? This isn’t

Good work.  Good tracking the problem down to the root cause.  I see so many shops just hang parts until the problem goes away.  That method might be profitable for the shop - however, it usually ends up with a dissatisfied customer.  I have 3 pico scopes and use them all the time.
Good work. good story - well done.

This is real awesome. Any way never fear when PICO is near. Most definitely the best diagnostic tool.

In the photo of the ecm, can the failed parts be identified?