I was presented with this 1991 6cyl E36 325i BMW which had an on-going problem for the last two years and it seemed repairable. The complaint was lack of power, hesitation and the occasional cutting out on acceleration once warm.

First up was the test drive to confirm the fault. Sure enough, once warm, as I accelerated it bucked badly. A massive flat spot that was hard to drive through. This was also accompanied by what sounded like a lean backfire.

To me it appeared a definite lean fuel issue. And having six individual coils, the ignition system seemed an unlikely candidate.

Could this be easy pickings? A faulty MAF sensor was my first thoughts. But how could it be missed by so many? A quick scan revealed no codes to be logged so out with the PicoScope. My first choices to scope and the easiest to access, was the MAF, TPS and O2 sensor. This would help prove or disprove the MAF sensor to be at fault.

The results were not as expected. The MAF voltage did not appear to be unusually low but it was defiantly going lean on acceleration. I also noted at other times it appeared to stay in closed loop during WOT. 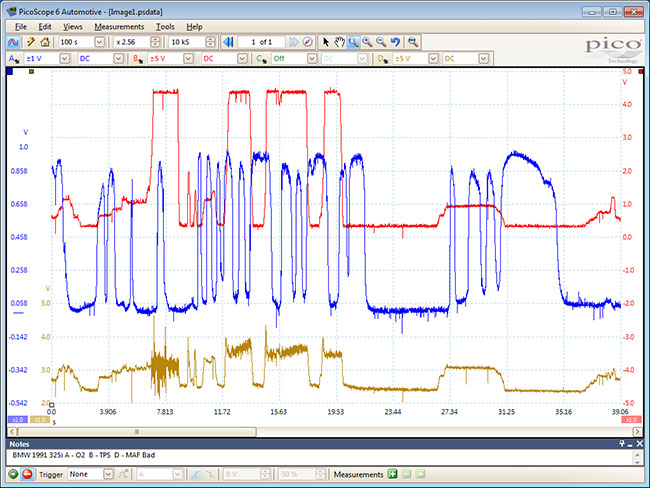 Ok, time to check fuel delivery. A quick volume and pressure test again gave no cause for concern.

Next thought was to do the same scope test but this time access the injector loom so I could observe the pulse width to confirm whether the ECU was trying to add fuel or not.

Bingo! Now I knew why I had a lean miss and flat spot. The injection was being cut….totally. A quick set up change proved it was not losing its power supply to the injectors. 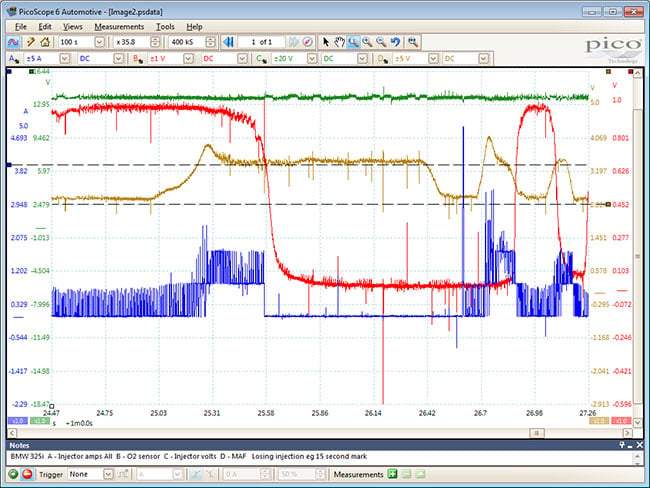 I next decided to check to see what was happening to the ignition. That also had problems; it was either totally missing or very erratic along with some double stacking on the coils.

This had to be some poor output from a crank or cam sensor. Nope, perfect. 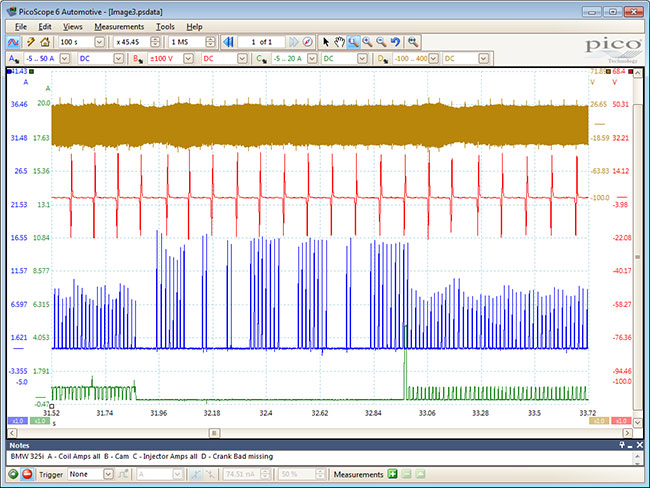 Perhaps the ECU? So I pulled out the ECU and checked the board. It did have evidence of water damage, but it was very minimal. Could this be the cause of all these symptoms? It was at this point the customer called to get the verdict. I told him what I had found and at the moment my thoughts were the ECU, but I wanted a bit more time to think about all the evidence. He then told me that BMW had also noticed the water damage and wanted to replace the ECU for $3000 but no guarantees’ of a fix. Also an $800 injector clean had been carried out and a substitute new MAF sensor had also been tried. All resulted in no improvement.

I then went back over my captures to look for some sort of a clue. Occasionally the poor ignition control seemed to have an odd regularity to it. I decided to check which coils were actually apart of this irregular regularity. Out of the front three coils, cylinder one followed by two always fired. Along with another two coils from the rear, this was the area of coil stacking. A clue perhaps?

Number two along with one of the rear coils seemed to fire last in this regular area of poor ignition control. So this time I connected up to the primary of number two to see if it revealed anything else. 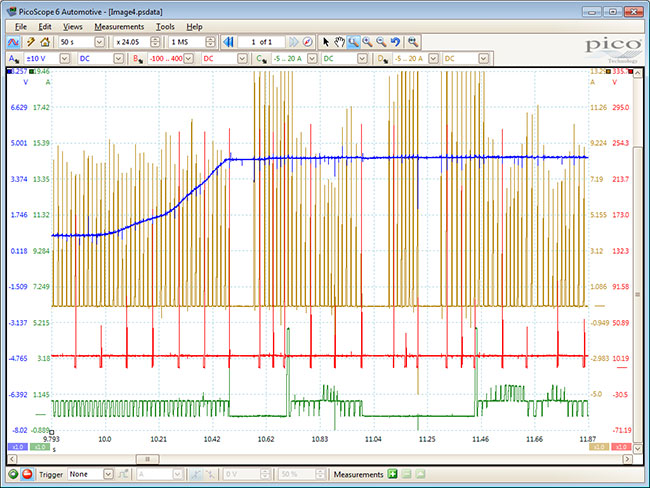 Immediately, I could see a problem. When the ECU shut down injection and ignition it was always preceding number two coil firing. Jackpot! I also proved this further by disconnecting number two coil. The vehicle now ran as expected apart from the single cylinder misfire.

The coil was replaced and the fault fixed.

Although only a coil was the fix, it certainly did not behave as a simple bad coil problem. Six other places had a crack at this and he had been charged a total of $1900 for no fix.
The car was handed back over to a very happy customer.

I personally don’t recommend switching coils while looking for the problem. I had one bad coil which had damaged my ECU’s in one section. I have changed switched coils and then bad coil damaged second ECU’s section. Only some time later I have found that no signal is coming form ECU to specific coils. I have replaced bad coil to good one, done some soldering for damaged ECU sections and Bingo, everything is OK.

Nice read, interesting find as well. I have a 323i that is cutting fuel to cyl 3 & 4 after I put my foot to the floor, it runs like death and idles horribly. If I turn the car off and on again it resets!? I switched the coils from cyl 3 & 4 to cyl 5 & 6, but the misfire remains at 3 & 4 indicating that it’s not a problem with the coils!? Any ideas?

This is great! I would love it if you could add more details. If you could describe what each trace was in the plots.
Also, I don’t know what “double stacking on the coils” means. I Googled but never figured it out.

Well if I was charged $1900 for a no fix I’d be suing. Also BMW wanting to charge for an ECU even if it wasn’t faulty! They’d be fined here. You need to get your consumer laws revamped. Re the problem, I would have thought a 1 coil misfire.

I hope you are now his expert, you certainly had the time to figure it out!!

Well done! You could have replaced the ECU for $3000 to no avail. Just proves the value of your pico scope.
Best regards
Brian.

Very useful insight, but you should mention where you connected the scope to get those signals.
Thank you.

Nice one!!
I know hindsight is a wonderful thing, but in the second scope picture the injector currents (blue) are all over the place.  Now I am assuming that the ECU is shutting down because of a high current load from coil 2.  Not sure what current range a BMW coil should be, but on the yanks i work on 6A is okay.
Perhaps there is an excessive current but I can’t see it.
In any case I would have amp probed each coil straight after that second picture.

Was excess current flow the reason for the shutting down?

I would be embarassed to charge for a no-fix in my work.. why can’t more automotive guys take this view, and prove a decent diagnosis before throwing expensive parts at the problem?