Amongst all the hi-tech, ultra-fast, multi-computing vehicles of everyday life comes a real gem from yester year that still requires a solid basic understanding of ignition systems and a PicoScope to confirm the ignition cycle in real-time.

The vehicle in question was a 3.8 E-type straight 6 cylinder that I have to say was a stunning example of this model and privilege to work with. Our customers concern was unstable idle speed, reluctance to rev, and horrendous backfiring with hesitation at wide open throttle (WOT [the default position for E-type drivers]).

The vehicle had been fully restored to factory condition a number of years ago and only ever came out for fun driving during the summer months. For almost nine months of the year the vehicle would never turn a wheel and this is a clue to the underlying cause of the symptoms.

Like all vehicles regardless of age a basic inspection was carried out to confirm connections, harness routing, fuel quality and fuel supply were all in place. Given the technology at the time of manufacture, this extended to checking the triple “SU” carburettors for sticking, along with the ignition points contact breaker gap and condition (how often do we say that now?). All the above proved to be fine and so I moved to checking the tuning condition of the engine bearing in mind the symptom of backfiring via the intake and the exhaust.

The ignition timing and dwell angle all proved to be correct and all triple carburettors drawing equal amount of air with very similar main jet seat positions. So on the surface all looks well, until I loaded the ignition system by applying WOT.

Reviewing the ignition captures using the replay feature of PicoScope Automotive it was easy to confirm that “distributor and rotor shaft wear” were NOT at fault because even though the misfire was clearly evident in our captured trace the dwell periods remained equal. Often at high rpm, wear in the distributor becomes noticeable due to centrifugal force being applied to the shaft which in turn alters the dwell angle, and so misfires develop. See below: 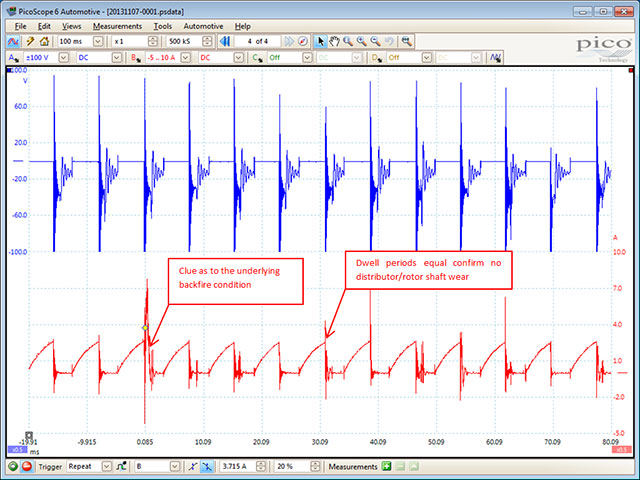 Armed in the knowledge that all previous checks were fine and that the dwell angle remained stable, closer inspection of the switching of the primary current revealed excessive, intermittent arcing at the contact breaker points under WOT during the switching stage of “coil on to coil off” which in turn has an adverse effect on the HT firing voltage and of course HT timing. See image below: 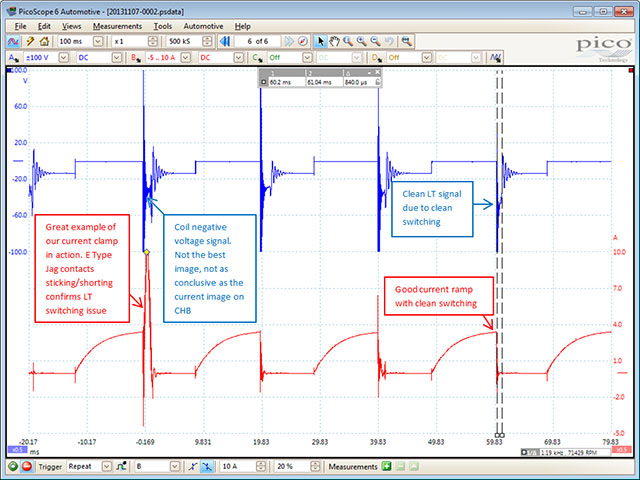 The corrosion within this circuit results in arcing acrossÂ  the contact breaker points that could not be absorbed by the traditional condenser as the path to earth under WOT increased in resistance with movement of the base plate under centrifugal advance. 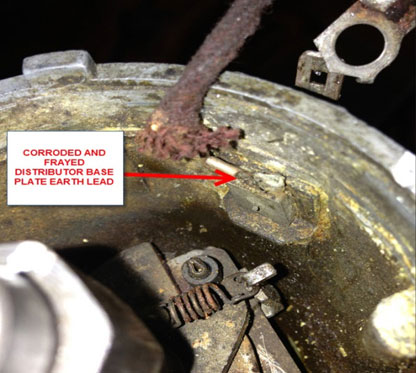 After weighing up the pros and cons of simply repairing the earth lead, and given the usage pattern of the vehicle it was recommended we install an electronic ignition kit that removes the earthing issues of the distributor from the equation.

The contact breaker points are replaced with an optical switch whose infrared beam is interrupted by a “Chopper Plate” installed just below the rotor arm, so removing any earthing issues relevant to the distributor. The interruption of this infrared beam provides the switch signal required to control the ignition coil via an external Power Module (a real get out of jail card for an old gem like this).
The vehicle was then reassembled, ignition timing set to manufacturers specification and the first WOT test was met with a beaming smile as the engine had been restored to its original free revving manner.

A high resistance at the distributor base plate resulted in a poor earth path for the primary ignition circuit, which could manage current with no load, but failed under load applied by WOT.
An interesting point to mention was the value of the current clamp when reviewing the ignition primary circuit. At a glance the ignition primary voltage looks the correct shape and form but the current pattern reveals the truth about the huge increase in primary current during the coil “switch off” stage. 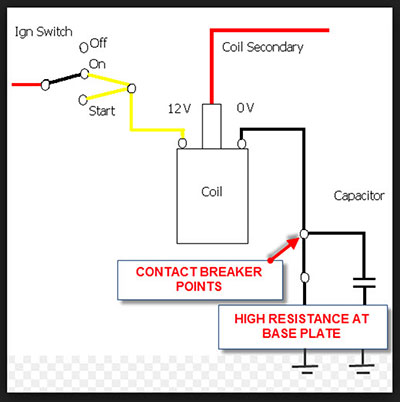 This was fantastic.  You reviewed the common causes of this issue, but were able to use the Pico Scope and current clamp to determine the problem.  I would typically think high resistance would cause low current, but if the amount of current exceeds the capacity of the condenser and ground path, then the excess voltage from a large magnetic field collapse would indeed look for another path, and that much voltage could push more current through an alternative path. Thanks for the great article!

As a complete amature using the pico, i find the various cases so fascinating and very very helpful.Many thanks to the technicians for taking the time to share the valuable experiences with us.

Excellent detective work! I would have first repaired the earth connection to prove the theory; then installed the optic unit for longevity.

Nice article Steve.
Did you capture any coil current and dwell waveforms with the new system doing the switching?

Very interesting.  I wonder how many Classic Cars are suffering from a less severe form of this problem

I shall be checking my 1967 Sunbeam Alpine before putting it on the road next year.

Many thanks for publishing this case history.

Not the first time I have seen arc problems either.  There is a heavy duty resistor in a massive china heat sink that can stop this, it allows you to keep the ignition system as original, which is required if entering concours. If the owner is not worried about competitions then this is a good but expensive fix.  The resistor and china heat sink are around Â£13 + VAT from Land Rover dealers

This reminds me of my early apprentice days when we were often called out to breakdowns for primary circuit faults - one I remember well on a Vauxhall viva - the owner said he was an electrical engineer and said he had checked all the electrical circuits and found no fault. I therefore proceeded to adjust the points gap and off it went the owner quite bemused. He had been stuck for 2 hours on the Motorway it took me 10 minutes to get him going with a screwdriver and feeler gauge.

Another great presentation as well as a reminder of how simple cars used to be!
Interesting that you pointed out the advantage of installing electronic ignition in place of the points. This not only removed the problem of earthing, it would ensure that in future the points gap, dwell angle and ignition timing wouldn’t ‘wander off course,’ which was one the prime problems of early engine failure in that era. This was then actually a very common problem - along with others such as:  ‘seized’ base plates (due to too long a screw impeding the movement of the plate); punctured advance/retard modules, which for some unknown reason few mechanics bothered to check; dirty or greasy ignition points (even brand new!); excessive distributor cam wear; bent distributor shafts, etc.
The point here being that these were all visible using the monster analogue scopes that we used 30 years ago. However, in those days, we didn’t have the versatility of the digital scope, nor the ability to perform a road test without using a rolling road. (Having operated the latter in a specialised tuning centre it is easy to appreciate the value of the digital scope: particularly today in a form so well adapted to road testing. Faults which are not always apparent in the workshop under no-load conditions will show up under load, or indeed they can be replicated by driving the vehicle under the condition in which the fault presents.)
The scope, as is shown in this ‘Every Day Diagnosis’ enables us to ‘See’ what is happening, as well as to confirm the exact location of faults: be they caused by a simple earthing fault, or something less apparent - perhaps in another system!
The important thing to understand is how a component, circuit, sub-system, or entire system works, and what to expect from any one of them - individually, or together. The PicoScope allows the user to better understand the workings of all of these and to rapidly prove the existence and location of a fault, because the results are displayed and then ‘captured’ and can be further analysed by scrolling back, and by greatly magnifying the point of interest, automatically saved by the software.
In summary, the oscilloscope is today perhaps the single most important tool in the arsenal of today’s automotive technician’s tool box! Remember, the scope isn’t just a tool for measuring electrical circuits. Its uses are numerous and Pico Diagnostic kits are able to help quickly diagnose the majority of faults in other circuits - not just engines - on any type of vehicle and on almost all vehicle systems. You can use the scope to quickly verify the condition of an engine and for example to perform a relative compression check; to measure pressure, temperature, frequency - not just voltage or current. The uses of the PicoScope Kits are too numerous to list here.
I enjoyed your article: well done.
David Paterson

Well Done, Reminds me of the good old days when issues like this were a little easier than today.Keep them coming.nev

I’m a bit puzzled here.
I cannot see how a high resistance ground connection can cause the coil primary current to increase beyond it’s normal 12V/Coil R.  You can see on Channel B the coil primary current rising exponentially as you would expect towards a maximum which would then be limited by the coil primary resistance. The fact that current has levelled off and has virtually reached a maximum would imply that there was little additional resistance in the circuit as otherwise the current would still be rising. (t = L/R) Those sharp periodic increases in primary current surely had to be due to another problem.  Sadly, It seems to me that you overcome the real fault by changing to an electronic system. It makes sense to go electronic but I don’t think you got to the real cause in this instance.

Ensuring a good earth was always a check to be carried out on point type distributors. It was par for the course to re-earth with a flylead, especially on MotorCraft distributors. The Austin Rover B series engines distributor had a water hose immediately above it. Several times I came across a distributor body insulated from engine earthing by congealed coolant.