The purpose of this test is to evaluate the operation of a zirconia type oxygen sensor during engine running conditions based on its output voltage and response time. 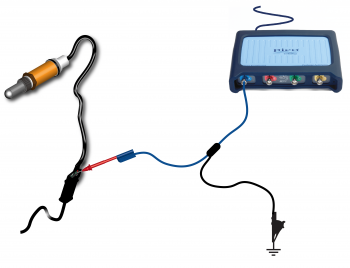 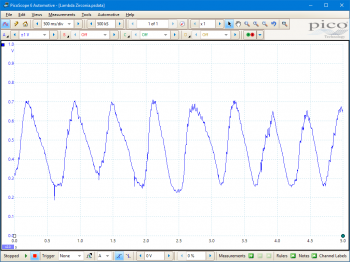 Go to the drop-down menu bar at the lower left corner of the Waveform Library window and select Oxygen / O2/ Lambda sensor. 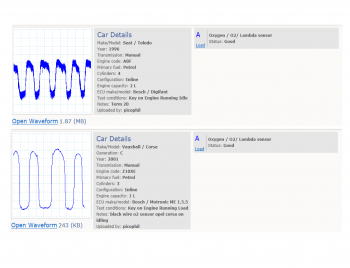 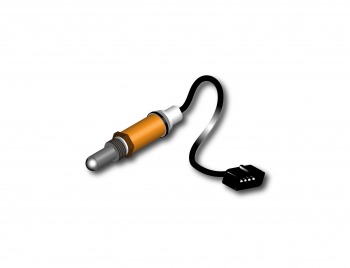 An oxygen sensor also can be referred to as a Lambda sensor, an O­2 sensor, or a Heated Exhaust Gas Oxygen (HEGO) sensor. It is a feedback sensor used by the Engine Control Module (ECM) to perform closed loop control of engine fueling and, if a post catalytic converter sensor is present, monitor catalytic converter function.

Closed-loop control allows an ECM to maintain an almost exactly stoichiometric air/fuel mixture but with small variations between slightly rich and slightly lean to facilitate 3-way catalytic converter operation. These fueling variations cause the switching observed in the sensor voltage output. Typically, an ECM will switch the air/fuel ratio at a frequency around 1 cycle per second.

An ECM only undertakes closed loop control of fueling when the appropriate conditions allow. This is normally during steady-state idle, light load, or cruise operations. When the engine systems are warming up or the vehicle accelerates, the mixture is enriched and the sensors will not exhibit their switching output behaviour.

A zirconia element within the sensor allows ionized O­2 to flow from a reference air source to the exhaust gas. The flow is detected by two platinum electrodes either side of the element. The flow rate depends on the partial pressure (the relative O­2 concentrations within the reference air source and exhaust gas). A rich mixture will cause a greater flow of ionized O­2 across the zirconia element, whereas a lean mixture will cause a low flow. Therefore, a lean mixture is indicated by a low output voltage, around 0.2 V, whereas a rich mixture is indicated by a high output voltage, around 0.8 V.

In general, oxygen sensors will not operate below around 300 °C. As such, some sensors have an internal heating element, which is controlled by the ECM. The heating element raises the temperature to ensure faster control when starting from cold.

The sensors have varying electrical configurations and may have up to four wires. Sensors without heating elements have only one or two wires. A three wire sensor uses the sensor casing to form an earth connection for the sensor element:

A constant high voltage output from the sensor shows that the engine is running constantly rich and is outside the ECM's adjusting range, whereas a constant low voltage indicates a lean or weak mixture. Under these conditions you can expect to see Diagnostic Trouble Codes (DTCs) related to fuel trim issues from the ECM. The sensor may not be at fault and you should ensure there are no associated issues causing the error codes before condemning the sensor.

Symptoms of a faulty/inoperative oxygen sensor:

Related issues that must be eliminated prior to testing an oxygen sensor: