The purpose of this test is to confirm that the turbocharger will produce a positive charge pressure during throttle opening. 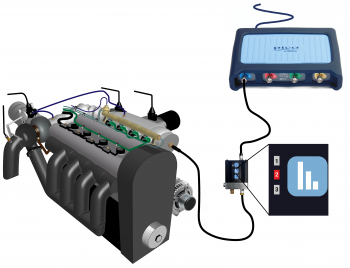 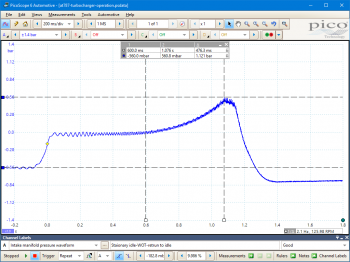 Channel A shows the intake manifold vacuum/pressure during the various stages of the test.

The orange arrow (at marker 4) denotes the initial delay from the start point of WOT to the commencement of positive pressure (at marker 5) building inside the intake manifold, referred to as Turbo lag. The example waveform shows that the test vehicle measures to approximately 600 ms.

The orange arrow (at marker 6) denotes the time taken for the intake manifold pressure to build to its peak of +560 mbar (at marker 7), from the initial increase at marker 5.

By adding the time indicated by the orange arrows at markers 4 and 6, you can calculate the total time taken to achieve maximum manifold pressure (boost pressure) from the initial WOT at marker 2. (Approximately 1.1 seconds on our test vehicle.)

The purple arrow (at marker 7) denotes the maximum positive manifold pressure (above atmospheric) produced by the turbocharger. The boost pressure.

Applying WOT, with the engine at the correct operating temperature, should result in an instant decrease of the manifold vacuum, reverting to the atmospheric pressure (0 mbar) indicated by the green line at marker 3.

At approximately 360 degrees of crankshaft rotation, you can see the commencement of the intake pocket dropping below 0 bar indicating the cylinder pressure to now fall into a vacuum. This indicates adequate sealing of the exhaust valve that will now close as the piston descends the cylinder during the intake stroke. Valve timing, the integrity of the air intake, piston compression rings and cylinder face, can also be confirmed by looking at intake pocket. The depth of the intake pocket (the vacuum level) can be measured with the signal ruler (marker 5) and the value displayed in the ruler legend (marker 4) at -698.6 mbar.

From the instant the throttle is held wide open, an inevitable delay will be experienced before the commencement of positive pressure building inside the intake manifold. This is referred to as Turbo lag. The example waveform shows that the test vehicle measures to approximately 600 ms. (indicated by arrow with marker 4).

Given the engine speed is high but falling after the WOT test (throttle now closed) the intake manifold vacuum continues to rise above the stable idle speed level (at marker 1) to form the intake pocket. Here you can further confirm the mechanical efficiency of the engine and the integrity of the intake system. A small intake pocket could indicate a mechanical defect or intake leak. For more accurate analysis of the intake pocket, refer to Pressure Sensors > WPS500X Pressure Transducer > Intake Manifold Pressure-WOT Snap Test pre-set on the Automotive menu.