The purpose of this test is to investigate the action of the throttle positioning motor and position sensor at various engine speeds. 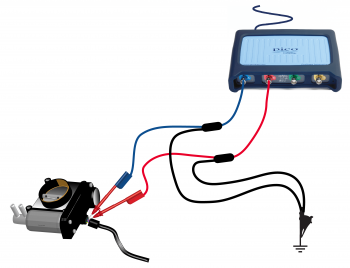 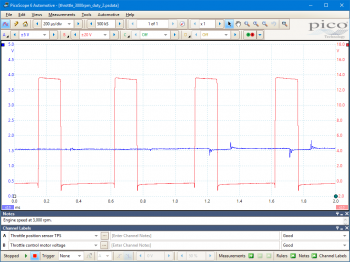 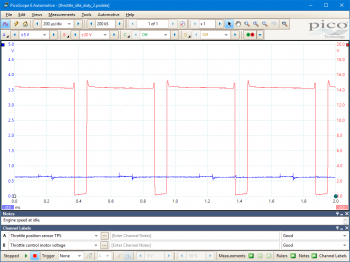 The hash on the TPS signal output, in both example waveforms, is due to ignition High Tension (HT) interference and should not be considered a fault.

Go to the drop-down menu bar at the lower left corner of the Waveform Library window and select, Throttle control motor voltage 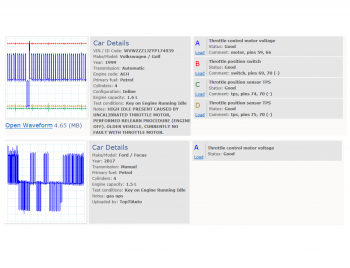 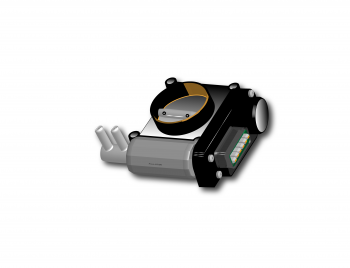 Throttle servomotors have been fitted to throttle butterflies for several years and are now commonplace on drive-by-wire engine management systems.

The twin TPS outputs are constantly monitored against each other and any discrepancies are logged as a fault code, causing the Malfunction Indicator Light (MIL) to illuminate. The vehicle's ECM digests all the information from the sensors and determines the angle of throttle opening. This information is sent to the throttle servomotor in the form of a square wave whose duty cycle depends on the angle of throttle butterfly opening. The signal sent to the servomotor has what is called a low duty cycle, which is a measure of the off time or the percentage of time the actuator receives zero volts. (A system that operates in the opposite direction is measured in terms of its high duty cycle, which is the percentage of time that the component receives a supply voltage compared to the off time.)

The example waveform in Figure 2 shows a lower low duty cycle of 15.65% while, in Figure 3, the waveform has been altered to increase its low duty cycle to 71.34%. These figures are for the vehicle being tested and will differ between motor vehicle manufacturers. The relevant technical data should be sought if the vehicle being tested has an engine speed-related problem.

Throttle servomotors are an ideal systems application when used in conjunction with both cruise control to maintain a predefined road speed and traction control systems to limit the power available to the road wheels.

To prevent a faulty sensor from causing an incorrect throttle opening for a given set of inputs, which would cause a safety problem, failsafe settings are installed in the vehicle's ECM.

Our test vehicle was a 2002 Volkswagen Golf with a 10-pin multi-plug. No pin data was available.

It’s nearly impossible to find well-informed people
on this topic, but you seem like you know what you’re talking about!
Thanks 우리카지노계열