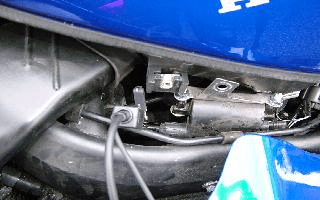 Note: This test is for the positive-fired HT on a wasted-spark coil pack.

Plug the secondary ignition pick-up lead onto Channel A of the scope. Clamp the pick-up around a positive HT lead. It may also be possible to use the HT probe. The HT pick-up connection is illustration in Figure 1.

In this example the fuel tank securing bolts had to be removed and the tank carefully lifted slightly. The coil pack retaining screw was also removed to gain access to the wasted spark coil pack HT wires. 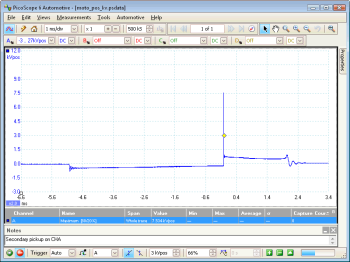 When the positive-fired plug kVs (kilovolts) are recorded on a 'double-ended coil' system, the voltage seen on the waveform should be in the 'upright position' and not inverted as this would suggest that the inappropriate HT lead has been chosen.

The plug voltage while the engine is running should continuously fluctuate and the scope picture move up and down. To record the maximum voltage seen at the spark plug, the voltage should be taken from the 'Ch A: Maximum (kV)' reading at the bottom of the screen.

The second part of the waveform can be seen running at approximately 1.5 kV, which is known as the sparkline voltage. This second voltage is the voltage required to keep the plug running after its initial spark to jump the gap. This voltage is proportional to the resistance within the secondary circuit. The length of the line can be seen to run for approximately 1.4 ms. This is the spark duration, the length of time the spark is flowing across the plug gap.

It is worth remembering that a positive-fired spark plug will require a greater voltage to fire it than a negative-fired plug. This is due to electron flow when the metal surface of the plug gets hot and 'boils away' negative electrons. This process is called thermionic emission. This can be seen as greater wear on the plug's electrode than for a negative-fired plug.

The voltage measured at the spark plug is the voltage required to jump the plug gap in varying conditions. This voltage will be determined by any of the following:

The plug kilovolt (kV) requirement of older engines tend to be lower than that of the modern engine, as the later designs run higher compression ratios, leaner air / fuel ratios and larger spark plug gaps.

Modern engines with double-ended coil systems invariably have the advantages of a constant-energy electronic ignition system.

Double-ended coil system have their own disadvantages (over coil-per-cylinder systems) by having half of the plugs firing with an acceptable negative voltage, while the other half are fired by the less acceptable positive polarity. This will have the effect of greater plug wear on the positive-fired plugs.

This system, because of its nature, fires the plugs each revolution, instead of every other, and is known as a wasted spark system. This does not mean that the plugs will wear at twice the normal rate, as the wasted spark is on the exhaust stroke and is therefore under no compression. If the spark plugs are removed after several thousand miles and examined, two of the plugs will have relatively square electrodes, while the plugs that have been fired positive will have pronounced wear.