The purpose of this test is to investigate the operation of a Hall Effect Road Speed Sensor based on output voltage and frequency in response to road speed. 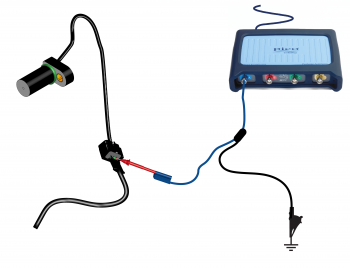 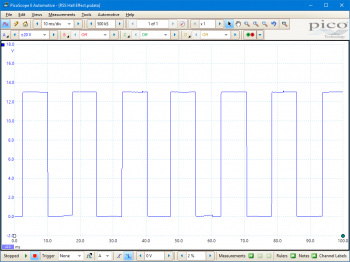 The Control Module has the ability to adjust the engines idle speed when the vehicle is slowing or stationary by using information from the Road Speed Sensor (RSS).
The sensor is a 3 wire device and will have a supply at battery voltage, an earth and a digital square wave output also switching at 12 volts.

With the appropriate electrical connection made to the RSS output, raise one wheel with a trolley and place an axle stand under the suspension unit. Start the engine and select a gear, a waveform switching from 12 volts to zero should be seen. As the road speed is increased the frequency of the switching should be seen to increase. This change can also be measured on a multimeter with frequency capabilities.

Go to the drop-down menu bar at the lower left corner of the Waveform Library window and select, Road Speed Sensor RSS. 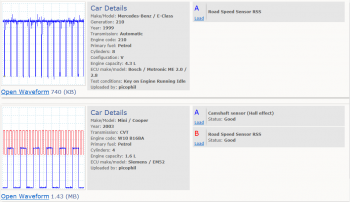 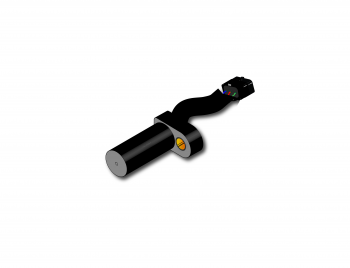 These road speed sensors are now common place on many of today's modern motor vehicles, their function is to provide information to the Engine Control Module (ECM) monitoring the vehicle's momentum.
The control unit now has the ability to determine the idle speed when the vehicle is slowing or stationary and not at any other time during the vehicle's journey. The sensor will be located on either the speedometer drive output from the gearbox or to the rear of the speedometer head.

A typical road speed sensor or Vehicle Speed Sensor (VSS) will produce either an analogue output from a magnetic inductive sensor, or a digital square wave from a voltage driven unit. These sensors can be either a Hall effect device with 3 electrical connections or a Reed switch with 2 connections.

Figure 2 shows a typical road speed sensor which is mounted between the gearbox speedo drive and the speedo drive cable.

The testing of the inductive pick up is identical to a crank angle sensor, resulting in a sine wave and the normal resistance testing. The Hall and Reed switches will provide a square wave and like the inductive sensor, the waveforms can be viewed on an oscilloscope.

Thanks for your comment about Road speed sensors and feel this sensor is called many different names by many vehicle manufacturers and at the time of writting this test this was used most commonly used name.

When you refer to an RSS in the guided test, do you really mean VSS (vehicle speed sensor)? If you search the internet for RSS or road speed sensor, you don’t get any results. I would like to test my VSS and want to make sure that RSS is the proper guided test.