The purpose of this test is to examine the primary voltage and current within a 3 wire coil on plug unit. 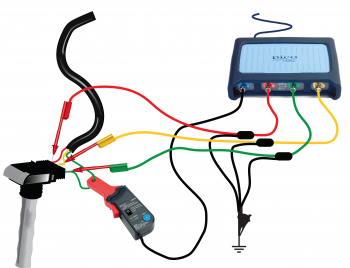 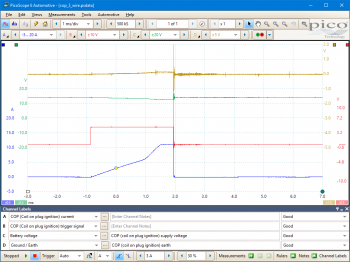 The example four-channel waveform, above, shows the current-limiting circuit in operation. The current switches on as the dwell period starts and rises until approximately 11 amps is reached in the primary circuit. At this point the current is maintained for a brief period of time and then released at the point of ignition. The length of time from the initial switching-on point to the moment the current is released depends on engine speed. The lower the engine speed, the shorter the current ramp; then the ramp lengthens with increasing engine revs.

The low-tension (LT) signal switches between zero volts and about 5 volts. When the trigger signal goes high, it causes the coil to switch on. As the voltage returns to zero, the current in the coil's primary winding switches off, the magnetic flux surrounding the winding collapses, this induces a voltage in the secondary and the coil's HT is fired.

The switch-on (zero rising to 5 volts) and switch-off (5 volts to zero) points are determined by the vehicle's Electronic Control Module (ECM). This interval between these events is called either the dwell period or the saturation time. The dwell period on an engine with electronic ignition is controlled by the current-limiting circuit in the amplifier or ECM. The time taken for the coil to reach saturation is about 3 milliseconds in our example. 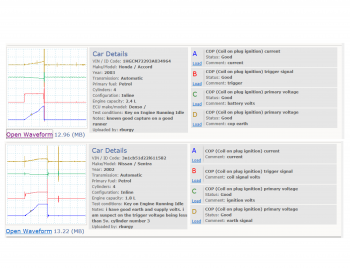 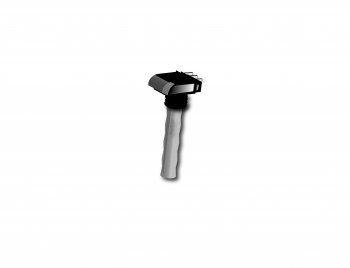 The example waveform shows the current limiting circuit in operation. The current in the primary circuit switches on as the dwell period starts, and rises until a level of 11 amps is reached. This current is maintained until it is released at the moment of ignition.

The switch-on (zero rising to 5 volts) and switch-off (5 volts to zero) points of the coil are determined by the vehicle's Electronic Control Module (ECM). The time between these points is called either the dwell period or the coil's saturation time. The dwell period on an engine with electronic ignition is controlled by the current-limiting circuit in the amplifier or ECM.

The earth connection is essential to the operation of any electrical circuit in an engine. As the current increases, so does the voltage drop on any given electrical circuit. An earth return circuit can only be tested while the circuit is under load, so simple continuity testing to earth with a multimeter is inaccurate. As the coil's primary circuit is only complete during the dwell period, the voltage drop should be monitored during this period.

The voltage ramp on the earth signal should not exceed 0.5 volts. The flatter the waveform the better: a waveform with virtually no rise shows that the amplifier or module has a perfect earth. If the ramp is too high, the earth connections need to be investigated to identify the offending connection.