The purpose of this test is to examine the primary voltage waveform from a 2-wire Coil on Plug (COP) unit. 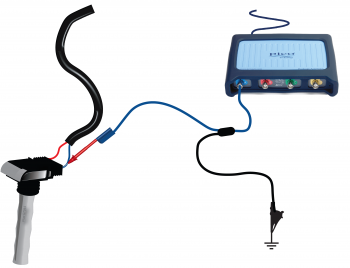 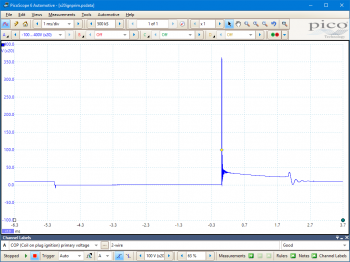 The ignition primary waveform is measuring the negative side of the ignition coil. The earth path of the coil can produce over 350 volts.

Within the primary picture there are several sections that need closer examination. In the waveform shown, the horizontal voltage line at the centre of the oscilloscope begins fairly constant at about 40 volts, but then drops sharply into what is referred to as the coil oscillation.

Go to the drop-down menu bar at the lower left corner of the Waveform Library window and select, COP (Coil on plug ignition) primary voltage. 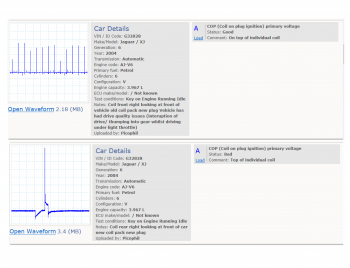 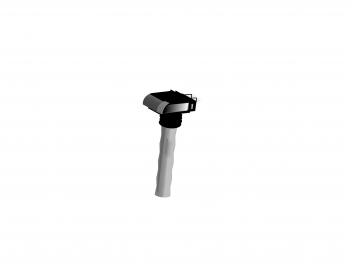 This principle starts with a magnetic field being produced, as the coil's earth circuit is completed by either the contacts or the amplifier providing the coil negative terminal with a path to earth. When this circuit is complete, a magnetic field is produced and builds until the coil becomes magnetically saturated. At the predetermined point of ignition, the coil's earth is removed and the magnetic field collapses. As the field inside the coil's 250 to 350 primary windings collapses, it induces a voltage of 150 to 350 volts.

The induced voltage is determined by:

The dwell period is defined as an angle: with contact ignition, this is determined by the points gap. The definition of contact ignition dwell is: 'the number of degrees of distributor rotation with the contacts closed'.

As an example, a 4 cylinder engine has a dwell of approximately 45 degrees, which is 50% of one cylinder's complete primary cycle. The dwell period on an engine with electronic ignition is controlled by the current-limiting circuit within the amplifier or Electronic Control Module (ECM).

The dwell angle on a constant-energy system expands as the engine speed increases, to compensate for a shorter period of rotation and maximise the strength of the magnetic field. The term 'constant energy' refers to the available voltage produced by the coil. This remains constant regardless of engine speed, unlike contact ignition where an increase in engine speed means the contacts are closed for a shorter time and the coil has less time to saturate.