The purpose of this test is to evaluate the operation of a multi-point port injector based on current flow, response, and formation during engine run conditions. 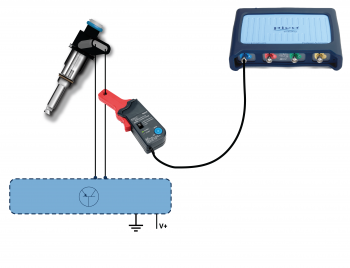 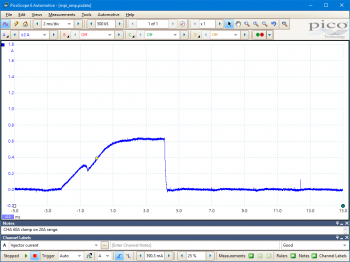 Go to the drop-down menu bar at the lower left corner of the Waveform Library window and select Injector current. 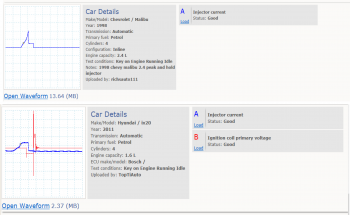 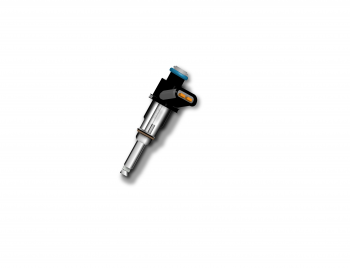 An indirect injector is used to deliver the correct quantity of atomised fuel to the air in the inlet tract, as it is drawn through to a cylinder.

A multi-point injection system has one injector per cylinder supplied by a common fuel rail. As the rail pressure regulator maintains a constant pressure difference between the injectors’ fuel inlet and outlet to the manifold, the injected fuel quantity depends only on injection duration.

The ECM uses input signals from a range of sensors dependent on both system type and manufacturer application in order to calculate injection duration.

Indirect-injection fuel injectors employ solenoid-controlled valves, which work against a spring force acting to close them. The valves open when sufficient current flows through their circuit. The injector valve will not open fully if there is insufficient current.

An ECM, or dedicated control module, dictates the current flow in each injector circuit by switching in and out the individual injector earth paths.

When current flows, an injector solenoid builds and stores energy, until it is saturated. When the current flow stops, the stored energy is returned to the circuit, inducing a large voltage spike. The voltage spike varies from vehicle to vehicle; some injector circuits include a Zener diode or a resistor-capacitor combination that limits, or squares off its peak.

There are two types of multi-point injection system:

Sequential systems fire injection pulses each 720° of crankshaft rotation to coincide with the opening of each cylinder inlet valve. Injection durations range from 4 to 5 ms at engine idle.

Simultaneous systems fire all the injectors together in an inline engine arrangement, or each bank of injectors in a ’V’ arrangement, twice every 720° of crankshaft rotation. In these systems, less fuel is injected per injection, therefore their injection durations are reduced to around 2.5 ms at engine idle.