The purpose of this test is to examine the primary current and dual driver voltage signals from a Multi-Coil-on-Plug ignition unit. 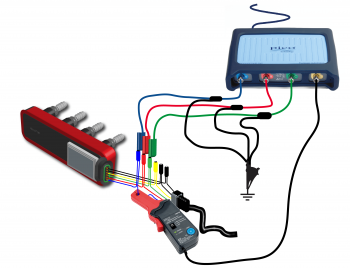 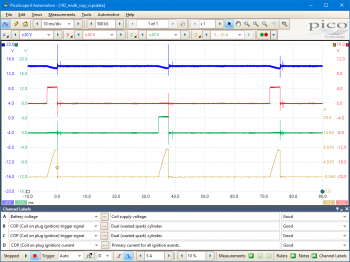 The example waveform is a typical picture from an engine fitted with electronic ignition. It was taken from the coil on plug unit on the Vectra Z22SE Engine.

The supply is at the battery or charging voltage of 12 volts or more: in this example, about 14.0 volts. When the coil's primary circuit is switched on, the voltage drops slightly, and as the current in the circuit increases to the target of 10 amps, the voltage drops accordingly. The final voltage is about 13 volts - 1 volt lower than the original voltage.

The example four-channel waveform, above, shows the current-limiting circuit in operation. The current switches on as the dwell period starts and rises until about 10 amps is reached in the primary circuit. At this point the current is maintained briefly and then released at the point of ignition. The length of time from the initial switch-on point to the moment the current is released depends on engine speed. The lower the engine speed, the shorter the current ramp; then the ramp lengthens with increasing engine revs. 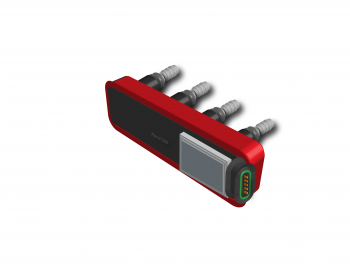 Distributorless ignition systems are fitted only to vehicles that have an even number of cylinders, such as 2, 4, 6, 8. This is because two cylinders are connected to one coil that can produce a spark in both cylinders at the same time. This is commonly known as a wasted spark system. The two spark plugs are arranged so that one is fired on the power stroke of the engine and the other on the exhaust stroke of the opposing cylinder, offset by 360 degrees. After a complete rotation of the engine the two cylinders are now on the opposite strokes and the two spark plugs fire again but with opposite roles to before.

On a four-cylinder engine, there are two coils with individual drivers and these tend to operate cylinders 1 and 4, and 2 and 3. This means there is a dual spark every 180 degrees, with one of those sparks wasted on an exhaust stroke of the opposing cylinder which is firing on the power stroke.

The only real difference between COP and other ignition systems is that each COP coil is mounted directly onto the spark plug, so the voltage goes directly to the plug electrodes without having to pass through a distributor or plug leads. This direct connection delivers the strongest spark possible and improves the durability of the ignition system.

The earth connection is essential to the operation of any electrical circuit in an engine. As the current increases in any electrical circuit, so does the voltage drop in the earth. An earth return circuit can only be tested while the circuit is under load, so simple continuity testing to earth with a multimeter is inaccurate. As the coil's primary circuit is only complete during the dwell period, the voltage drop should be monitored during this period. The voltage ramp on the earth signal should not exceed 0.5 volts. The flatter the waveform the better: a waveform with virtually no rise shows that the amplifier or module has a perfect earth. If the ramp is too high, the earth connections need to be investigated to identify the offending connection.

The example waveform shows the current limiting circuit in operation. The current in the primary circuit switches on as the dwell period starts, and then to about 10 amps. This current is maintained until it is released at the moment of ignition.