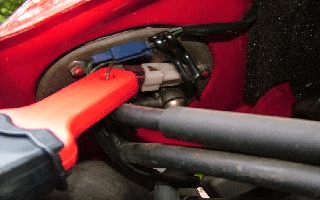 Plug the BNC moulded plug of the low-amp current clamp into Channel A of the scope. If the motorbike has a single fuse for the fuel pump, it may be possible to remove the fuse and use an extension fuse test lead to connect the current clamp. On our test bike the fuel and ignition systems share a common fuse and, although it is not recommended, we have had to release the fuel tank securing bolts to gain access to the pump's wiring, as in Figure 1. Extreme care should be taken to support the tank whilst the securing bolts are removed. 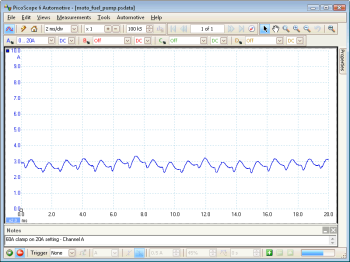 The normal operating pressure within this system is approximately 2 bar (30 psi) and at this pressure the current draw on the pump is 2 to 3 amps. The waveform should appear to be consistent with the 'peaks and troughs' being equal to one another.

This type of high-pressure fuel pump is called a roller cell pump, with the fuel entering the pump and being compressed by rotating cells which force it through the pump at a high pressure. The pump is capable of producing a higher pressure than the operating pressure and has a delivery rate of approximately 3 to 4 litres per minute. Within the pump is a pressure relief valve that lifts off its seat at a predetermined pressure. The pressure relief valve is there to arrest the pressure if a blockage in the filter or fuel lines or other problems cause it to become obstructed. The other end of the pump (output) is home to a non-return valve which, when the voltage to the pump is removed, closes the return to the tank and maintains pressure within the system.

Most fuel pumps fitted to today's motorcycles are fitted within the petrol tank and are referred to as 'submerged' fuel pumps. The pump is often located with the fuel gauge sender unit (when fitted).

Mounted vertically, the pump comprises inner and outer gear assemblies that together are called the 'gerotor'. The combined assembly is secured in the tank using a series of screws and sealed with a rubber gasket, or with a bayonet-type locking ring. Fuel passing across the fuel pump's armature will be subjected to sparks and arcing, which sounds dangerous, but the absence of oxygen means that there will not be an explosion!

The waveform in the illustration shows the current for each sector of the commutator. The majority of fuel pumps have 6 to 8 sectors and a repetitive point on the waveform can indicate wear and an impending failure. In the illustration a lower current draw can be seen on one sector and this is repeated when the pump has rotated through 720°. This example has 8 sectors per rotation.