The purpose of this test is to evaluate the operation of a piezoelectric knock sensor when subjected to a simulated engine knock. 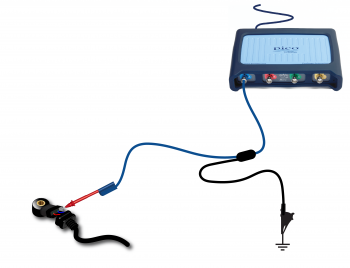 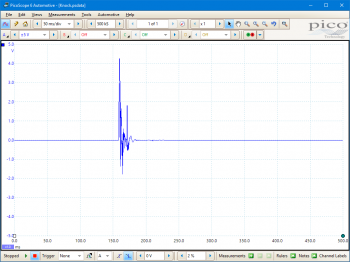 Go to the drop down menu bar at the lower left corner of the Waveform Library window and select Knock sensor. 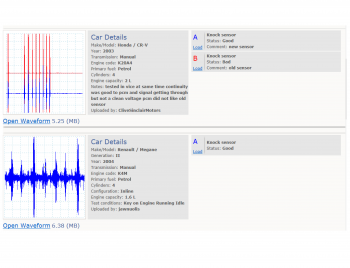 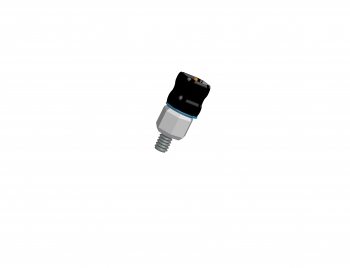 Knocking (also known as pinking, pinging or detonation) occurs in a spark-ignition engine when pockets of air-fuel mixture combust (explode) outside the area of the normal spark-initiated, flame-front driven, combustion process. The uncontrolled explosions cause structure borne vibrations (causing the characteristic pinking or pinging sound) which are detected by knock sensors mounted on the exterior wall of the engine block.

Knock is a problem, particularly in lean burning or high compression engines, as it can create excessive combustion chamber pressures. If it occurs too frequently or violently it can be highly destructive. The knock limit, the point at which knock becomes excessive, depends upon fuel quality and engine, operating and environmental conditions.

As continuously retarded ignition timing will cause less efficient engine operation and reduced power, most ECMs seek to step the ignition back towards a more advanced timing, up until the knock limit is reached (at which point the ECM will again retard the ignition).

Some sensors, dependent on application, may be found with three terminals. The third terminal provides a shielding cable for circuits one and two.

Resonant sensors, the earlier development of a knock sensor, are mechanically tuned to a narrow frequency. They can have a slightly higher voltage spike when tested. As the name suggests they continually resonate with their tuned peaks but this makes them susceptible to other noise sources containing the same excitation frequency.

Flat response sensors are able to detect a wider range of vibration from the engine. ECMs can continuously monitor their output to exercise much closer control of ignition. This type of sensor necessitates the use of a built-in open circuit detection resistor.

Knock occurs if any of the following are present:

Consistent engine knock, and associated sensor faults, may cause the following symptoms:

Other mechanical faults can produce vibrations that are interpreted by the ECM as knock (for example, dual mass flywheels having excessive play or if there is insufficient oil within the engine). Therefore, they can cause similar symptoms to those listed above.

Knock sensors can be susceptible to mechanical faults, such as:

Knock sensors and their circuits are also susceptible to typical electrical circuit faults, such as open or short circuits and high resistances.