The purpose of this test is to rapidly confirm the operation of the turbocharger, from idle speed through to a wide open throttle (WOT) "snap" test, then returning to idle speed.

This procedure is not a definitive test for your turbocharger. It does, however, confirm the presence of a positive pressure (above atmospheric) during the WOT snap test, confirming the rotation of the turbine and compressor shaft.

All numerical readings quoted in this help topic are typical and are not applicable to all engine styles.

All the values below are obtained with the WPS500X are referenced to gauge pressure.

Intake pressure before the throttle (air inlet side) is described here as atmospheric pressure = 0 mbar.

Intake pressure after the throttle (engine side, negative pressure) is described here as vacuum = below 0 mbar.

Intake pressure  after the throttle during the WOT snap test is described here as a positive pressure = above 0 mbar, Boost pressure

Make sure that the WPS500X is fully charged before you start this test. 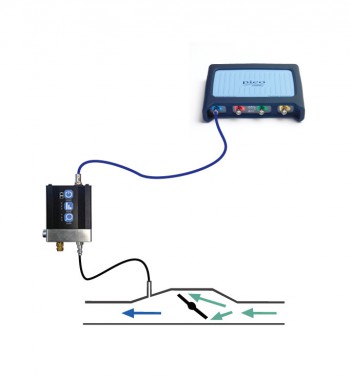 We advise that you recharge your WPS500X after each use to ensure it is ready for future measurements.

Channel A shows the intake manifold vacuum/pressure during the various stages of the test (steps 8 and 9).

The orange arrow (at marker 4) denotes the initial delay from the start point of WOT to the commencement of positive pressure (at marker 5) building inside the intake manifold. Referred to as Turbo lag. The example waveform vehicle measures 600 ms approx.

The orange arrow (at marker 6) denotes the time taken for the intake manifold pressure to build to its peak of +560 mbar (at marker 7), from the initial increase by marker 5.

By adding the time indicated by the orange arrows at markers 4 and 6, you can calculate the total time taken to achieve maximum manifold pressure (boost pressure) from the initial WOT at marker 2. (1.1 seconds approx. on our test vehicle.)

The purple arrow (at marker 7) denotes the maximum positive manifold pressure (above atmospheric) produced by the turbocharger, Boost pressure.

6. Elapsed time for intake manifold pressure to rise to maximum boost pressure from commencement at marker 5.

8. Rapid decrease in manifold boost pressure, falling below atmospheric pressure into a vacuum

9. Increased intake pocket during over-run–note the increase in manifold vacuum below the stable idle at marker 1.

Refer to the vehicle’s technical data for specific test conditions and results.

Applying WOT, with the engine at the correct operating temperature, should result in an instant fall in manifold vacuum, reverting to the atmospheric pressure (0 mbar) indicated by the green line at marker 3.

From the instant the throttle is help wide open, an inevitable delay will be experienced before the commencement of positive pressure building inside the intake manifold. This is referred to as Turbo lag. The example waveform vehicle measures approximately 600 ms. (indicated by arrow with marker 4).

6. Elapsed time from commencement of boost to maximum boost pressure

Given the engine speed is high but falling after the WOT test (throttle now closed) the intake manifold vacuum continues to rise above the stable idle speed level (at marker 1) to form the intake pocket. Here you can further confirm the mechanical efficiency of the engine and the integrity of the intake system. A small intake pocket could indicate a mechanical defect or intake leak. For more accurate analysis of the intake pocket refer to Pressure Sensors > WPS500X Pressure Transducer > Intake Manifold Pressure-WOT Snap Test pre-set on the Automotive menu. 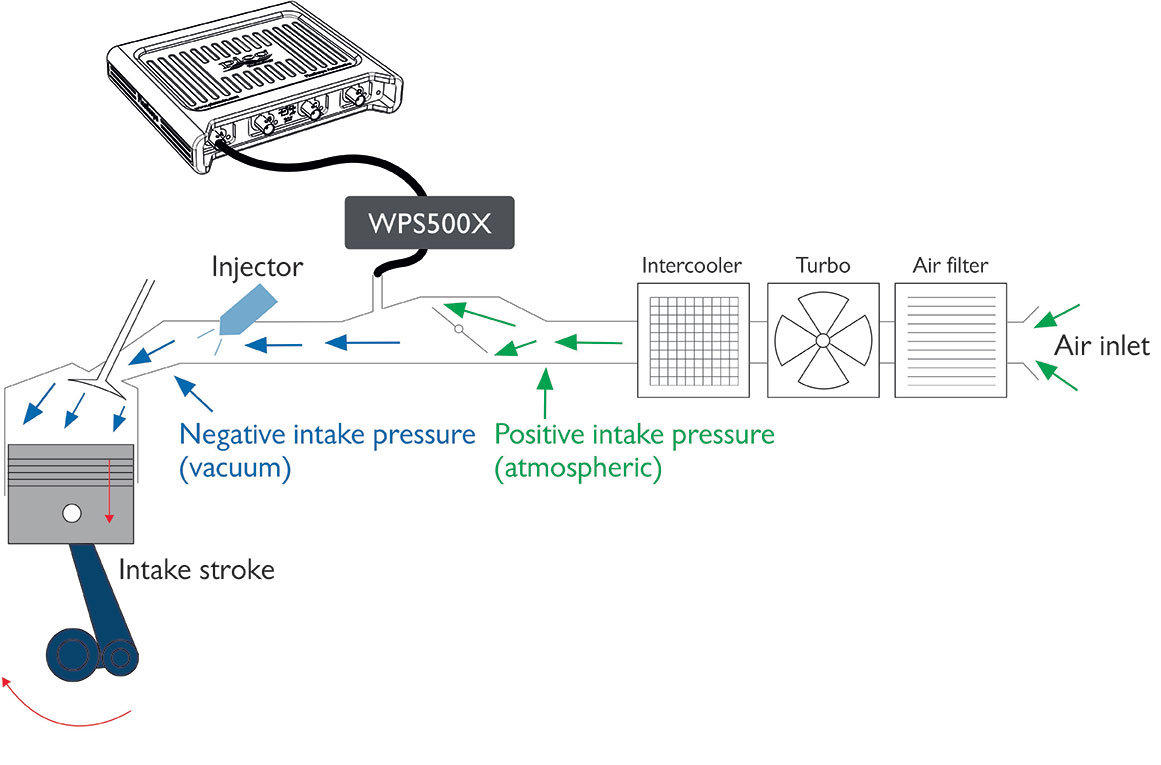 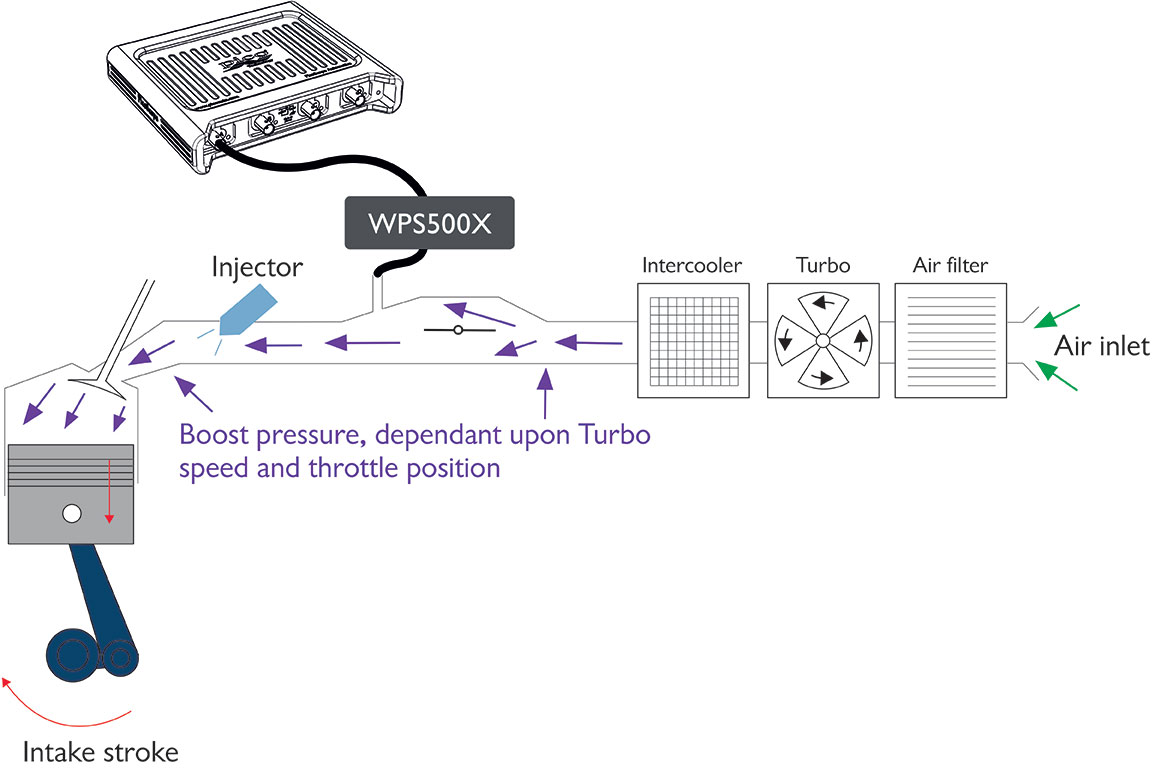 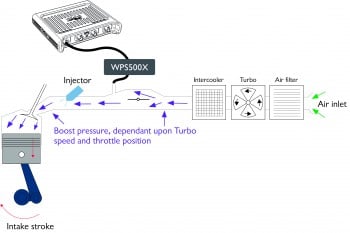 The turbocharger has been developed to provide a greater volumetric efficiency for a given engine size, or in other words, to improve just how efficiently air can flow in and out of the combustion chamber.

While we often associate the turbocharger with large high performance engines, modern emissions regulations have seen an increase in the use of turbochargers linked to smaller efficient engines with reduced cylinder counts and capacities.

The use of the turbocharger therefore allows for a reduction in engine weight, size and emissions without sacrificing performance, which can only result in an increase in turbocharger applications.

The compressor is mounted in the air intake of the engine, increasing the intake air pressure and volume as the compressor rotational speed increases.

There is, however, an inherent characteristic to be aware of with turbocharger operation. Turbo lag is the name given to describe the delay in response of the turbine and compressor shaft speed in relation to the volume of exhaust gases passing over the turbine. In order to provide the greatest boost pressure in the minimum time requires the engine to be subjected to wide open throttle (WOT) conditions producing high volumes of exhaust gasses directed towards the turbine assembly.

While the boost pressure will provide an increase in the volumetric efficiency, accompanied with an increase in power output, over-boost conditions put the integrity of the engine components at risk, and can result in severe engine damage.

By-passing the turbine is achieved by the use of a wastegate controlled directly by boost pressure applied to an actuator linked to the wastegate, or via the ECU applying pressure/electronic control signal to the wastegate actuator dependent of information received from the MAP sensor.

Do not switch off the engine immediately after revving as the turbocharger speed will remain high while the oil pressure supplied to the turbocharger will fall rapidly. This will lead to the undesirable condition of the turbocharger rotating at speeds in excess of 100,000 rpm with no oil supply/lubrication. After free revving a turbocharged engine, let the engine idle for 30 seconds before you switch it off.