The purpose of this test is to evaluate the intake manifold pressures of a naturally aspirated gasoline engine during cranking conditions using the WPS500X pressure transducer. 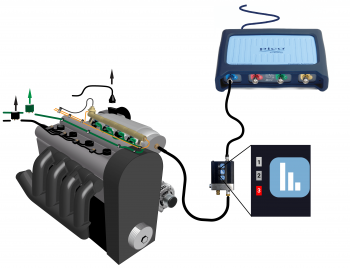 Some Engine Control Modules (ECMs) operate the throttle independently to the accelerator pedal position. This will alter your waveform. If this is the case, you will need to disconnect the throttle body connector and re-test. 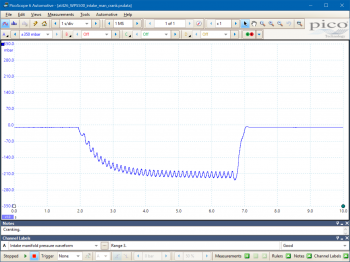 0 bar is expressed as a relative pressure and indicates atmospheric pressure.

The inlet manifold pressure is initially at 0 bar (atmospheric pressure) with the engine stationary.

The pressure drops below 0 bar once the engine has started to crank and an induction stroke has created the necessary conditions.

A series of negative pulses, depressions, occur as the engine continues to crank.

The depression amplitudes and frequencies increase as the engine speed increases.

During steady-state cranking, the peak depression amplitude is around -65 mbar and the intake manifold pressure consistently remains below 0 bar.

The inlet manifold pressure returns to 0 bar at the end of cranking.

A positive pressure peak, reaching around 40 mbar, and then a negative peak, immediately follow.

Go to the drop-down menu bar at the lower left corner of the Waveform Library window and select Intake manifold pressure waveform. 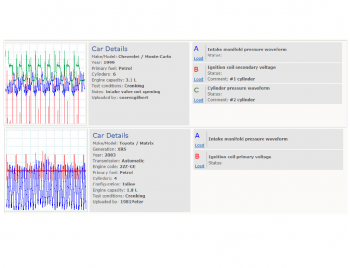 If engine speeds and throttle valve positions are known, we can use intake manifold pressure measurements to evaluate the air mass flow behaviour within an engine.

Please note: you should only make pressure value decisions based on comparison with manufacturer data.

Intake manifold pressure behaviour, during cranking, can be described, as follows:

The intake manifold pressure reflects the net effect of all cylinder and intake interactions. The relationships are complex; for example, two valve-overlap scenarios occur around the start of every induction stroke:

Although a uniform pattern should be apparent, the intake manifold pressure waveform characteristics cannot be accurately predicted without exact knowledge of the engine design.

Therefore, diagnosis relies mostly on the identification of periodic anomalies within the waveform. An observed anomaly provides sufficient justification for further investigation.

We can link typical faults to possible waveform effects, for example: