The purpose of the test is to check the relative compression of the cylinders within a hybrid vehicle's Internal Combustion Engine (ICE) using changes in cranking speed calculated from a Crankshaft Position (CKP) sensor signal. 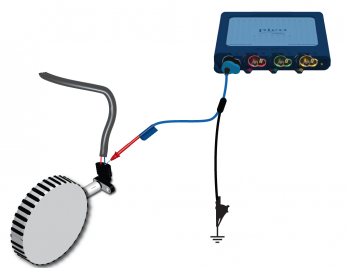 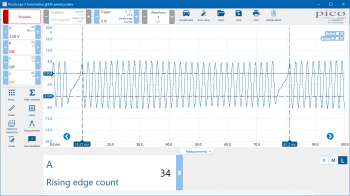 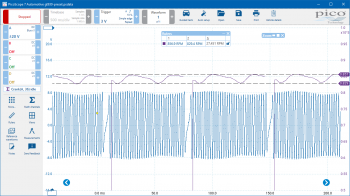 Using a Crank function in Math channels to visualise changes in cranking speed.

Typically, when testing relative compression within a conventional ICE, we look at the electrical load (voltage or current) placed on the (12 V) battery as the starter motor torque changes when the cylinders go in and out of their compression phases.

Hybrid vehicles (i.e. full hybrid, as opposed to mild hybrid vehicles) use a High Voltage (HV) Motor Generator (MG), connected to the ICE crankshaft, to crank the engine. It can be unsafe and/or highly intrusive to measure the electrical MG loads in these vehicles. However, as the engine speed will decrease and increase as the engine cylinders go in and out of their compression phase, we can use the CKP sensor to safely and non-intrusively indicate cranking speed and, therefore, relative compression.

Within PicoScope's Math channels feature, the built-in Crank function can be used to calculate the engine cranking speed from the CKP sensor output signal:

The Crank function requires the total tooth count, which is the number of teeth passing by the sensor within one complete crankshaft revolution after compensating for missing teeth (missing teeth are used as timing reference marks). Typically, engines will have tooth counts of either 36 or 60, respectively giving crank angle resolutions of 10 (360 degrees/36) or 6 (360 degrees/60) degrees.

Typically, two consecutive teeth are removed per crank rotation to provide a timing reference mark. Therefore, if physically counting (which is rarely possible) the number of teeth (e.g., around the flywheel circumference) you will need to add the two missing teeth to the physical count to get the total tooth count required for the Crank function.

Alternatively, you can take a prior measurement using PicoScope's Rising (or Falling) edge count Measurements feature, which will calculate how many physical teeth are present. You'll then need to add to the count to compensate for the number of missing teeth.

To calculate the Rising edge count, follow these steps:

With the tooth count and channel entered correctly, the Math channels Crank function will correctly display the crankshaft speed (see the example above).

A MG unit will crank the ICE at a much higher rate than a conventional 12 V starter motor system: In the example above, the calculated engine speed is approximately 840 RPM, giving the impression that the engine is running at idle. It isn't, it is just cranking more quickly than would be expected with a conventional ICE.

The Math channels Crank function example shows that the waveform's peaks and troughs should be uniform over several engine cycles. If one or more peaks is lower than the neighbouring peaks then it is possible there is a compression issue and further investigations are required.

Note, there is a drop out in the Math channels Crank function (engine speed) waveform when the CKP sensor signal passes through the crank reference position. This is normal and due to the way the crank speed is calculated. It can be ignored for the purposes of this test.