The purpose of this test is to evaluate the condition of the glow plugs and to check their operation time. 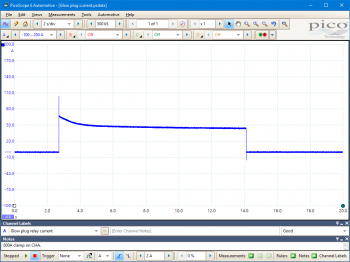 Go to the drop down menu in the lower left corner of the Waveform Library window and select Glow plug current. 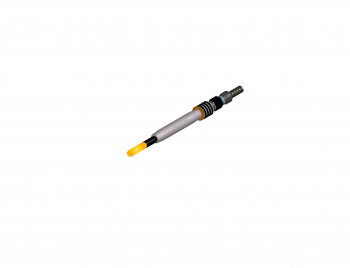 Glow plugs are designed to operate within temperatures from 850° to 1100° C. They are controlled by a relay switched by either the Engine Control Module (ECM) or by a dedicated glow plug control unit/timer. The system switching and on time characteristics will vary with vehicle.

Glow plugs also heat the cylinder charge to support the operation of diesel particulate filter (DPF) systems: a DPF requires very high exhaust temperatures during passive and active (either running or forced) regeneration processes. Any fault in the glow plug system will prevent regeneration and will inevitably lead to the excessive build-up of particulates in the filter and eventual blockage.

One of the main causes of glow plug failure is overheating. Therefore, some systems use Pulse Width Modulation (PWM) of the supply voltage to regulate the circuit current and to control glow plug temperature.

The expected circuit current is calculated by dividing the total power consumption of all glow plugs (individual plug wattages are available in the appropriate technical literature) by the circuit feed voltage (current = power / voltage).

It is important to be able to identify control system failures, such as those that might occur in the ECM, glow control module, or other relays, as a cause of glow plug failure.