The purpose of this test is to assess fuel injector activity using the First Look sensor by measuring fuel pressure regulator diaphragm fluctuations with the engine at idle. 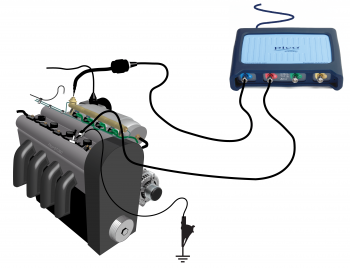 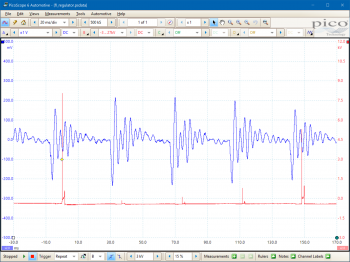 These waveforms have the following characteristics:

Go to the drop-down menu bar at the lower left corner of the Waveform Library window and select, Fuel pressure regulator pressure waveform. 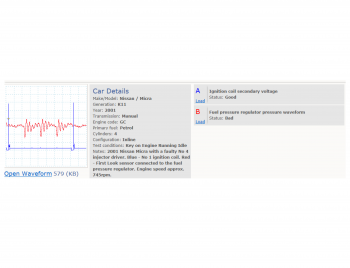 When an injector opens, fuel and pressure are lost from the fuel rail. This produces the first negative peak at the start of each pulsation event.

The action of the fuel pump causes a volume of fuel to flow into the rail and replace the injected fuel. Once the fuel volume has been replaced, the fuel’s inertia causes a rail pressure overshoot seen as the first positive pulse within each pulsation.

The remaining, decaying, oscillations result from complex fluid dynamic reactions as the fuel flow stabilises, and as the injector closes.

With constant engine operating conditions, the pulsations should start at precisely regular intervals and have equal peak to peak amplitudes.

The pulsations will occur in cylinder firing order.

A comparison of the initial peak to peak amplitudes across all pulsations will indicate whether the injectors are functioning equally and in a timely manner.

As the pulsations occur in cylinder firing order (in a sequential multi-point injection system), the cylinder number 1 reference (Channel B) allows us to identify which pulsation belongs to which cylinder’s injector.

In the example above, the pulsations are timely but the peak to peak amplitude of the first pulsation is lower than those in the next three pulsations.

As the test engine was a conventional 4-cylinder four stroke, with a 180° crank throw, a firing order 1-3-4-2, and sequential injection on its intake stroke, it is possible to identify the problem injector:

Typical symptoms that might arise from injector faults are:

Injector, or related, faults can be: