The purpose of this test is to evaluate the correct operation of the ECM and EDIS module based on the voltage and frequency of both the PIP and SAW signals during engine run conditions. 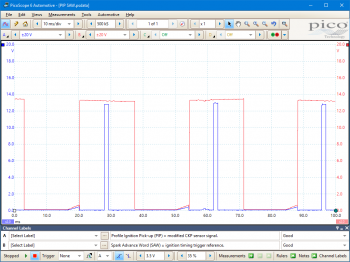 Profile Ignition Pick-up (PIP) is the signal sent from the Electronic Distributorless Ignition System (EDIS) to the Electronic Control Module (ECM). It is the digitally modified version of the alternating current (AC) signal that originates from the Crank Angle Sensor (CAS). The PIP signal is a squarewave switched at 12 volts and is the ECM's reference for the engine's speed and position. When received by the ECM, the PIP signal is modified to take into account the ignition's timing advance and is then fed back to the EDIS unit. The returned signal is called the SAW signal, and is in the form of a 5 volt squarewave.

Both signals can be seen in the example waveform with the PIP signal in blue and the SAW signal in red.

The EDIS module, fitted to the distributorless range of Ford vehicles, works in conjunction with the main EEC IV ECM. Its function is to collect the alternating current (AC) signal from the crank angle sensor and modify it into a digital square wave. This signal is known as the Profile Ignition Pick-up (PIP) signal. The PIP signal tells the ECM the exact position of the engine and this signal is then further modified into the Spark Advance Word (SAW) signal that is adjusted to compensate for any timing advance that the ECM decides is necessary.

The returning SAW signal to the EDIS unit determines when the earth return circuit is released from the coil negative in order to fire the coils.

As there is only one SAW signal that triggers the coil for cylinders 1 and 4, the point of ignition is calculated by the EDIS unit for cylinders 2 and 3. The ignition timing is set at 10° before Top Dead Centre (TDC) as its base setting, which occurs when the engine is cranking, at idle, or operating in Limited Operation Strategy (LOS).

If one of the SAW signals is outside its operating window, the EDIS module uses the width of the previous signal; if however, the unit sees 5 or more errant signals, the ignition timing reverts to 10° before TDC.

As with all double-ended coil configurations, a wasted spark system is used that fires the plugs even when they are on the exhaust stroke.

The above figure shows the basic wiring diagram for the EDIS system.