The purpose of this test is to investigate the operation of an inductive distributor pick-up based on voltage and frequency output during engine cranking and running conditions. 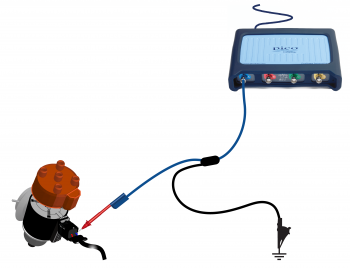 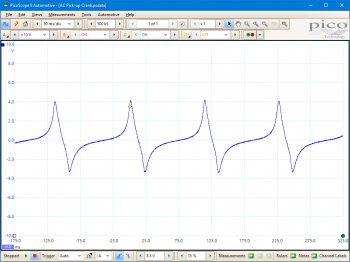 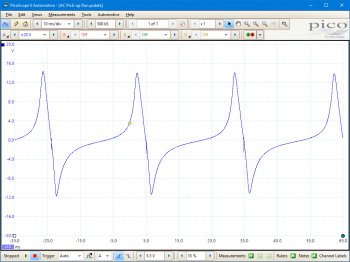 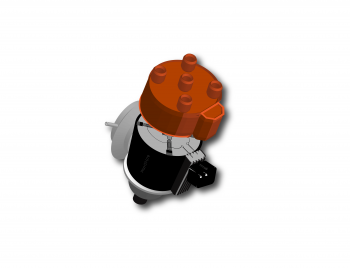 The function of a distributor pick-up is to provide a timing reference signal to the Ignition Control Module (ICM) or Engine Control Module (ECM) to indicate the mechanical dwell period for each ignition event.

The mechanism requires a rotating reluctor and a stationary pick-up coil with a magnetised core. The reluctor rotates at camshaft speed and has one activation pole for each engine cylinder. As a reluctor pole approaches, passes, and moves away from the stationary pick-up, a cyclic waveform is produced.

The rotational period between each cycle represents the maximum dwell period, during which the primary coil can be charged. The dwell advance, required for higher engine speeds, is controlled by a mechanical centrifugal flyweight assembly within the distributor.

As this system is mechanically driven and produces an inductive voltage (which increases with increasing magnetic field disturbance), the waveform amplitude and frequency increase with engine speed; however, the mechanical dwell rotational period (angle) remains constant.

The ICM or ECM, dependant on type, will rely on either positive, negative, or both pick-up signals to trigger the primary circuit driver transistor; however, the modules retain control of the actual primary dwell period and other charging parameters, such as current limitation, peak coil charge, and current cut-off.

These system design features can ensure that an ignition coil is not overheated by too much dwell or that the spark duration is not reduced by too little dwell. Similarly, the actual primary dwell period can be increased during cranking to compensate for the lower system voltage (to maintain the same overall coil charge).

These faults would manifest themselves as: