The purpose of this test is to examine both crank sensor and ignition primary voltage as a possible cause of engine misfire at high RPM. 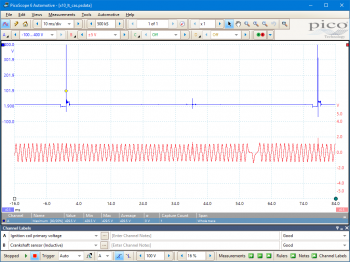 In this waveform we can observe the output voltage from the Crank Angle Sensor (shown in red) at the same time as monitoring the Ignition's Primary trace (shown in blue). The main reason for evaluating these two waveforms together is to identify the cause of any impending misfires at higher engine revs.

As the engine speed is increased, the distance between the reference point and the induced voltage alters due to the engine's ignition timing advance. The gap in the red trace is due to the 'missing tooth' in the flywheel or reluctor and is used as a reference for the Electronic Control Module (ECM) to ascertain the engine's position. Some systems use one reference point per revolution while others use two. The trace from the crank sensor should maintain a constant voltage at a given engine speed, while the primary ignition trace shows the firing of the ignition circuit.

Should the engine start to misfire at speed, ensure that the crank sensor signal is not breaking down: this may be seen as an intermittent trace or as a reduction in amplitude. If the CAS output remains constant, the primary picture may falter: this could be due to either a fault coil or amplifier. 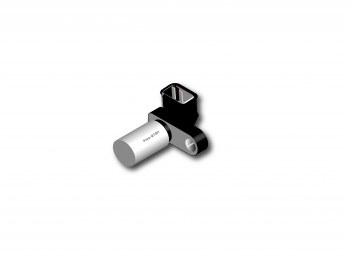 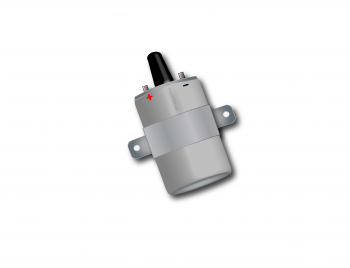