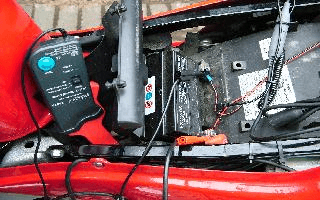 Connect the BNC end of the low-amp current clamp into Channel A of the scope and set the clamp to 20 amps if required. Place the clamp around the positive (+) battery cable with the + arrow facing the positive terminal of the battery, as in Figure 1.

Connect a BNC test lead into Channel B of the scope and then connect a small black clip to the negative end (black moulded). On the opposing cable end, positive (red moulded), connect a small red clip. Place the two clips on the correct polarity battery terminals, as in Figure 1.

In order to measure the charging current there needs to be a load on the battery. Turn on the headlamp main beam, brake lamp and heated grips (where fitted). 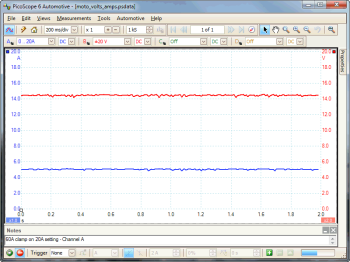 It is important that the alternator is capable of delivering the correct voltage and current output. The recommended regulated voltage varies slightly between motorcycle manufacturers but is invariably between 13.5 and 15.0 volts. It is equally important that the system is neither under- nor overcharging. The current available from the alternator also varies depending on the type of alternator fitted. The current depends on the state of charge of the battery and what loads are switched on. If the alternator has a specific problem that is reducing the current, such as a faulty diode, this is not seen when monitoring the current and does not cause a drop in the regulated voltage. It can, however, be found when the alternator waveform is monitored.

The objective of the charging circuit is to provide a regulated voltage to charge the battery and replenish the current consumed by the motorcycle's electrical circuits.

The rating of the alternator tends to be model-specific, as a basic model has less electrical demand than a motorcycle with typical 'top of the range' accessories such as electrically heated mirrors, heated grips, additional lighting, heated seat, and so on.

The alternator output, as the name implies, produces an alternating current (AC) output, which is rectified to direct current (DC) to provide the correct type of voltage to replenish the battery, keeping it at full charge.

The alternator has three internal windings wound 120 degrees between phases and requires nine diodes in a 'bridge' configuration to rectify the output. The voltage is controlled by a solid-state regulator that maintains the voltage at a predetermined setting of approximately 13.5 to 15 volts. The output current is determined by the requirement at the time. For example, a battery that has just been subject to prolonged cranking will receive a higher amperage output from the alternator than if the battery were fully charged.

The Rectifier/Voltage regulator is often a separate item. The regulated voltage can be measured on a multimeter. However, this reading can appear correct even if the alternator has a diode fault that reduces the output by 33%. The only true way to monitor the alternator output is to observe the resulting waveform on an oscilloscope.

When testing the charging circuit, ensure that the voltage, with all electrical loads applied, is between 13.5 and 15.0 volts. Assuming that all three phases are operating correctly, a lower than anticipated voltage can be caused by the voltage regulator protecting the battery against overcharging, or could be due to a faulty regulator or a faulty battery that is unable to accept the charge.